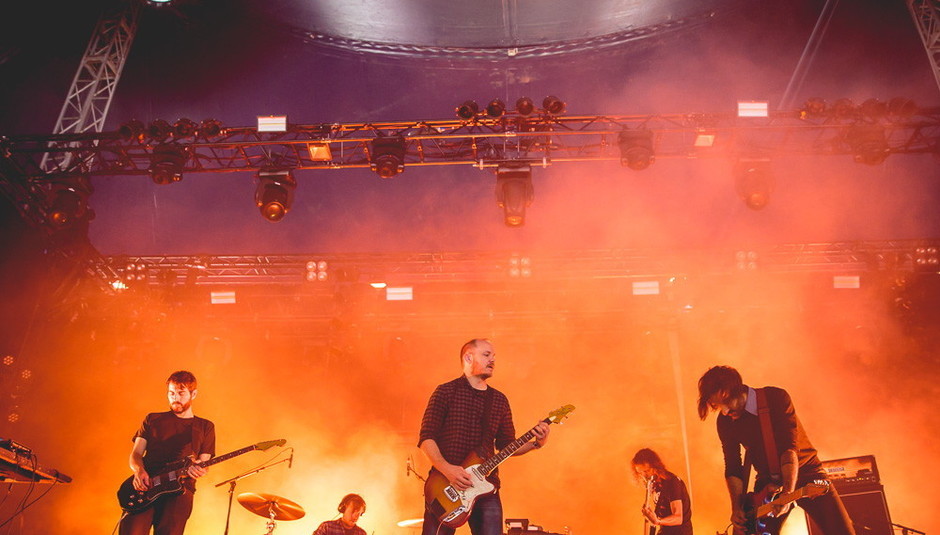 Earlier this month, DiS spent a weekend in the Dutch village of Hilvarenbeek, home to Best Kept Secret, which is fast becoming one of mainland Europe's most prestigious events. This year's line-up once again collected a mouthwatering list of impressive artists from around the globe, and even though the weather was wet and dismal for the most part, our spirits were never dampened.

Here's twelve things we learned at Netherlands' answer to Latitude.

Sometimes, a headline set can sink or flourish depending on what the artist chooses to play. And while not wishing to bemoan those that opt to play their latest record, it's the hits that always work best in this kind of context. So while Beck's last album Morning Phase wasn't a particularly bad one, that he only plays one song from it ('Blue Moon') and goes for the jugular instead with an hour and a half's worth of classics from his back catalogue pays dividends here. 'Devil's Haircut', 'The New Pollution', 'E-Pro', 'Sexx Laws', 'Loser', and a 'Where It's At' that's interspersed with snippets of 'China Girl', '1999' and 'Rapper's Delight' are just a selection of highlights from his Friday night headline show.

2. Editors are still huge in Europe

They really are. So much so that day tickets for Saturday were snapped up weeks in advance unlike the other two days, where it's still possible to pay on the door. When they take the stage the tumultuous roar out front is deafening, and from the start to the finish of their career spanning set the crowd's (or band's for that matter) enthusiasm never wanes. What's even more impressive is how well material from last year's No Harm is received, in stark contrast to the previous night's hitfest mantra.

3. Indie supergroups are the way forward

Unsurprisingly, a huge crowd has already gathered at Stage Two long before Minor Victories appear. Playing only their seventh show, this supergroup comprised of members from Mogwai, Slowdive, and Editors (Justin Lockey isn't with them today due to commitments with his main band) have created a wave of anticipation thanks to their excellent self titled debut and the live show is no less exhilarating. Their mesmerising eight-song set proves to be one of the weekend's highlights, particularly closing number 'Higher Hopes', which literally tears the roof off the tent, such is its intensity.

BEAK>'s Sunday afternoon set on Stage Three also goes down a storm. Although not technically a supergroup, Portishead's Geoff Barrow and his long term cohort on the project, Billy Fuller, construct motorik-infused dance music alongside new member Will Young, making his live debut this afternoon. Although recorded material tends to be few and far between, their live show is a minor revelation and one that keeps the indoor stage full to capacity even when the sun makes a rare appearance over yonder.

Nottingham duo Sleaford Mods seem to elicit a riotous reaction wherever they go, and their Saturday afternoon slot on the second stage proves no exception. Already full to capacity when they appear, the crowd bounce incessantly, crowd surf, chant the odd word they recognise back at Jason Williamson and Andrew Fearn, and generally have a whale of a time while the frontman rants about people and places they're likely to have never heard of.

Also creating a chaotic storm of their own are notorious psych punks Fat White Family, whose Sunday evening performance on Stage Five predictably incites a collision of sweaty, flailing bodies both on and off stage. With topless frontman Lias Saoudi as always the focal point, their now familiar set goes down a storm, providing a fitting finale to the weekend's proceedings. For yours truly at any rate.

There really aren't enough superlatives to describe Explosions In The Sky's breathtaking Sunday lunchtime performance on the second stage, but we'll try our damned hardest. Currently touring the European festival circuit, their fusion of post-rock, shoegaze, and abstract electronica holds no boundaries, and by the end a whole tent is simply transfixed by their presence and the glorious array of sounds emanating from the stage. 'Your Hand In Mine' and closer 'The Only Moment We Were Alone' from 2003's The Earth Is Not A Cold Dead Place resonate with a grandiosity not normally associated with such primitive surroundings, while the inclusion of fellow oldie 'With Tired Eyes, Tired Minds, Tired Souls, We Slept' in their seventy-five minutes long set draws ecstatic cheers from those present. Afterwards, random strangers ask: "Did you see Explosions In The Sky? They were great!" on more than one occasion. We don't reply as we're too awestruck to speak.

6. It's great for discovering new music

Although not exactly "new" in the most pedantic sense of the word, Kid Wave's late inclusion as Friday's openers on the fifth stage could have gone one of two ways. Fortunately it proved to be a blessing as those already aware of their catchy shoegaze-inspired grunge pop mixed with curious bypassers ensured they played to a packed tent, all of whom were nodding and jumping like loons by the end.

We probably should have been aware of Niger-born guitarist and singer/songwriter Omara Moctar before his late afternoon main stager set on Friday, given he's just put out his fifth long player under the moniker Bombino. Fusing math rock stylings with abstract jazz and traditional elements of West African folk, he proves to be one of the weekend's most majestic discoveries.

Canadian punks Weaves have been putting out music in various forms for a good three years now. However, their live show is something else altogether. Fronted by the diminutive Jasmyn Burke, whose onstage demeanour sits somewhere between Karen O, Beth Ditto, and Poly Styrene, their delightful amalgam of new wave post-punk pop is as exciting as its description sounds, with the weekend's first moshpit already in full swing.

London based outfit Ulrika Spacek might have one of the least enticing names on the bill, but their uplifting brand of shoegaze influenced spacerock is on another plane altogether. Playing a set comprised entirely of material from this year's The Album Paranoia, they're like a collision between Spacemen 3's fuzzy psychedelia and Galaxie 500's eerie folk rock.

Aside from being treated as royalty by several random acquaintances over the weekend purely on the basis of our accents, Dutch audiences and Best Kept Secret in particular has to be one of the most charming, inclusive, and generally good natured of any we've encountered. So when yours truly clumsily knocks a fellow reveller's pint of Tuborg out of his hand while dancing to Beach House's incredibly dreamy set, the guy in question offers to buy me a beer instead for apologising. Which I obviously refuse. Now that would never happen at Reading, Leeds, or V Festival.

although Wild Nothing's latest LP Life Of Pause may have received mixed reviews across the board, Jack Tatum and co's live show is no less entrancing than it ever was. So although the set is heavy with material from said record, it works concisely alongside older songs like 'Summer Holiday' and 'Only Heather'.

Likewise with Band Of Horses, whose recently released fifth album Why Are You OK heralded a return to form of sorts, but pales significantly when compared with the flawless Everything All The Time and Cease To Begin. Nevertheless, their incendiary Sunday teatime slot on the main stage proves to be one of the weekend's finest, something that's none more apparent than when the closing triple whammy of 'Is There A Ghost?', 'The Funeral', and 'The General Specific' create near pandemonium with the enthusiastic crowd out front.

The Dutch like their mayonnaise. So much that every single food vendor on site - including one ice cream seller - places it in a prominent position on the front counter. Whether it be chips, burgers, pasta, chilli con carne, vegetable curry, pizza, or fish, it just doesn't taste the same without a generous helping of the white gooey stuff. Or so I'm told.

When DiS spoke to Friendly Fire's Roel Coppen - one of the main bookers for Best Kept Secret - in January about this year's event, he told us of his plans for introducing a secret stage. That came to fruition in the shape of The Secret Garden, a tiny area hidden away between the rear left hand corner of the second stage and the exit to the festival campsite. Holding no more than a couple of hundred people at a squeeze, it played host to a number of low key shows from several of the festival's performers including one from Philadelphia surf punks Beach Slang, which proved particularly enthralling.

Anyone present at 2011's Primavera Sound will remember only too well the chaos caused by their then-experiment to operate a cashless system across the set. When the system crashed on the first day, none of the vendors or bars could operate, meaning revellers had to spend the first day buying expensive cans from dodgy street sellers or sneaking their own booze onsite (tut tut). Well, from its very first edition, Best Kept Secret has operated a similar system which apart from a few teething problems in its early days, has ran like a dream. This year - the festival's fourth - was no exception, with queues at a minimum everywhere across the site and no one scrapping around their pockets for bits of loose change at any time. UK festival organisers please take note.

12. Jeff Tweedy is one hell of a showman

Making a rare European live appearance for the first time in years, Wilco turned back the clock in style with one of Best Kept Secret's most memorable performances. Playing an impressive twenty-one song set including 'Box Full Of Letters' off 1995's debut A.M. and 'Kamera' and 'Heavy Metal Drummer' from 2001's breakthrough album Yankee Hotel Foxtrot, their Sunday evening slot on the second stage generates scenes of hero devotion usually reserved for Manic Street Preachers gigs. Not least due to the showmanship of frontman Jeff Tweedy, whose larger than life presence makes it impossible to ignore him for a split second. Which is a good job, given that he's enjoying the experience as much as we are, and is in no mood to leave the stage even a good quarter of an hour after their allotted time is up.