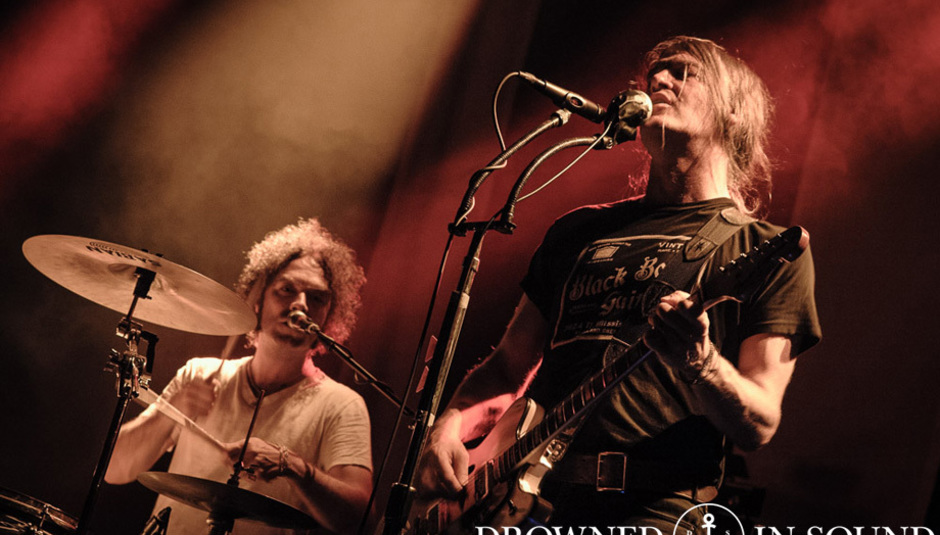 Dandys Rule OK? The Warhols do the do, and then some...

Dandys Rule OK? The Warhols do the do, and then some...

Skip through The Dandy Warhols twenty-two year career history and it contains its fair share of highs and lows. If shoegaze heavy debut Dandys Rule OK brought them to the attention of the majors. Stateside at least. Proposed follow-up The Black Album was a non-starter that could have spelled the end of many a lesser band's career. Nevertheless, unperturbed and no doubt enlightened by the whole experience, The Dandys regrouped and in the ensuing five years unleashed the two records that would undoubtedly define them worldwide. 1997's Come Down and its successor Thirteen Tales From Urban Bohemia released three years later catapulted the band into previously unchartered mainstream territories. Nevertheless, rather than play it safe and put out Thirteen Tales part two the band changed direction with 2003's synthesizer heavy Welcome To The Monkey House and while electronic music was in vogue around that time, it didn't sit as well with their fanbase. The ensuing thirteen years has seen them release six more albums including the aforementioned aborted second record to varying levels of critical and commercial acclaim. The most recent of those, Distortland, saw a return to the style and sound of their early records in its drone heavy focus and while not quite matching the highlights of yesteryear, it promised to make their first UK tour in two years something of an enticing prospect.

Of course there is also an argument that 'Dig!', the much loved by punters but loathed by its participants documentary of The Dandy Warhols and The Brian Jonestown Massacre has played a part in each band's varying trajectories. While The Brian Jonestown Massacre have enjoyed a surge in popularity since the film's release, it would be fair to say for a while The Dandy Warhols popularity flatlined. Whether that's down to the perception generated by each band's major protagonist in the flick is open to debate, but there's certainly a school of thought that The Dandys didn't come out of it smelling of roses. Whatever the reason, it seems to have been forgotten this evening, as Nottingham's Rescue Rooms finds itself packed to the rafters long before Courtney Taylor-Taylor and co. take to the stage.

Beforehand, London based three-piece Happyness are burdened with the unenviable task of entertaining those who've arrived early. In some ways they're a strange choice as support. Musically and aesthetically there's very little commonality between them and the headliners, and despite their very best efforts at trying to enforce their presence, it falls flat somewhat. Which is not to say they have no competence or redeeming features. On another day their Teenage Fanclub meets Travis would go down a storm, but here it's more a case of right place, wrong time.

With an immeasurably huge back catalogue to choose from, it speaks volumes that The Dandy Warhols open with an eight-and-a-half minute version of 'Be-In', the song that introduces aforementioned second album Come Down. Heavily indebted to the likes of Spacemen 3 and The Bends era Radiohead, it's a timely reminder of why they became so highly regarded in the mid to late nineties. So it's quite apt that 'Catcher In The Rye' and 'STYGGO' off their most recent long player fit perfectly when aired straight after. Fluid and translucent in both execution and delivery, it's to their credit that both could have sat firmly on any number of Dandy Warhols albums from the earliest to the present date.

'Plan A' and 'You Were The Last High' off Welcome To The Monkey House sound revitalised this evening. Beefed up to the max with distorted guitars replacing the keyboard sounds which accentuated them on record. 'And Then I Dreamt Of Yes' from 2008's often overlooked Earth To The Dandy Warhols also resonates intently in this setting while 'Holding Me Up' off its predecessor Odditorium Or The Warlords Of Mars might possibly be their finest composition this century.

A welcome outing for 'Good Morning', rarely aired is recent years leads into a toilet break as keyboard player Zia McCabe, guitarist Peter Holmstrom and drummer Brent DeBoer leave the stage, leaving Taylor-Taylor all on his own. Ever the true professional, the erstwhile frontman soldiers on playing three songs including 'Welcome To The Monkey House' and an audience assisted rendition of 'Every Day Should Be A Holiday' that only adds to the feverish levels of excitement out front. 'All The Girls In London' and 'All The Money Or The Simple Life Honey' follow, showing The Dandy Warhols panache for penning dancefloor friendly pop songs in the process.

Wheeling out the big guns in the final quarter, 'Not If You Were The Last Junkie On Earth', 'We Used To Be Friends' and 'Bohemian Like You' unsurprisingly receive the warmest applause. While 'Godless' and an elongated 'Boys Better' thanks to the opulent drone of 'Pete International Airport' that precedes it bring the curtain down on a near two hours long set that's not so much a return to form, but more a fastidious nudge that The Dandy Warhols never lost their mojo in the first place.

Dandys Rule OK? Tonight they do, and it would be a brave man to try and steal their crown on this evidence.