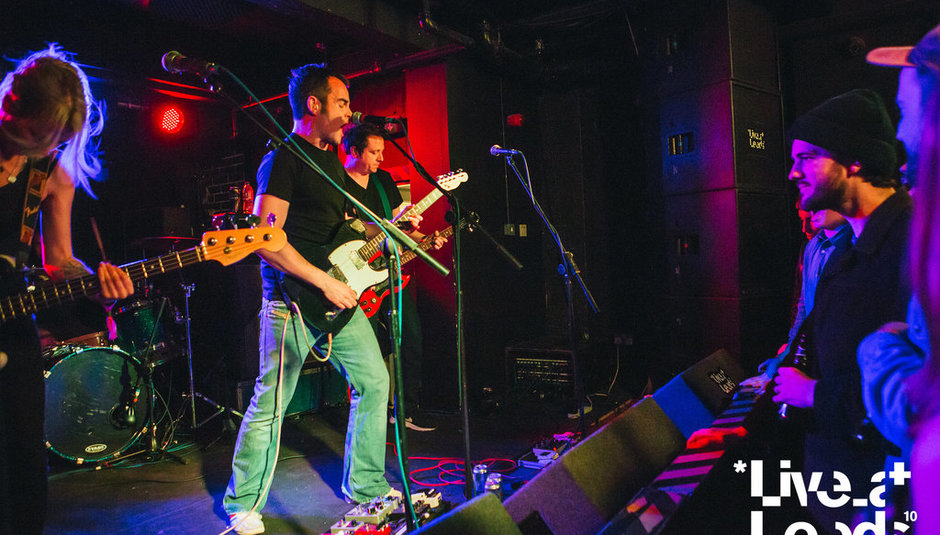 'Have you seen any good bands yet?' asks the singer from Kleine Schweine, 'No, I didn't think so.' The man's got a point. While Live At Leeds line ups of the recent past have included such idiosyncratic gems as filthy squat-rockers Fat White Family, Belgian noise-thumpers Raketkanon and a rejuvenated Thurston Moore, this year's bill feels almost entirely dominated by comparatively unremarkable indie-pop. This being a pervasive citywide event, it's possible that I spent much of the day in the wrong place at the wrong time but the indie-pop I happen to stumble across comes in a variety of flavours, most of them watery. There are indie-pop solo singer-songwriters, indie -pop outfits with a disco twist, indie-pop groups with a Kerrang!-baiting blues-rock stomp, indie-pop bands with Eighties shoegaze guitars. Indie-pop this. Indie-pop that. Indie-pop. Indie-pop. Indie-pop. Most of the indie-poppers' press biogs seem to boast enthusiastic support from Huw Stephens, so maybe it's all his fault. The Millennials' very own Steve Lamacq.

Maybe you shouldn't expect too much of an event headlined by Jess Glynne, who then pulls out. Officially, it's only a 'nasty chest infection' but the singer from Kleine Schweine announces from the Leeds Beckett University stage that Glynne has cancelled because she's dead. 'It's not funny,' he adds, dedicating the next song to her memory. The song in question happens to be about the English Defence League. A later number is called 'ISIS ISIS Baby' and is about 'the biggest threat to modern society... except maybe Jess Glynne, Ellie Goulding, Ed Sheeran and all those pricks.' Now it may not be big or clever to slander Glynne as a deceased, civilisation-menacing racist but that level of stage patter sure beats the hell out of the indie-poppers' 'thanks guys, this is another love song, it's in D.'

In case you haven't guessed, Kleine Schweine are a punk band. Not a pop-punk band or a ska-punk band or an emo-punk band. The self-proclaimed 'best band in Leeds' are a good, old-fashioned, shouty, sweary, beer-swigging, political punk band. They seem as surprised as anyone else that they're playing a big stage at this festival. They're not going to waste the opportunity though. They sell t-shirts (by hand, not at the official merch stand, that's not allowed) printed with the image of Donald Trump's decapitated head. They have songs called 'Back In The DDR' and 'Daily Express Yourself'. Another composition is 'about Jimmy Savile, paedophiles, David Cameron, Margaret Thatcher and all that shit.' You don't get that with indie-pop. Well not anymore. It's worth noting that Kleine Schweine's guitarist is wearing a Smiths t-shirt (The Queen Is Dead), even if his frantic guitar strumming is more Minor Threat than Johnny Marr. The point is that, like e.g. Sleaford Mods, Kleine Schweine look older than most newish bands, with their thinning hair and swelling guts. They are angry and disillusioned and despairingly amused, unlike the indie-poppers who seem to think everything is going to be fine and dandy as long as your guitarist carries a spring in his step and an Edge-like effect. (I realise there are young 'uns playing politicised punk music too but they're not at this festival and besides I often find their anger doesn't transmit too convincingly through the barrier of their expensive leather jackets, fresh-faced skin and hair-product-heavy Mohicans.) In humble jeans and hoodies, Kleine Schweine are old enough to recognise what's going wrong and what's being lost and are reacting to it in the only way they know how: playing loud, angry, irreverent punk music. Radical adults lick godhead style, as Thurston Moore once sang.

So thank heavens for Kleine Schweine. And thank heavens for Future Of The Left. Another cantankerous semi-veteran, this one with five FOTL studio albums under his belt along with the three prior Mclusky albums, two as the 'one-man band' Christian Fitness ('NOT a solo artist') and who knows how many EPs, Andrew 'Falco\ Falkous is veritable British Institution, if a somewhat cultish one. Falco's signature caustic stage rants are at a minimum this evening because 'we want to get in as many songs as possible', although he does wonder aloud if any of us actually know where we are because 'no one's shouted "Leeds" or "Yorkshire" yet.' That absence is somewhat unusual in this neck of the woods and it's a testament to the respect that Future Of The Left command over their doting audience. With a sneer on his face and a glint in his eye, Falco leads his three fellow troops through an hour-long set of pounding noise-rock semi-anthems complete with the lyrical reprimanding of record companies, racist neighbours, Billy Corgan, Sky News, lapsed Catholics and army surplus motherfuckers. The band's sound couldn't be bettered it's so thumpingly meaty yet crisp and unfoggy and, although their latest album is dominated by asphyxiating all-out riffery, the setlist still treats us to older numbers such as 'Manchasm' based around Falco's murkily jaunty synthesiser refrain. Speaking of treats, FOTL end the gig with a rousing rendition of the frenzied Mclusky classic 'Lightsabre Cocksucking Blues' which dissolves into a triumphant skronk jam when Falco dismantles Jack Egglestone's drumkit and Julia Ruzicka clambers into the audience, bass in hand, feedback wailing.

Seen any good bands yet? We have now.

Future of the Left image by Ed Whitmarsh