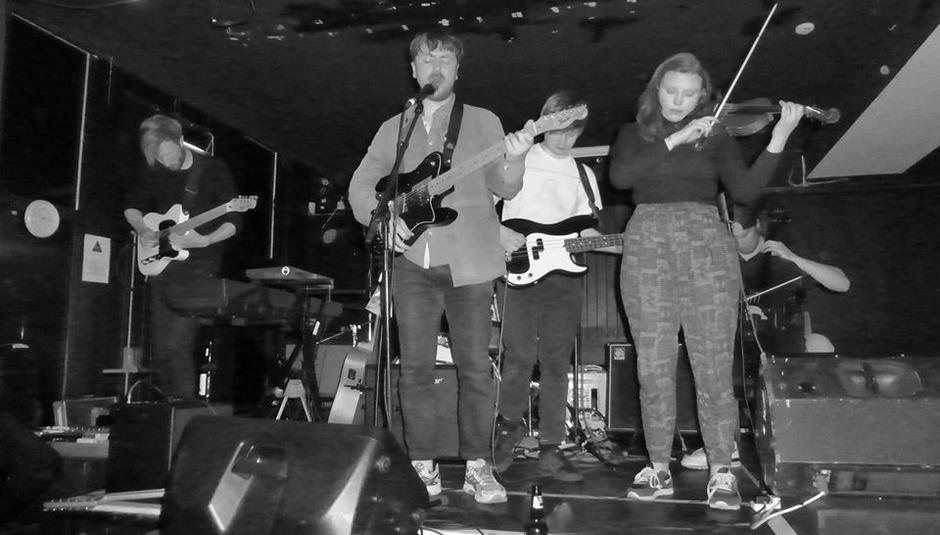 When Jamie Lee sings the aforementioned words two thirds of the way through 'I'll Be The Night' there's tears welling up in people's eyes all around the room. It's a resoundingly emotional yet simultaneously uplifting moment. And one that demonstrates beyond all reasonable doubt just what an important band Money are. Particularly in a climate where art is treated as a commodity. So for such an impassioned display as the one Lee and his assorted bandmates put on this evening there's clearly an underlying sense of integrity at work.

It's taken two-and-a-half years between the release of 2013's debut The Shadow Of Heaven and January's long awaited follow-up Suicide Songs. But a lot has happened in that time. And the majority of those events formed the basis for Lee's stories on the second record. You want your pop stars to be real? Look no further. Although whether Lee would take kindly at being referred to as a "pop star" is another matter.

Nevertheless, in a parallel universe where justice prevailed this band would be massive by now. Not necessarily arena sized massive but certainly bigger than what they are. And much more deserving than playing to fifty punters in a Sheffield pub on a Wednesday night in April. It's a weird scenario as there's clearly an underlying sense of bewilderment at what more do they have to do. If releasing one of the year's finest - if not THE finest - albums isn't enough, then I guess the next best thing is to keep spreading that message via word of mouth.

Earlier, local acoustic based troubadour Daniel Whitehouse and Mancunian electronic duo Bernard And Edith face the unenviable task of playing to a sparse crowd more interested in checking their phones than watching live music. For the latter their task is made even more difficult by a multitude of technical issues that sees their set cut short to just four songs. Which is a crying shame as their captivating blend of performance art and music - think Kate Bush fronting The Knife - is a joy to watch.

By the time singer/songwriter Lee takes the stage, The Harley has filled up slightly. Opening with the as-yet unreleased 'Lonely London Lady', a song that sits somewhere between the gritty diatribe of The Pogues and elegiac grace of Tim Buckley or Nick Drake. He's a captivating presence and for the next forty-five minutes or so, one that enthralls the entire room.

As he's joined by the rest of the band, launching into 'You Look Like A Sad Painting On Both Sides Of The Sky' it's difficult to envisage what trials and tribulations inspired such an achingly beautiful composition. Only two songs in and Lee has the audience in the palm of his hands. The addition of a string section alongside long serving drummer Bill Byron and keyboard player cum guitarist Charlie Cocksedge (Bernard And Edith's Nick Delap plays bass) Keeping between songs banter to a minimum save for a brief snippet of Nirvana's 'All Apologies' ("Everyone is gay" he sings with a mischievous grin) while borrowing a hat from a girl at the front who doesn't seem to mind as it's swapped around various musicians heads before being kindly returned to its rightful owner.

If The Shadow Of Heaven was at times eerily reminiscent of early Verve. And both 'Bluebell Fields' and 'Letter To Yesterday' off that record are aired this evening as a timely reminder. Suicide Songs has a distinct air of Low or Galaxie 500 about it, particularly in the flesh. Indeed there's a nagging feeling that maybe Money would be a much bigger draw had they originated from the other side of the Atlantic. 'All My Life' and 'Hopeless World' pull at the heartstrings immeasurably, Lee by now having moved both himself and the mic stand onto the floor in front of the stage.

Closing with a poignant rendition of 'Cocaine Christmas And An Alcoholic's New Year', stopping at one point to apologise for being a little drunk. It's easy to see why Money have become a band most people can identify with. Penning anthems for the disaffected like there's no tomorrow. This is as emotionally intense as a live show gets. But then we wouldn't expect anything less from Money. A very special band. Cherish them with your heart, even though they're likely to break it at some point while destroying your liver along the way.

A truly exceptional performance that will live long in the memory.

"An album about love but not about a ...

In Photos: Wolfmother @ The Forum, Lo...