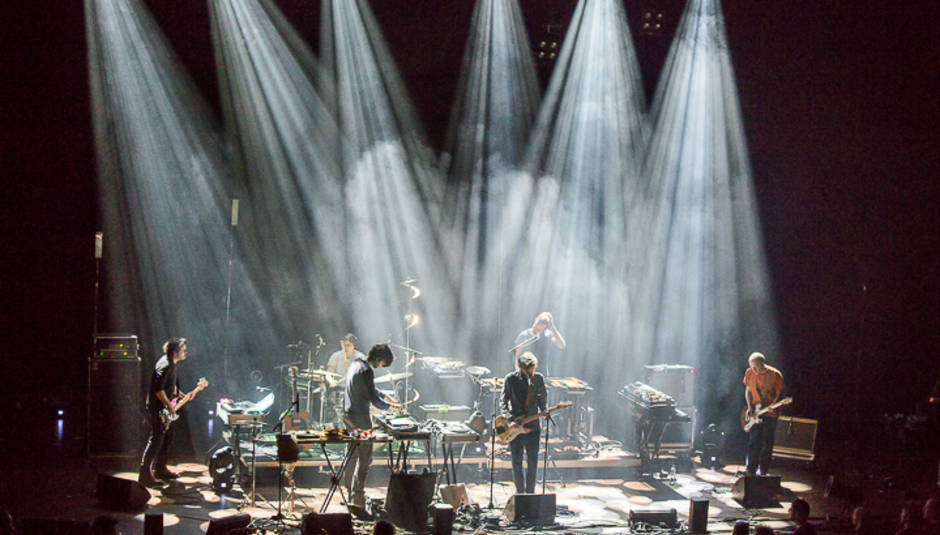 Have Music, Will Travel: DiS Does Cross-Linx

Have Music, Will Travel: DiS Does Cross-Linx

The concept of a travelling festival is a curious beast. On the one hand, it makes sense for event of a certain size; rather than hope fans make the effort to come to you, take the show direct to them. On the other, it can be a logistical nightmare trying to repeat the same shows, day after day, in vastly different settings and spaces. Cross-Linx, now in its 15th year, attempts to solve the latter problem by keeping things on the technical side as simple as possible and curating as interesting a line-up as possible. Calling in Rotterdam, Groningen, Amsterdam, and Eindhoven, previous years have seen the likes of The National, Eels, Zita Swoon, and Yann Tiersen perform with distinction, and this year was no less diverse; from a chart-topping singer-songwriter to avant-garde experimentalism via acclaimed indie and “hidden” shows, it’s no surprise to see youthful hipsters mingle with septuagenarian music lovers, all bustling about, drinks in hand.

First up is the guitar techno of The Notwist, the German indie darlings who turned to the dark side and discovered the power of pulsating rhythms and swirls of noise. As ever, they’re suitably loud and expansive, several tracks helped along by retina-searing blasts of strobe. Their set draws almost exclusively from 2010’s Neon Golden, and while the more poignant, melancholic moments still resonate – ‘One Step Inside Doesn’t Mean You Understand’ sounds particularly heartfelt – it’s when the really cut loose and open up the songs that you feel the power of their motoric groove and sense of scale.

Less renowned artists are equally well catered for by Cross-Linx, and in a somewhat unique way. At two points during the evening – at 9pm and again at midnight – people gather in the foyer to claim coloured “tickets” to see an intimate show in some far off, hidden space within the building. With the smallest space holding just 20 people, you have to be quick; guides wearing coloured hats then gather up the groups and lead them off into the depths of the Muziekgebouw. For the artists themselves, it’s a chance to impress an open-minded audience in a rare, up close and personal setting, and gain new fans. Dutch guitarist and harpist Art Strootman, British composer Luke Deane alongside guitarist Ragnar Olafsson, and violinist Diamanda Dramm are the biggest draws, and receive glowing recommendations from those lucky enough to have snagged a ticket.

Part of the wonder of Ryan Lott’s compositions as Son Lux involved trying to work out exactly how he’d transfer such intricate, complex music to the stage without losing any of the magic. Having recruited guitarist Rafiq Bhatia and drummer Ian Chang to help tour 2013’s Lanterns, they’ve since become permanent members, and the tightness from two long years on the road shows. Picking from both Lanterns and last year’s Bones, they are – collectively and individually – superb. Both Bhatia and Chang are given moments to shine with various extended solos, but it’s Lott who demands attention, deftly manipulating various machines and boxes as well as a keyboard. His voice, whether laden with effects or unaccompanied, is a haunting, brittle, breathy thing of beauty, which floats out above the music like a cloud. They save the joyous ‘Lost It To Trying’ to last, Lott bouncing up and down and across the stage while getting the audience to help out. Grinning manically, he looks content; these are the bands first shows in 2016, and on this form, are not to be missed.

The main draw for this year is a supergroup of sorts, Neil Finn & Glenn Kotche’s Unlimited Orchestra (Kotche being an acclaimed drummer, percussionist, and the man behind the kit for Wilco since 2000). It’s bold idea; combine the talents of many into one, star-studded show, and it works, up to a point. Delving into Finn’s Crowded House back catalogue results in faithful and well-received versions of the hits – of course we get ‘Four Seasons And One Day’ and ‘Don’t Dream It’s Over’, even if ‘Weather With You’ is conspicuous by its absence – but something doesn’t quite click. Perhaps it’s Finn himself; far from being triumphant or basking in the goodwill, he carries the slightly weary air of man growing increasingly tired of lugging twenty-year-old songs around the world, stuck in a musical Groundhog Day. It’s polished and neat without inspiring, and comes off as a little forced.

The 17-song set is saved by a revolving cast of cameos; Andrew Bird joins the orchestra for three of his own songs, while Son Lux appear for ‘You Don’t Know Me’ and a quite brilliant version of ‘Easy’, the extra power provided by real horns and strings raising the song to the sublime. Most curious of all is their last encore, a tribute to David Bowie in the form of 'Space Oddity'. With Lott singing as Major Tom and Finn as Mission Control, it veers between the brilliant and bizarre; obviously, everyone sings along, and no-one seems to care that a few bum notes are careless scattered throughout, but it doesn’t quite soar. Still, Bowie is hard to pull off, and with limited rehearsal time, they should be applauded for replicating the spirit if not quite Bowie’s casual assuredness.

As a swansong, we’re left with an awkward choice; Andrew Bird’s solo set, or the much-discussed Dawn Of Midi, an instrumental trio from Brooklyn. I plump for the latter, and I’m not disappointed. Combining drums, upright bass, and a piano, they concoct something akin to minimal acoustic dance music, albeit of a type that can head out towards trance or focus instead on drones. They play non-stop for 45 minutes, a continuous, semi-improvised sweep where each “track” or movement blends into the next. On a technical level it’s breathtakingly good; emotionally, the music curls slowly into your brain and starts to warp your sense of time and space. It grows, and swoops, and mutates into many different shapes, and while you can pick out elements of free jazz, classical minimalism, and even some African rhythms, it’s blended into a dizzying whole that’s unlike anything you’re likely to have encountered before. In short, it’s the type of brilliance which gives festivals like Cross-Linx their raison d’être, and proves that an open mind in approaching these events can reap rich listening rewards.

More details about Cross-Linx can be found here

In Photos: Primal Scream @ The Pallad...