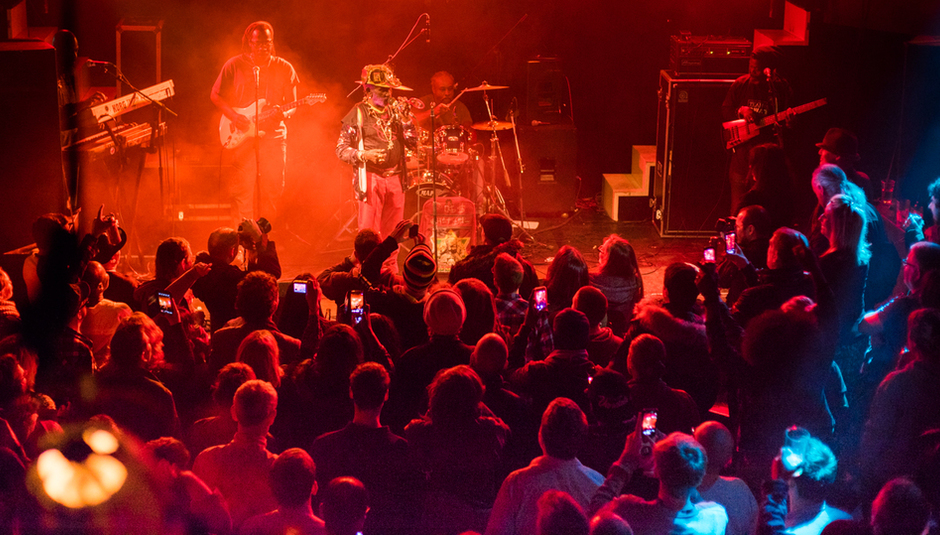 It’s been a hard slog for Liverpool since winning its place as European Capital of Culture in 2008. The course of the city’s music and arts scene never seems to runs smoothly, but thanks to the hard work and dedication of an incredibly talented and tight-knit community of promoters, artists, musicians and creatives, 2016 sees the city in fine fettle and standing toe to toe with the best arts and culture hubs that the UK has to offer, despite the best efforts of the current government to dismantle it. Currently boasting a bustling and vibrant local music scene that’s given birth to the likes of success stories Clean Cut Kid, Circa Waves, All We Are, Stealing Sheep, Outfit, SG Lewis, Bill Ryder-Jones, Ady Suleiman, CONAN and Natalie McCool, Liverpool’s new crop of hopefuls are beginning to make big strides internationally. In the first column of a new series, we’ll be attempting to throw a brighter light on the happenings in a small city with a big heart and increasingly big ambitions.

It might be a few months since we said goodbye, but it would be impossible to open this column without mentioning the closure of local institution The Kazimier (pictured, above) on New Year’s Eve – if further proof was needed of what a huge hole its closure leaves in the cultural calendar, here’s a reminder of what went on:

Posted by The Kazimier on Tuesday, 23 February 2016

One of the city’s most beloved music venues and art spaces, it recently became the latest victim of the rampant redevelopment affecting the local music scene that we hope the new “agent of change” legislation will go some way to curbing. Whilst we’re heartbroken that we’ll never see another gig to rival the fabled 2011 Chali 2na show on that hallowed dance floor, there’s plenty more to come from the team behind the venue, including new venture The Invisible Wind Factory, whose inaugural spectacle ‘Omphalos’ takes place on 19th May onwards, with very limited tickets on sale now.

Liverpool’s own firebrand music publication Get Into This hold the yearly GiT Awards at Baltic Triangle venue Constellations on 14th May 2016 celebrating the best in underground talent from the region. This year’s nominees are a healthy representation of the burgeoning local music scene with The Vryll Society, Clean Cut Kid, Trudy, TVAM, Hooton Tennis Club, RongoRongo, MiC LOWRY, Dragged Into Sunlight, Stealing Sheep, Bill Ryder-Jones, Mugstar and L U M E N providing a stunning cross-section of the talent on offer.

The big kahuna for spring - music industry conference and festival Liverpool Sound City – have revealed their line up for 2016, which takes place once more at Bramley-Moore Docks on May 28-29. For more information head over to the official festival website, but highlights include Catfish and The Bottlemen, The Coral, Sleaford Mods, Dandy Warhols, Palma Violets, The Anchoress, Georgia, Dilly Dally, Shura, Neon Waltz, Inheaven and Holy Esque.

On the Friday of the festival you can also see DiS' Editor in conversation at the SoundCity+ conference:

Fast-rising local success story Natalie McCool has revealed a number of intimate gigs throughout April and May in her own fans' houses in support of new single 'Fortress', including several Liverpool dates – more info here. Commenting on the idea, she said: "I really wanted to be able to see everyone in the audience and be literally at arm’s length from people who connect through music, to be able to fully engage and have them involved as part of the whole set. The phrase "let's build a fortress" being everyone in the room altogether, not just watching the show but being a part of the whole process, a real community feeling."

They of now-legendary local clubnight 10 Bands 10 Minutes fame, Married To The Sea, celebrate the release of their new EP ‘Cold War Love’ on 9th April at Maguire’s Pizza Bar. We’re reliably informed that it’s only “4 snots on the door” with the tear-stained-wonder-pop 4 piece joined by bevy of local heroes Down & Outs, Rich Lomax and Fort Baxter. Stick that in your pipe and smoke it, sailor.

Taking a trip away from the local band scene, Triple Bam and Team Madnice get together for another Liverpool hip hop sure shot on 14th April featuring three icons of East Coast hip hop, all three longstanding members of Guru and DJ Premier’s extended crew Gang Starr Foundation. Tickets are on sale now.

Staying down in the Baltic Triangle area, Sargent House stalwarts Russian Circles make their Liverpool debut on 29th April also at Constellations. It's been almost 10 years since the Chicago three piece sounded their arrival with an almighty roar on debut album 'Enter', since becoming pioneers in the exploratory sound of heavy instrumental music. Support comes from the heavy, bluesy doom of Seattle’s SAMOTHRACE and local favourites The Bendal Interlude, recently returned from touring their debut album 'Reign Of The Unblinking Eye'. Bring the Buckfast, this one’s going to be horrid.

Long a cornerstone of the local scene and markers of good taste, EVOL, hold their annual showcase of all the best in new music, FestEvol, on 1st May this year at Camp and Furnace. A huge 50 artists are announced for this year’s 5th edition including Juliette Lewis and the Licks, Steve Mason, Blossoms, Hooton Tennis Club, Marnie, The Vryll Society, Black Honey, By The Sea, Beach Skulls, pink kink, Strange Collective, and more. Find your favourite new band and lose your wallet, keys and innocence – what’s not to like?

Former members of Stereo Virgins are hosting PIZZA PARTY 2 on the Friday 20th May at Maguire’s Pizza Bar, the second outing of their charity gig in honour of sadly missed brother, bandmate, gig pal and beloved local musician Lyam Kirkham. 2015’s outing was bloody ace and they raised a sweet chunk of cash for a worthy cause that's very close to many hearts, the ‪#‎thebraintumourcharity‬ and ‪#‎thelyamkirkhamfund, with appearances this year from X-Ray Cat Trio, Zealous Doxy, SPQR, Fat Camp and Long Body.

If you’re looking for a clubnight off the beaten track, Abandon Silence continue to champion the best in underground electronic music on 3rd June as they bid Farewell to Beginnings for the time being, with some very special guests joining them under the lights. A limited run of tickets are on sale at just £5 before they announce the line-up; there are only 100 of these available via Skiddle. On the same weekend they’ll also be hosting a special Day & Night Courtyard party in association with Dimensions Festival in the Baltic Triangle, with details for the party coming soon.

Local stalwarts Good Grief might not be that great at tooting their own horn considering they’ve pretty much only ever played at shows they’ve put on themselves, but what they do exceptionally well is the sort of DIY indie punk that fuels basement venues up and down the country with a refreshingly honest heart-on-sleeve love for their craft. Their latest 7” effort, a split with Chattanooga's Future Virgins, is out now as part of All In Vinyl's latest series of releases, illustrating simplicity at its best with their piquant and carefully sculpted snippets of trashy pop.

HAARM – Foxglove (Self Release, Out Now)

Currently holed up in their HQ at Whitewood Recording Studio writing and recording new material and working on a special live show, this collective of newcomers became immediate music industry hot property almost overnight when they unveiled the cinematic, lush, lo-fi pop of their driving debut single earlier this year. With a round of enthusiastic early support from radio and a plethora of Hype Machine bloggers, the band have now collaborated on a new video for ‘Foxglove’ with artist and photographer Peter Michael, using footage from Peter Greenaway's highly acclaimed 1985 film "A Zed & Two Noughts".

Leaning towards the heavier end of the spectrum, FOES are one of Liverpool’s bigger rock success stories of late, recently inking a deal with independent purveyors of primo technical rock and metal Basick Records. New single ‘Beautiful Fiction’ is the perfect introduction to their clinical but still chaotic approach to angular alternative rock that recalls the progressive post-rock of the likes of Oceansize and Russian Circles. Meaty of riff, lengthy of beard and deep of thought, they’re the kind of band that could go the distance if given the chance.

Rising from the smoking embers of several leading Merseyside acts, newcomers Pure Joy have now readied their debut LP for public consumption. With a sideline in hot, psychedelia-heavy filthy garage-rock tinged with patches of late-60s American psych, there are hints of the vivid expansiveness of Kurt Vile and the blissful, permeating warmth of Tame Impala at their finest. Any way you look at it, it’s a trippy journey through a neo-psych wonderland. Listen to the sun-blasted, driving pulse of latest single ‘Katie’s Gone Home’ here:

THE NIGHT CAFÉ – Together (Self Release, 11th April)

Causing an undeniable stir online, Liverpool teens The Night Café might not have much under their belts in the way of live shows, but their Soundcloud play count is through the roof – one spin of new track ‘Together’ and it’s easy to see why, as their 2016 take on the Mersey sound pioneered by The La’s gets a makeover by way of Bombay Bicycle Club and Menace Beach on this dreamy, shimmering slice of indie that sounds custom made for a sun-kissed summer in the city. We’re expecting big things to come from this lot if they can successfully convert their rabid virtual fanbase into ticket-buying fans.

If you like ‘em heavy you could do a lot worse than this raw and ready EP from new outfit Sheer Attack, featuring members of Cold Ones, SSS, Mind Mountain and Salem Rages. 80’s hardcore and thrash influences crash headlong into a vocal reminiscent of Dead Kennedy’s Jello Biafra and a full-throttle rock and roll tilt that tips a hat to the late, great Lemmy Kilminster. As is their way, we’re not sure exactly when this is out other than a vague “late April”, but you can stick it in your ears right now via the magic of the internet:

Whilst we might not have the time or the space to cover everything that’s coming out of the city in as much detail as we’d like to, we simply couldn’t let this bumper crop of new releases from Liverpool artists go unnoticed – check out Drowned In Liverpool Vol. 001 on Soundcloud for a playlist of the best new tracks from our brimming mailbag that we couldn’t find more space for. Tracks come from Married To The Sea, Nick Ellis, Whitecliff, Vynce, Natalie McCool, Black Pulp, Buddha, TUBZ, Abe, Peaness, Viola Beach, Veyu, Mugstar, Xam Volo and Law Of The Land:

More coming in June... Email me at drownedinliverpool@gmail.com

"In London everybody's wearing a mask...

Have Music, Will Travel: DiS Does Cro...