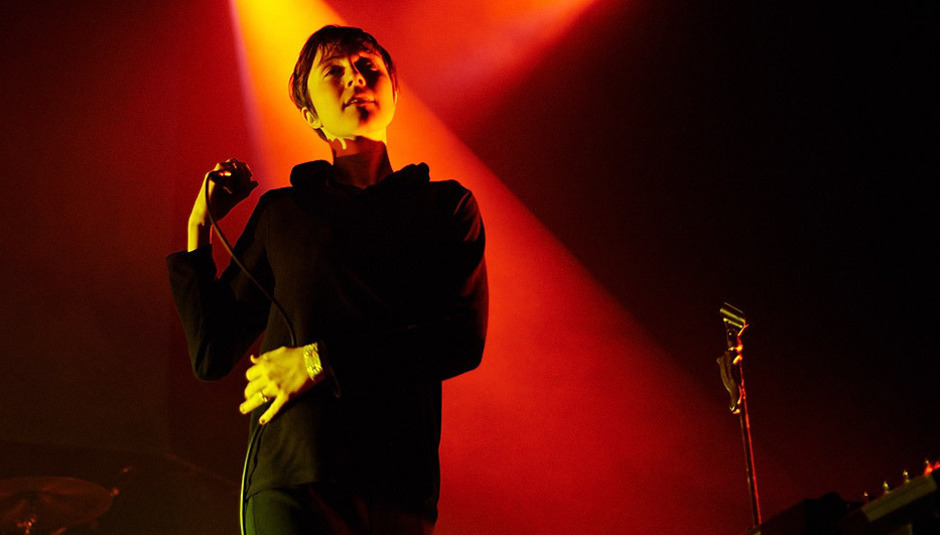 Poliça are back three years after the release of their second album, Shulamaith with an intoxicating new album United Crushers. They’ve kept to the brilliant core of Ryan Olson’s MPC beats and Channy Leaneagh’s uniquely reimagined contemporary R&B vocals that posit them as one of the most innovative bands of the past five years.

Somehow they’ve managed to build on the quality of their existing albums and produce their most definitive work. The most exciting developments on the new album are how Olson’s production has become much more inventive and hook-laden. Whilst Leaneagh’s vocals are more natural sounding in parts making her autobiographical lyrics a little more exposed, and harder hitting for it.

The fascinating lyrical journey of United Crushers explores Leaneagh’s personal world yet never loses sight of how much of the societal struggles and how they impact on her daily life. In her chat with DiS, Leaneagh explains how the pregnancy of her second child (that she gave birth to in October), parenthood, love, loss, politics, and drug use inform the album in a revealing interview that will bring this album vividly into life. Read the track by track below.

This track looks at what world we're bringing children into. It asks what are they going to do when they grow up and realise it’s all shit […] That although so many people want to make social change politics is all a game and it’s very rigged. The song tries to find some light amongst all that bullshit and find a way to make it all better.

DiS: Where do you see political change happening?
I feel like there are some organisations that are making a real change like Black Live Matter - at least in my town of Minneapolis they've done some actual changes. I really hope Bernie Sanders gets elected. If not, I think people like him and Elizabeth Warren will continue to fight for political change. Then, hopefully, there will be more reform in the US justice department as far as cops are concerned.

It's more upbeat. As all the songs are that I've ever written are, it's heavily autobiographical. Lyrically, it is a capsule of my life and my observances during that time. ‘Lime Habit’ is probably the most diary entry song on the record along with maybe ‘Fish’. Both are about my feelings of myself. Actually, there’s a good one line in there that represents it well: “Never in the corner, luck of life/ See/ Up/ Higher, never in style ”. It’s about how I’m not doing what's quite in style, never quite hitting the mark.

It’s about pregnancy. Even though I'm really happy to be pregnant, I'm mourning the loss of freedom. You can't go out anymore and even in small things like wanting to feel high in some way are restricted and you feel really straight-edged. You have to lose part of yourself for a while to put it into this other person at least when the child is young.

It speaks about this street scene where you have to raise kids to be really tough. It’s like they're already fifteen when they're four because it seems that the world is so rough. You have to teach them how to think about their surrounding and look for danger. It's talking about a trigger happy world.

DiS: So people are getting shot for no reason?

Mostly black people and black men are targeted. They’re pulled over for very petty offences. As a white woman, I don't really have to say anything because it doesn't actually affect me personally very often. But I think it’s important not to turn a blind eye. The violence is just constant! Very little kids are shot even. One example is the twelve-year-old boy Tamir Rice who got shot by the police for playing with a toy gun. The police are way too amped. It's sort of like we're occupied people, or an occupied country where we have the police are escalating violence and they’re not peace makers.

Yeah they hardly ever get prosecuted. It's just now that a couple of cases have come up in New York and in California where the police have got prosecuted. I'm not a complete anti-cop, I understand it's a difficult job but law enforcement has to be a way to de-escalate violence. Take Sweden for example, there is a YouTube video going around in America at the moment where there's a Swedish policeman who came over for vacation in NY dealing with a man freaking out on the subway. It showed him de-escalating the situation in a peaceful way whereas an American cop probably would have just tazed him.

It’s about the vanity of fame and there’s this imagery of a woman tightening a corset tighter, tighter and tighter. I think it's speaking to myself as a writer. But, in general, I long for it to be changed. I’d like to see women’s fashion in pop re-imagined away from the constant leotard and tights that's been the popstar uniform for ages. I’m concerned not only with physical appearances but with the structures that create those norms.

But this is a multi-layered song and like ‘Wedding’ it talks about having to raise kids to be tough. It's talking about every man being a sheep in wolf trying. There are tons of gangs, lots of shooting but you see these men and I can tell they're good people but they have to put on a layer of toughness and hardness because it's dangerous.

This song is based around a love that's not mutual.I sing, “I want my hand to be held / you feel it / he don’t feel me”. That song is built around the beat and the bassline of the track.

DiS: Is it about any specific relationship?

It was a fight that I had with the guy who is now my husband […] I get to write about all kinds of shit and get through it. In that song, I speak to my love about our relationship. It’s much easier to write about it and sing about than do anything about it face to face. I seem to be better at communicating thorough lyrics.

It's one of my favourite songs to sing live. It's very different to the other songs on the records. It’s about finding the way you work with someone. The line: “Better to only touch when we need to touch” is about how we let each other have space. That's when you can love better.

For the first album Poliça used entirely beats that Ryan had written for rappers that didn’t get used. That developed into him writing beats for Poliça and Shulamaith he wrote specifically for Poliça and this album he wrote for Poliça apart from this song. This was a beat from an old rap song that Ryan had sitting around. It's a pity me song as the lyrics, “I wonder about my friends why don’t they call ” suggest. It's a diary entry as well.

This has a dark emptiness. The chorus is: “The time you don’t even know what your name is”

It’s about feeling out of your mind when you don’t know where you are. It’s like you've lost yourself. I think the song seems very far from where I am in my life now. But it's a drug song kind of where you're out of your mind and you can't remember who you are. It starts really good then goes really sour.

DiS: Which drug are you talking about specifically?

MDMA. It's like a wonderful happy night but the next day you come down. Sometimes, the day after I want to cry. I love MDMA, I love the feeling, it's pure joy. But it's this feeling of being separated from someone you felt very close with. As a lot of these songs are, it's my reaction to the beats that Ryan’s written. This is a very specific example of me having a conversation with him, it's one sided but I'm responding to the beat.

It's super happy sounding. We were with a bad manager on the last record and it's celebrating the release of that into a better situation.

Another love song where the situation got sour. Like when you're in a fight with someone. You remember that you were each other’s but now it feels like a different world.

An after fight song. I sing “I cannot fuck you enough”. It's also about someone who wants to push you away and watch you crash. It’s like their self-destructiveness is wearing off on you and realising that it might be pretty destructive.

United Crushers is out now. For tour dates and more info visit thisispolica.com._