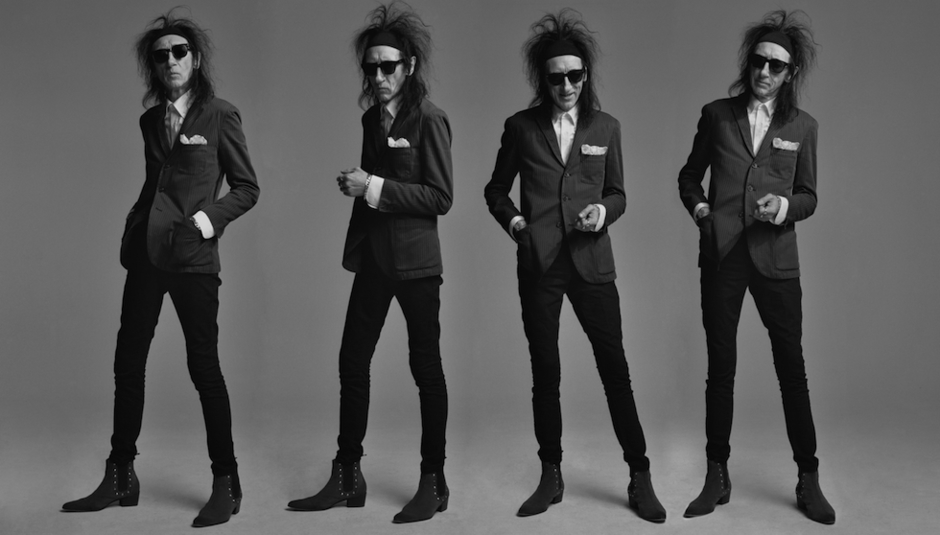 Dr. John Cooper Clarke, the poet for people who don’t like poetry, the punk for people that didn’t like punk, the greatest opening act on the circuit, the single best bit of the GCSE curriculum and the skinniest, best dressed man never to bear the surname “Ramone,” has released one book in 34 years. One. Ten Years In An Open Necked Shirt, published in 1981. “I've got loads of new stuff though. No doubt about it.” he says “It's my own lethargy that has led to this situation. It's not that disastrous. It's deferred gratification by default.”

He’s right- it’s not disastrous, because Johnny Clarke’s writing has never really lived on paper anyway. His distinctive voice (and silhouette) is instantly recognisable, and his poetry has entered into the lexicon of British culture aloud, not nailed to the page. It’s impossible to read his work without attempting his Salford accent and rapid fire delivery. His personality is stamped into every sentence. It’s about sound as much as it’s about language. Which is why across a four-decade career path that you’d generously describe as “meandering”, whether a singer, a school staple or a smack addict, John has never stopped gigging. “The gigs are everything” he says, “All poetry is best heard rather than read, I believe, and mine's no exception.” Far from an exception, in the case for speaking poetry aloud, John Cooper Clarke is arguably Exhibit A. His is definitively an oral history.

This month sees the release of Anthologia, a multi-disc set collecting the gems of his musical recordings, and a ton of spoken-word. It speaks volumes that his work is still being released and celebrated as audio, and that live performance -the set features full gigs- should take pride of place: these poems have lived on stage since the early 70s.

“The first time was at a place called Jerry Harris's Piccadilly Club,” he says. “There were loads of these places in Manchester, they were kind of cabaret joints, that had singers, tables. People past their prime would be on at those sort of places. Johnny Ray, for instance, people who'd been chart toppers not so long ago would eek out a comfortable living doing these cabaret clubs.” he lists them, “Jerry Harris's Piccadilly Club, Foo Foo's Palace, you could even count Bernard Manning's Embassy Club as one. There was a whole heap of these places over Manchester in the 60s and 70s. I was trying to make it in that world.” It was a baptism of fire. Cooper Clarke stuck out like a sore thumb, with short hair and tight suits in a world where “even your uncle Stanley had hair down to his elbows, and his flairs.” Amid the battle hardened club comics and cabaret singers he was a weirdo doing poetry. “They did have sort of respectable artists on, but I wasn't one of them” he says, “I would do a little bit of a set, a couple of gags and some area-specific, parochial style poetry about a part of Manchester that everybody knew about.” He struck a style that could cut through the toughest crowds he’d ever play to, “That's where I wrote 'Salome Maloney' about a local dancehall girl, one of my first ones that I ever recited. About an archetypal stock character that everybody in Jerry Harris's Piccadilly Club would recognise.”

When Punk arrived in the North, whether carried over the sea by the Ramones, or dragged up from London by the Sex Pistols, it found John Cooper Clarke, with his drainpipes, cropped hair and motormouth delivery had beaten everyone else to it. “I started off in an adversarial position there,” he says “so punk rock was the easy option for me.”

On the advice of the Buzzcocks’ Howard Devoto, Cooper Clarke dived into the mushrooming scene of alternative gigs and clubs and found a whole new audience for his poetry. After the spiky, hard won crowds of the club circuit, punk audiences were a doddle. “If there was one thing that you could be sure of in those cabaret places, they weren't there to listen to no poetry,” he explains, but punk gigs were different “they were interested in lyrics. You read the lyrics of John Rotten and Joe Strummer and Mickey Jones, they're social lyrics that are meant to be understood, more than what'd gone before, when you'd say anything because it was just a vehicle for a guitar solo. Punk changed that. Punk rock invented a new kind of song lyrics, a new kind of way of writing songs, which was advantageous to me, obviously.” Cooper Clarke became the most sought after opening act on the scene, sharing stages with the Buzzcocks, the Clash, the Sex Pistols and Joy Division.

Inevitably a recording career beckoned. With the help of the Manchester punk scene’s in-house maestro, Joy Division producer Martin Hannett, Cooper Clarke eventually signing to CBS records in in 1978. Though more interested in the poetry itself, he was quickly talked round to making real records, (“it wasn't my idea, I'll be honest with you, but in places it's really good”) the words were the focal point, but they were wrapped in interesting music, influenced by off-kilter pop, electronica and art rock. “They had a point” he explains, after all if it was just poetry “who would play it more than once?” Still, it was the rhythm of the delivery, the words said aloud, that defined the work, “I write quite strict tempo stuff, that rhymes, it's not that difficult to put music over it.”

His three albums and numerous singles certainly weren’t “punk” as it was understood then or now- Hannett was far more interested in pushing the boundaries, future-proofing the music, just as he did with Joy Division’s Unknown Pleasures, against the time punk would fall out of fashion (“All those production values, the musical dexterity, as opposed to the fuzz box and block chording of, say, the Ramones” says John.) Hannett, as usual, was proved entirely right. “It didn't last very long, punk. It only lasted three years, didn't it?” says Cooper Clarke, “A flash in the pan like most pop crazes. It worked in my favour for a while, but in the 80s anything tainted with the punk brush...” he leaves that hanging.

The accepted story is that the definitive “punk poet” vanished from sight in the 80s, falling out of favour and sucked down by a crippling heroin habit. It’s not strictly true. The new material did dry up, but John Cooper Clarke has never stopped gigging, and his poetry continued to be heard across the country. “I had to work more than ever, that was the tragedy of the thing.” he explains “I was living a very feral life with the aforementioned dope addiction. I was stretching a limited repertoire a very long way throughout the 80s, and I'm very grateful to anybody who’s still a fan from those days- you put up with a lot, thank you.” What’s more Ten Years In An Open Necked Shirt stayed in print, going on to be the biggest selling poetry volume of the decade. The man himself may consider the period as “feral”, but seeds were being sown that would guarantee a healthy audience for the rest of his career.

Again it was reading his poetry out loud that pulled him back into writing fresh material, and created fresh audiences to hear it. By the 90s three John Cooper Clarke poems, including ‘I Wanna Be Yours’ and ‘Twat’, had been added to the GCSE English Literature syllabus. The accessible language and snappy rhymes combined with most teachers instinctive urge to do a Cooper Clarke impression when reading aloud, meant his work stood out a mile from the dry worlds of U.A. Fanthorpe and John Betjeman. The fact one of them was called “Twat” couldn’t have hurt either. The one time addict and punk rocker found himself on a kind of school trip package tour, with the likes of Simon Armitage, Carol Anne Duffy and John Agard. “We'd do the town hall in one of the major cities and they'd bus in a bunch of GCSE students.” explains Cooper Clarke, who snapped up the work, “I wasn't doing anything else at the time.”

For a town hall full of bored kids there’s no question who the stand-out turn was. “Obviously they liked me the best because there was bad language and off colour sentiments being expressed.” he says “As my wife points out, they were asleep till I came out.” It was more than fruity language and sex-jokes though, for many students exposure to John Cooper Clarke was a watershed moment, famously Alex Turner, Kate Nash and Ben ‘Plan B’ Drew all found his work at school and carried its spirit into their own. More than that, those school shows kickstarted an audience for live gigs that has carried on to this day. “I can't credit that enough.” he says of the GCSE shows, “Genuinely a whole new generation of fans came out of that.”

There’s still been no new John Cooper Clarke book, but these days there’s no end of new material, and no end of audiences willing to hear it. In the last decade he’s become a staple of music festivals like Glastonbury, Latitude and Bestival. A never ending tour of clubs and theatres sees him, carrier bag of words in hand, spinning anecdotes and gags, and always, always coming back to the poetry.

Four decades on from the pissed-up cabaret rooms and the tribalism of punk, Cooper Clarke is enjoying the best audiences of his career. “I like it like it is now.” he says, “You don't want a battle with the audience, why would you want that? There's all kinds of people come to my shows, there is no demographic. You can't say ‘there's a style watcher’, ‘there's a typical U2 fan.’ I'll tell you this - there is no specific demographic that I appeal to, my audiences are all types of people, the world over. All ages, types, racial, ethnic, whatever. All of em.”

Type “John Cooper Clarke” into Amazon’s books page and you’ll find just one entry under his name, the 34-years-old-and-counting Ten Years In An Open Necked Shirt, but that’s not all you’ll find. Pages and pages of new poets and writers are caught by Amazon’s search algorithm because they have Dr John Cooper Clarke listed as an influence. From Luke Wright to Stewart Lee, from Eddie Argos to newer names like Rob Auton and John Osborn. At live poetry nights across the county, from London’s always-rammed ‘Bang Said The Gun’ to a thriving scene at the Edinburgh Fringe, Clarke has created a generation of writers continuing the oral tradition.

“The only person I've ever been compared to is Alexander Pope,” he says, “that's alright. I can live with that. But millions of people have been compared to me. Me and Alexander Pope have invented a kind of poetry between us.” That makes sense. Both Pope and Cooper Clarke, writing three hundred years apart, make use of economic language, tight rhymes and controlled rhythms - A poetry that works fine on the page but comes alive when said out loud.

Anthologia - the 3 CD/DVD collection is out now on Sony. http://smarturl.it/JCC

"The first two are kind of a trojan h...