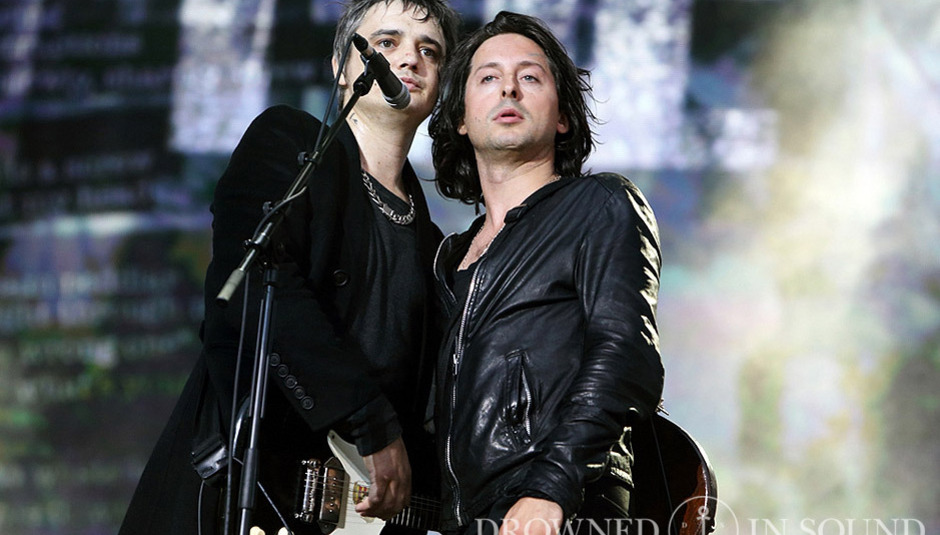 Tuesday 21st September 2004. The last time I witnessed a Peter Doherty set in this venue. To say it wasn't pretty would be an understatement. At the time he was fronting the then-fledgling Babyshambles with The Libertines seemingly on indefinite hiatus. Arriving over an hour late on stage and struggling to stand up when he did appear, it still stands out as one of the worst live performances I've ever seen. Afterwards I swore I'd never go and see any show involving Doherty again. But as ever, curiosity got the better of me.

To be fair, despite my early cynicism to the band's music; much of it fuelled by sycophantic hype bestowed upon them by some sections of the media; their output has grown on me over time. While it would be difficult to call any record that contains the amateurish 'Radio America' or 'The Boy Looked At Johnny' a bonafide classic, Up The Bracket has earned its place as a cultural phenomenon of the time. And like a fine malt, has actually improved with age. Nevertheless, it's 2004's often maligned self-titled second album that rekindled much of my interest. A record unfairly dismissed by many at the time yet in hindsight, one that knocks spots off its predecessor both from a songwriting and production point of view. Of course, that record proved to be their swansong and the love affair between Doherty and writing partner Carl Barat seemed irreconcilable.

Their reunion six years later proved to be another false dawn. Again, I remember watching them play a lack lustre set at 2010's Leeds Festival that was completely usurped by headliners Arcade Fire an hour later. Certainly they appeared to be a spent force. Out of kilter, no longer relevant and with seemingly nowhere to go. The musical landscape had moved on somewhat and that really did seem like the final curtain.

However, fast forward another four years to the summer of 2014 and another reunion was in the offing. Festival slots around Europe coupled with a Hyde Park homecoming shindig suggested their time wasn't up just yet. Indeed, having been present at their headline show in Lisbon last July, what stood out the most aside from Doherty looking healthier than he has done in over a decade was the professionalism of their set. Compared to the shambolic nature of their early sets, this was a performance of musical excellence. A band at their most competent and more importantly, playing as if they really did mean it.

So the announcement earlier this year that a new album was on the way wasn't that much of a surprise. More festivals ensued, culminating in the resounding success that was Glastonbury, and suddenly 2015 has become theirs for the taking. With said album Anthems For Doomed Youth due to hit the shops at the weekend and a string of low-key club shows announced in the run-up, this could be one of the most important weeks in The Libertines chequered history.

Tickets for tonight's show sold out in just three minutes, with some appearing on eBay for as much as £350 hours later. Monday nights aren't exactly renowned for being the liveliest but from late afternoon onwards, the bars and pubs situated in close proximity to Rock City were buzzing with anticipation. With reports filtering out from the previous night's show in Glasgow that the band arrived on stage an hour later than scheduled, the customary will they/won't they show up questions also reared their head. Which I guess has become standard when discussing Peter Doherty and The Libertines.

With three support acts on the bill; we arrive too late to catch Dundee's Vladimir but in time to witness Barnaby Courtney and Feverist, both signed to the same management company as tonight's headliners. While the latter sound like the kind of band whose music will be played over the goal of the month sequence on Match Of The Day in the future, the former's naive charm reminds us of a young Jamie T.

With an allotted stage time of an hour and forty-five minutes, The Libertines arrive bang on the dot. Unfortunately what that seems to encourage is a spate of general unpleasantness culminating in pockets of violence erupting around the venue at regular intervals, several escalating into full scale fights (during 'Death On The Stairs', some poor blighter quite literally gets the living daylights kicked out of him by a group of thugs near the stairs to the right hand bar). For all their faults, it's hard to envisage any of the band endorsing such behaviour, and despite the hostile atmosphere their performance is indeed, exemplary.

As expected, the whopping twenty-four song set (eighteen in the main part, six in the encore) is split quite evenly between all three albums. Explosive opener 'Horrorshow' kicks off proceedings in fine style, Doherty's delivery more menacing than on the recorded version. 'Vertigo' and 'The Delaney' follow suit, each providing incendiary blasts from the past that showcase both frontmen's talents. And so it continues for the whole of the set. 'Can't Stand Me Now' and 'What Katie Did' serve as timely reminders why those dismissive of that second album should really give it another spin. While 'Time For Heroes' and 'Up The Bracket' are embraced like old friends at a school reunion.

Of the new songs aired this evening, two stand out from the rest. The title track from the new album, a lilting ballad not too dissimilar to the aforementioned 'What Katie Did' is delivered impeccably by Barat. While 'Heart Of The Matter', swapped for old favourite 'I Get Along' at the last minute during the encore and played live for the very first time this evening sits at the other end of the musical spectrum. Boisterous and brash, it's a return to their most primitive garage punk beginnings and sits comfortably placed in between 'What A Waster' and 'Don't Look Back Into The Sun'. Of the rest, album opener 'Barbarians' introduces the encore and while not quite as immediate, will undoubtedly become a staple of their live set. Unsurprisingly, lead single 'Gunga Din' is mouthed back word for word by sections of the audience despite being one of the weakest tracks off Anthems For Doomed Youth while 'Bucket Shop', a song that was first recorded in 2000 but never released until now makes an unexpected, if slightly incongruous appearance towards the end of the main set.

As 'Don't Look Back Into The Sun' brings the show to a celebratory close, a jubilant Doherty launches his guitar then himself into the arms of the adoring throng out front. Barat and drummer Gary Powell follow suit and more chaos ensues. But then that's what we've come to expect from The Libertines, and when all's said and done, we wouldn't have it any other way.