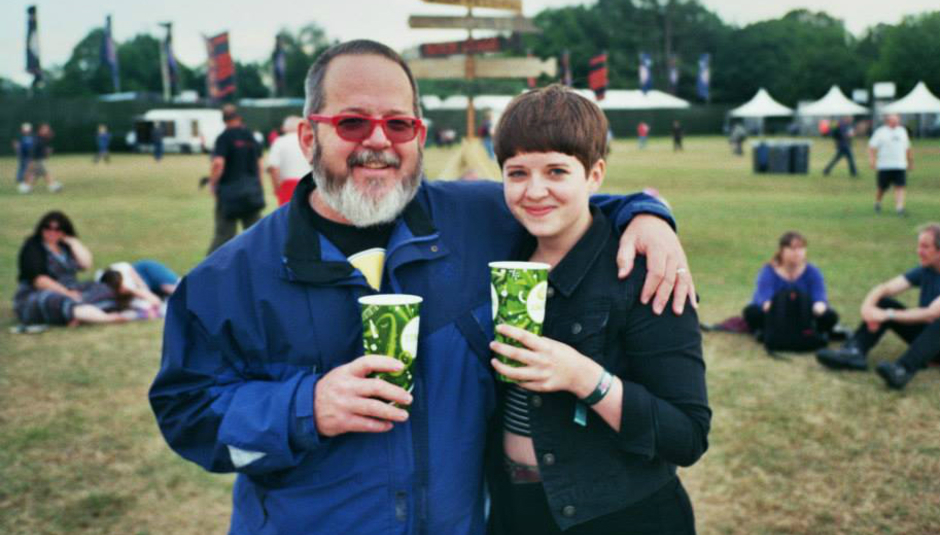 Being in the American Navy, my Dad would often be away for months at a time. I would record Eastenders on our video player and send him handmade cards – my mum letting me stay up late to talk to him on the phone. I was so distraught when he left once, but knew I had to be chill about it for his sake, so I announced through stifled sobs that I was crying on behalf of my rats Pebbles and Bam-Bam, as they obviously couldn't cry themselves.

One thing that always got me through it though was the music, man! Both of my parents had a huge influence on my taste – my mum claims the first song she ever heard me sing was R.E.M's 'Shiny Happy People' in the backseat of our car, Betsy. My dad would sing Tom Petty's 'American Girl' to me on a regular basis (much to my annoyance come teenage-hood) and there's a home video of me in my diaper fully rocking out, Wayne's World style, to 'Bohemian Rapsody'. So, whenever he was away, I would listen to the songs that reminded me of him and before I knew it, he would be back in the house, booming Southern accent n' all.

Last year, my Dad gave me one of his beloved Bruce Springsteen vinyl collections. This was a big deal. Springsteen is his ultimate and we've been to see him together three times – his tipsy arm around my shoulders, screaming every word to 'Born to Run', mimicking the Monica dance from 'Dancing in the Dark', and holding back the tears during 'The River'. Rock, country and blues is his jam and after driving 12-year-old me and my friends to endless Blue concerts, the least I could do was introduce him to the world of music festivals.

Desperate to see one of his idols, Gregg Allman, we decided to go with Ramblin' Man Fair. With a line-up of Allman, Seasick Steve, Scorpions, Blue Oyster Cult and Dreamtheatre, the festival was bound to attract a certain sort of reveller and let's be real, that ain't me. The thought of spending two days with a bunch of old dudes, watching more old dudes was not my idea of a rad time but my dad's fervent excitement made me kind of excited too.

We arrived on Saturday morning and made our way towards our Podpad. Now I don't know what's up with festivals these days but it seems the over 40s only want to “glamp” and that's the only option you have here (if you want to stay on site). You also can't bring your own booze onto the campsite, which rules out introducing my dad to in-between-bands Messerschmitt shots. Of course there's “affordable” options on site, with flat Tuborg coming in at a £4.50-a-pint steal but this is a far cry from lugging Strongbow into Leeds festival.

The Podpad is nice enough – it's basically a brightly painted shed with two wooden bed-shaped shelves either side and some lilos thrown on top. The welcome team are very, welcoming, excited for my Dad's first festival experience and eagerly offering us the free Haribo on offer in the reception area. This is pretty weird, though. Yes there's nice showers and nice toilets, and everything is very nice, but charging folks almost £400 to flush an actual toilet, charge their phones and sleep in a wooden box you can lock is baffling. I guess those over 40s know how to live – and spend that dollar.

It's 3pm and my Dad wants to do shots. “Jagerbombs, dude!” he exclaims before handing over a cool £12 for two. We peruse the stalls of garish cowboy hats (his head was too big to fit any of them) and floral headbands – “I always wondered where people got those!” – before arriving at the record fair. “Oh my gooooooooooooosh,” he says, mesmerised, before picking up a copy of The Doobie Brothers 'What Were Once Vices Are Now Habits.' “I used to get so, so high to this record,” he smiles. “Man, I wish Johnny and Maxie were here.” Johnny and Maxie were my Dad's best friends in High School and watching these teenage memories come back to him reminds me that my Dad is an actual person – not just ~my~ Dad. I forget that he had a life before me. He's Bob Maine. Moondog Maine. And he used to get stoned with his buds. 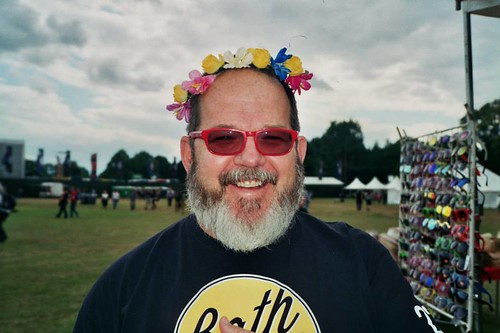 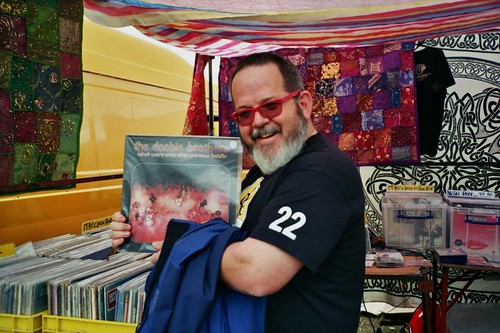 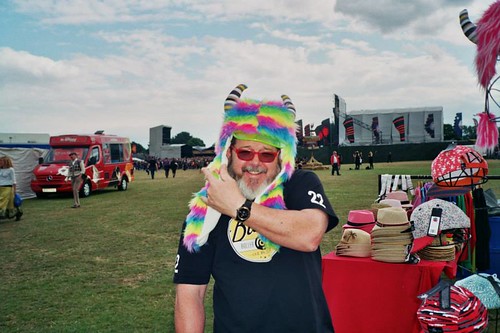 Festivals are an escape from reality. It's not like my dad and I don't talk in real life – we talk almost every day actually – but being in this environment brings new bonding and we talk as friends, not as father-and-daughter. I ask about his time picking tobacco when he was 13 – “My arm would be entirely black by the end of the day” – which leads us to smoking a few roll-ups together. This is big. I have been hiding my social smoking from my parents since I was around 20 and sitting there, beer in tow and fag in hand with my pops was weird and kinda wonderful.

The first band we stumble upon is Della Mae. With a fiddle champion in their midst, this five-piece are seriously bad-ass. They're the Spice Girls of the Americana world; seamless harmonies, stunning solos and enough bassy sass to get some old dudes to tap their toes. It makes me wonder why Americana and Country isn't more popular over here and then I remember not everyone sounds like Della Mae. Della Mae forever.

After 4-ish, things get real. My Dad and I are matching each other pint-for-pint – luckily, we found the ale tent; unluckily, we want to try loads of them so come early evening, we're well on our way to the danger zone. We imitate the cowbell scene from SNL whilst watching Blue Oyster Cult; we chat to a nice older couple about having kids (seriously, why do older adults always have a hot take on my uterus?) and we eat an £8 burger. There's none of the usual but-I-want-to-go-and-see-this-band friend-pleasing that comes along with other festivals– it's just me and my Dad, swapping stories, smoking roll-ups and talking to strangers.

Jason and the Scorchers finish the night for us and with songs like 'Bible and a Gun,' and lead vocalist Ringenberg sashaying around in a glitter-soaked, fringed denim shirt, my Dad is in his absolute element. He's right at the front, hands in the air, not a care in the world. I've not seen him like that for a long time.

Weirdly, the festival, quite literally, shuts down bang on 11pm. We emerge from the Outlaw Country tent, ready for more beer but it's utterly deserted. We're kindly kicked out by a security guard but I am frustrated that my pops can't sample the festival night-life.

The next morning we are both 'hanging', BIG TIME. “We are not soaring with the Eagles after hooting with the owls,” my Dad utters. After finally making it back into the arena, post-puke (yes, both of us), it's chucking it down. Cooped together in the merch tent, eating our hangover-cure Calippo's, we manage to stand up for long enough to catch Jethro Tull's Ian Anderson on the Prog Stage. I never really got the whole Jethro Tull thing but standing next to my Dad, eating a massive slice of pizza gives Anderson's set a sort of magic. And he's so god damn enthusiastic you can't help but give it to the guy.

Seasick Steve starts over on the main stage and thanks to his natural charm, my Dad and I are in higher spirits. This guy is really good at what he does – thrashing homemade guitars made out of cigar boxes and road signs, he tells adorable in-between stories of always trying to “make it” and constantly thanks the UK for buying his stuff. It seems our fascination for American culture has done Steve good and got Steve paid.

Three days prior to his (only UK) appearance at Ramblin' Man, Gregg Allman lost his mother, “Mama A”. It's a poignant moment that reminds me that my Dad won't be around forever. However bleak that sounds, I look to my Dad as he's singing 'Statesboro Blues' – “This is my jam!” – with a teenage-like glint in his eye. For that hour he's not my Dad; he's a dude enjoying the songs of his youth, the massive smile on his face confirming his elation. Despite the psychedelic, stock-photo montage showcased as the animated backdrop (it was seriously weird), I am having the time of my life.

As a newbie on the festival scene, Ramblin' Man still has some kinks to iron out – don't put Hayseed Dixie on in a tiny tent, for example. It could be better, cheaper and more accommodating and I have no doubt that it will be this time next year. To be honest though, the festival could have been the ultimate humdinger and I still would have had a great time because, to be an utter cheeseball, I was with my Dad. The experience made me realise I don't just love him – I actually like him too. Like, as a real-life human person. I guess it's true what they say – those that puke together, stick together.