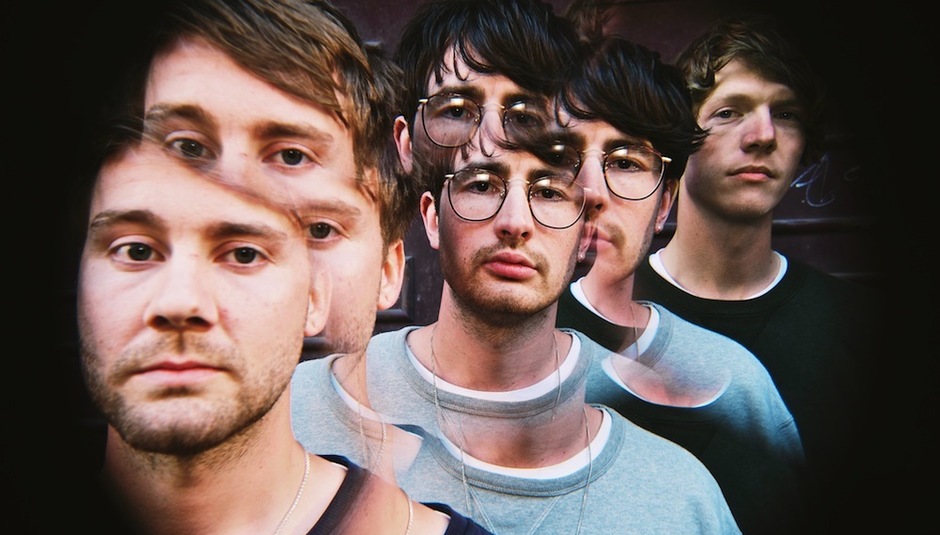 “I'm sat in, like, a stockroom,” Stu Hopkins says. A thriller-style zoom-out reveals that this interview is happening in fairly unlikely circumstances: we start close-up on an iPad and pull back to reveal a stock room... a shoe shop ...Chichester. The reason Hopkins is in a stockroom is because he’s at work while we’re trying to Skype about TRAAMS’ upcoming album, Modern Dancing - I picture him perched on a pile of shoeboxes, random trainers strewn about the place.

Since they’ve just announced a new album and garnered near-universal internet adoration for the first track from it, speaking to TRAAMS’ lead singer while he’s crouched in a stockroom seems a bit of a juxtaposition (bassist Leigh Padley still works in a record shop while drummer Adam Stock does what Hopkins describes as “buildery stuff”). But the band has never really had a grand plan other than to release stuff, play gigs and see what happens, and the laid back approach seems to be working for them so far.

“This is what's been really nice about Succulent,” Hopkins says. “Just dropping it out and sort of seeing the reaction it got and then just going with what happens after that. It seems more fun.” He’s talking about lead track Succulent Thunder Anthem, a menace of a song that makes me want to use words like “urgent” and “visceral” as though I’m a 99p shop Zane Lowe. But maybe you should forget all that because on Modern Dancing, the single is the exception not the rule.

“Succulent's probably the agg-iest thing we've ever written,” he adds, referring to the driving pace, the repeated refrain of “You’re not my friends” and dark warnings about breaking your neck. “But it's definitely a more positive record,” he says of the album as a whole. “The first record came from a really dark place and from quite a lot of hard life experiences and stuff and this one's been a bit more fun.”

Like most TRAAMS songs, the still-fairly-dark lyrics to Succulent Thunder Anthem just kind of happened. Rather than sit down with a pen and notebook, Hopkins freestyles sounds and words over the music the band writes together. Ideas and themes often come from somewhere in his subconscious. “We never really write lyrics first,” he explains. “So it tends to be the music and then I sing over the top - almost like phonetically and then I sort of build it backwards. When you're doing it, you're just sort of spouting something out and then you look back at it and you go, 'Oh yeah, that was totally about that'. But you don't always realise.

“Sometimes you don't want to realise about what it's about. I've done that before where I've written stuff and I've looked back and gone, ‘Fuck, yeah that really is way too close to the bone for me to talk about’. There's songs on the first record - like Demons - which is really really literal. Really way more open than I think I probably ever am with anybody really, apart from like my really close family. And that's kind of weird.”

Although watching out for ice on the road is good general advice for life, Succulent Thunder Anthem wasn’t inspired by a specific event so much as imposter syndrome, the feeling that your friends aren’t really your friends and everything’s about to fall apart. “It's mainly about paranoia and self doubt, and the fear that the worst thing that could happen will happen or is currently happening,” Hopkins says after a bit of thought. “And it's talking about that knee jerk reaction that happens when you feel like you’re losing control and panicking and you try and sabotage it or run away, you know?”

As a second album, Modern Dancing is not only more positive but it was also much more focused. The band went into the studio with Hookworms’ MJ behind the production desk and a much clearer idea of what they wanted, right down to the tracklisting. The record is a journey “about getting happy or happier”, Hopkins says, “And relinquishing that constant tense nagging feeling that ‘Everything is gonna go to shit any minute now’, or ‘Everyone hates me’, or ‘I'm doing it all wrong’. I think that's why I referred to it as a more positive record. I think I've worked out how to keep myself safer both mentally and physically these last couple of years. And I think that optimism can be felt in this record.”

Because being in a band, it turns out, is really fun. Where Grin was a darker album born out of a darker time in their lives, Modern Dancing is about the good times TRAAMS have been having in the years since. As a band that adopted the super communal Brighton DIY scene, their favourite parts of band life are playing shows and festivals then hanging out afterwards, “milling around, meeting other bands”. Even Modern Dancing’s artwork is somewhere approaching playful - a friend’s matchbox-sized painting of a tiny dog amid a light grey backwash. “The first record was so dark and the imagery was dark - this record, we really wanted something a lot lighter.”

TRAAMS are usually described as “post-punk”, a genre that doesn’t seem to mean much other than “we’re not really sure what genre this is”. So how should you describe TRAAMS to your parents' friends who’ll be even less convinced by “post-punk” than me? “To my parents' friends... hmm. Post-punky-noisy-grungey-sort-of-indie, essentially. That's pretty much what I normally say,” I picture my mum trying to figure out how to respond to that. I’m not sure the description would cut it, and I’m right. “Pretty much they always just look at me with blank faces like o...k... And then I go, ‘Do you like The Stooges?’ and they go ‘I don't know The Stooges.’ And I'll go, ‘Well, did you like Iggy Pop? And do you like Talking Heads?" And they go, "Yeah!" And I'm like, ‘It's sort of like that.’

So is the plan to quit their day jobs and become full time post-indie-pop stars? There’s no immediate plan to tell their bosses where to shove it. In fact, it sounds like there’s still no grand plan for the band, and Hopkins sounds quite content with the way things are now. “I think if we wanted to go out on tour 24/7 we could probably do it now. But I dunno. I quite like the balance we have. Sometimes I worry about messing with it too much because the dynamic seems to be... [perfect]. How we write and how we interact as a band - the balance seems to be there. It took us a while to get it right after launching into the first record. I think now it feels like the tension is right.

“I think if you overthink it, especially for me, I'll just end up doing my head in,” he adds. “So I might as well just relax and see what happens.”

Modern Dancing is out on November 13.

"I am benevolent to the point of abse...