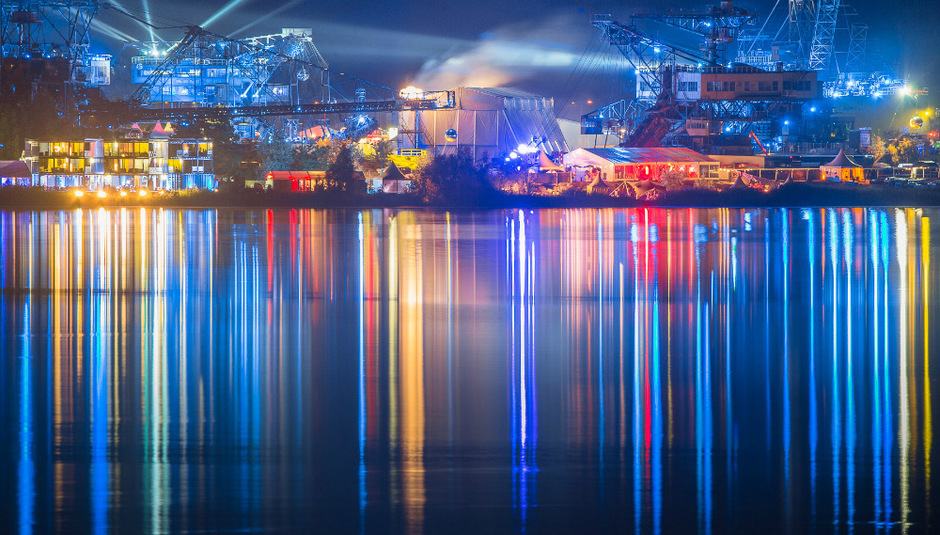 The liminal and hyperreal world of Melt Festival 2015

The liminal and hyperreal world of Melt Festival 2015

First time visitors to the iron city of Ferropolis draw an audible breath as what begins as an impossible sketch on the horizon swells into a vertical labyrinth of perspective-defying machinery. For 51 weeks a year, these steel monuments to Germany’s former industrial might serve as an outdoor museum, permitting those curious enough to make the 130km south of Berlin to potter around their perimeter, posing for incongruous family Facebook snaps in front of an earth-ravaging circular saw.

But, for four days a year in mid-July, the very concept of a museum ceases to exist. Instead, this quaint rural outpost beckons those with techno in their bloodstream to make the pilgrimage into the liminal and hyperreal world of Melt Festival. Like all the best gatherings, this is an event where the click of reality’s pause button is felt simultaneously across the 20,000 in attendance, where the world of swivel-chairs and conference calls dissolve under hazy lakeside sun and free-flowing Warsteiner. For those who’ve been lost in the iron city’s embrace, returning year after year begins to feel less like a rational decision and more like an irresistible siren call.

The temperature is Albuquerque hot, comic book hot, fry-an-egg-on-your-car-bonnet hot. Our pasty English bodies drip in sweat and Malibu sun tan cream, we all dig our feet into the sand by the vast, shimmering lake that separates the camping site from the main arena. I learn that I cannot tread water (seriously guys, is there a YouTube tutorial you can direct me to?) and we all switch to energy conservation mode, chatting on a low-simmer. It’s a good job, because later on by the beachside stage we hold witness to Jamie xx, whose set unfolds in a quietly magisterial way, soaking up the last of the sun’s rays and beaming them upon a crowd of grateful devotees. By the time he plays ‘Loud Places’ the feeling of latent euphoria erupts skywards, and we veer onwards. A larger crowd awaits Berghain resident Marcel Dettman, whose minimal, scalpel-sharp cuts bristle with claustrophobia. We decide it’s a bit early for all that, so we head back to the beach to catch Bonobo, whose organic and expansive electronica paints the darkening sky a glorious watercolour hue.

Nils Frahm’s ‘Says’ is one of my tracks of the decade, so I plead with my pals to join me in the hushed and reflective gathering that forms on the main stage. People sit cross-legged, eyes closed, a collective subconsciousness ushered away by his delicate arrangements. Perhaps it’s an odd choice for a big stage headliner, and across the arena there’s a sizable crowd swelling for La Roux, though not one I’m too tempted to join. We end the night with a slick set by Flume whilst relentless party jams from Modeselektor take us through until sunrise.

German festivals are super-civilised, and Melt feels like The Jetsons to Reading and Leeds’ Flintstones. Cash is done away with via an electronic chip on your wristband, queues for food and drink are whittled away in seconds, and German purity laws mean that your 1euro beer is cleaner than mountain water. You’d have to be going out of your way to feel hungover or sick here, and even a Vine-worthy freak hailstorm does little to dampen expectations for what is undoubtedly the biggest night of the weekend.

We start with Django Django, a band who come across like a four-headed Transformer, instrument-swapping and role-hopping with seemingly every song. They clearly win over new fans here, replicating the multi-layered sound of their debut LP without sacrificing any of their percussive spontaneity or groove. We weren’t sure what to expect from Georgio Moroder. Whilst the 75 year old is about as close as it gets to a living deity, we were all craving a ninety minute fire emoji Boiler Room set by this point, and what he delivered was more of a souvenir tea tray of a performance, veering towards the novelty with 40 second snippets of classic cuts rolled out in front of a huge video wall of peak-era disco. I could imagine an alternative set where he drives a Testarossa to the moon via twelve minute Midnight Express vibes, but my dream moment in Italo heaven will have to wait.

Next up was Kylie Minogue, who everybody immediately shat themselves with excitement over. Kylie Minogue, a woman who could headline any festival on Earth, right here in front of our poxy, ungrateful eyes. Kylie Minogue, whose solo tickets probably sell for more than any of us have paid to be here, whose songs are known by 98% of the world’s population, whose been in your ears and eyes since you were born and is now on-stage wearing a flame red dress that is at once phenomenally short and phenomenally sequinned - KYLIE MINOGUE! And so it went for a full hour and a half of breathless b2b hits, from the panther-slink hypnosis of ‘Slow’ to the waltzer-ride rapture of ‘Love At First Sight.’ By the time she left the stage it became clear that everyone in the developed world is in love with her whether they realise it or not.

Just as we drifted back to semi-consciousness, Jon Hopkins laid down a seismic event of a set, his fierce progressive techno seemingly breathing life into the laser-firing metallic beasts around us. Like many of the acts here, Hopkins’ expansive electronic music found a sense of belonging in the open air, with the landscape reshaping the music in a way that seldom occurs within the narrow confines of a darkened room.

After blistering sets from Clark and The Zenker Brothers we walked back to camp, looping round the circumference of the lake to admire the arena from distance. Here we saw a nest of amatuer photographers, kneeling with their tripods amongst the reeds and tall grasses. Though it was close to 6am they seemed undeterred by tiredness, and some hadn’t even got wristbands for the event. But as the son arced its way over the horizon, it was clear that these are guys who come every year regardless, purely to capture Ferropolis at its radiant best.

How to build a festival in the middle...