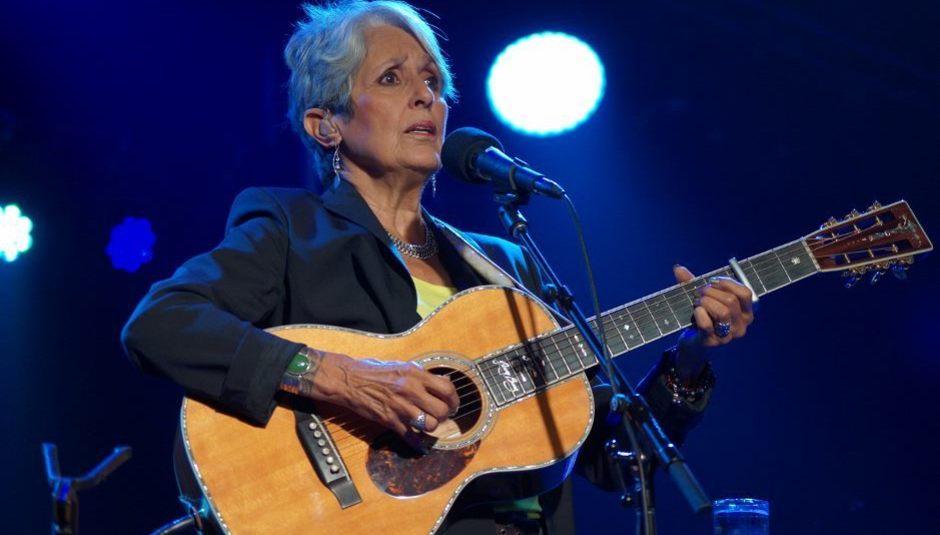 Cambridge Folk Festival has played host to dozens of iconic figures since first opening its doors in 1965. So this year's return of Joan Baez - arguably the first lady of folk - to the coveted slot of Saturday night headliner undoubtedly raised a few eyebrows, not to mention shift a few tickets. Not that Cambridge Folk Festival ever needs much assistance with such things, being one of the few UK events of its kind to annually sell out in advance.

This year's event would prove to be no different, even if the top end of the bill showed a distinct lack of quality (Baez being the obvious exception) to previous years. Set in the picturesque surroundings of Cherry Hinton Hall, it can also boast at being one of the few music festivals to have retained a true community spirit in the face of commercialized adversity. Preferring to include the likes of Guinness and Fever Tree tonic water among its sponsors rather than some of the more corporate brands in those fields. There's a genuine and intrinsically refreshing vibe here that even the camping chair mafia who park themselves in front of the main stage (and in some cases blocking designated walkways and fire exits) can't spoil.

Musically, this year's bill seems to be about diversity, not just in terms of covering a whole spectrum of artists whose roots - indirectly or otherwise - lie in the genre, but also demographically too. What this means is a large proportion of female and ethnic acts stand proudly among a line up that has maybe suffered from male domination at times. Certainly the times they are a changing as the scene's Godfather may have once said.

Having set up camp in the nearby Coldhams Common - itself a hotbed of late night post-festival entertainment - DiS only arrives on site in time to catch the tail end of Katzenjammer's set on the second stage. However, we're suitably blown away by the Norwegian troupe's experimental set which fuses post-rock and chamber pop with more traditional elements of folk.

The following afternoon having recovered from the previous night's excesses, Kentucky based country singer Angaleena Presley's dulcet tones provide a soothing entree to Friday's proceedings. Previously rendered comparisons to Loretta Lynn and Tammy Wynette aren't wide of the mark, and as a perfect pick-me-up her fifty minutes set is just the tonic. New Orleans based Chris Smoother can count the legendary Bonnie Raitt and Allen Toussaint among his fans and it's easy to see why as his distinctive soulful rasp under stage two's canvas offers a wistful respite from the scorching mid-afternoon sun.

One of Cambridge Folk Festival's most endearing features are its hidden stages such as The People's Front Room, and this year's line up featured a host of new talent destined for greater things in the future. Local artist China Bowls, Somerset based Ruth Blake and London's Laura Victoria proved the pick of the bunch, channeling the spirits of Billie Holliday, Joni Mitchell and Tori Amos respectively.

One artist in little need of introduction is Wilko Johnson, whose well-documented and brave fight against pancreatic cancer has coincided in an upsurge of interest in his music. Complete with arguably the tightest rhythm section we'll witness anywhere this summer - drummer Dylan Howe and Blockheads bass player Norman Watt-Roy, he plays an all-action career spanning set which provides a timely reminder of he and his accomplices incredible talents. A more than worthy headliner in his own right, only the bravest of the brave would dare to follow in his footsteps this evening.

But then Frank Turner has always been one for battling against adversity, and even though he apologises for "not really being folk" after a rousing 'If Ever I Stray', the masses out front have fallen for him head over heels judging by the response his set receives. As a result, Nick Mulvey's tranquilly delivered performance becomes an anti-climax that doesn't really subside until The Proclaimers predictably end their set with 'I'm Gonna Be (500 Miles)', which naturally results in a sea of arms, legs and dances of all shapes and varieties. Indeed it would be churlish and unfair to accuse the Reid brothers of only having one song, both 'Cap In Hand' and an Erica Nockalls assisted 'Sunshine On Leith' providing genuine moments of awe.

The next day, country legend Gretchen Peters showcases her wonderful talents as a performer in her own right despite being better known for penning hits for an array of other artists from Etta James to Trish Yearwood. Influential reggae collective The Skatalites are another delight, serving up a Saturday teatime treat for those of us basking in the sun.

One of the folk scene's biggest success stories in recent years are The Unthanks, and their hour long set on the main stage further demonstrates why their crossover appeal is so widespread. Playing a set largely focused on material from this year's colossal Mount The Air long player, highlights come thick and fast. Particularly the title track, which has a stripped down Sigur Ros feel about it and the woozy charm of 'Flutter' aka the finest song Portishead never wrote. As with Wilko Johnson the previous evening, The Unthanks preove a hard act to follow but multi-instrumentalist cum gospel singer Rhiannon Giddens does a fantastic job, particularly on the poignant 'Black Is The Color'.

All eyes though, are on tonight's headliner. With over thirty albums spread over five decades to her name not to mention a lifetime of raising awareness on numerous humanitarian issues from gay rights to the recent war in Iraq, her iconic status is second to none. Still looking sprightly at seventy-five years of age, she cuts a diminutive, captivating figure throughout her performance. Accompanied by just a microphone and acoustic guitar, every word uttered is treated with the utmost respect by the respectfully silent throng out front. Having such an extensive back catalogue of material to choose from makes it inevitable some people's favourites will get left out, and while the omission of 'Diamonds And Rust' is a minor talking point later, an impeccable 'Silver Dagger' coupled with a flawless rendition of 'It's All Over Now Baby Blue' more than make up for it.

While Sunday's line up was perhaps the least mouthwatering (on paper at least), Radio 2 Folk Singer Of The Year Bella Hardy kickstarts the day in pleasant fashion over on the main stage. The suited and booted Ukulele Orchestra Of Great Britain follow joyously, delivering renditions of Blur's 'Song 2' and Lady GaGa's 'Born This Way' among many others in their own unique style.

One of the worst clashes of the weekend sees Flo Morrissey in The Den up against Joan Armatrading on the Main Stage. Being so impartially indecisive we catch the first twenty minutes of Morrissey's excellent set, which evokes visions of a young Hope Sandoval at her most elegiac before hotfooting over to catch the back end of what could out to be one of Armatrading's last performances. While the inevitable calls for biggest hit 'Love And Affection' are initially met with disdain before it's eventually played towards the end, we're more taken aback by her incredible guitar technique which fuses Hendrix style licks with Delta blues influences.

Mother and daughter Chris & Kellie While, taking a break from their duties in The Albion Band to promote new LP Indigo, also put on a delightful performance over in the Club Tent. Keston Cobblers Club also attract one of the largest crowds of the weekend to the second stage. So large in fact, that DiS struggles to get in and we head off in search of entertainment and enlightenment elsewhere.

The less said about this evening's headliner the better other than it seems a bizarre choice based on one admittedly massive hit single. Nevertheless, after Van Morrison closed last year's festival Passenger filling the same slot has an anticlimactic ring about it and CoCo & The Butterfields energetic fusion of folk, hip hop and jazz in the Club Tent seems more appealing.

Nevertheless, minor gripes aside, this year's event was a hugely enjoyable success. And with planning already underway for 2016's shindig, who's to say the 52nd edition of this national institution won't be its finest yet?