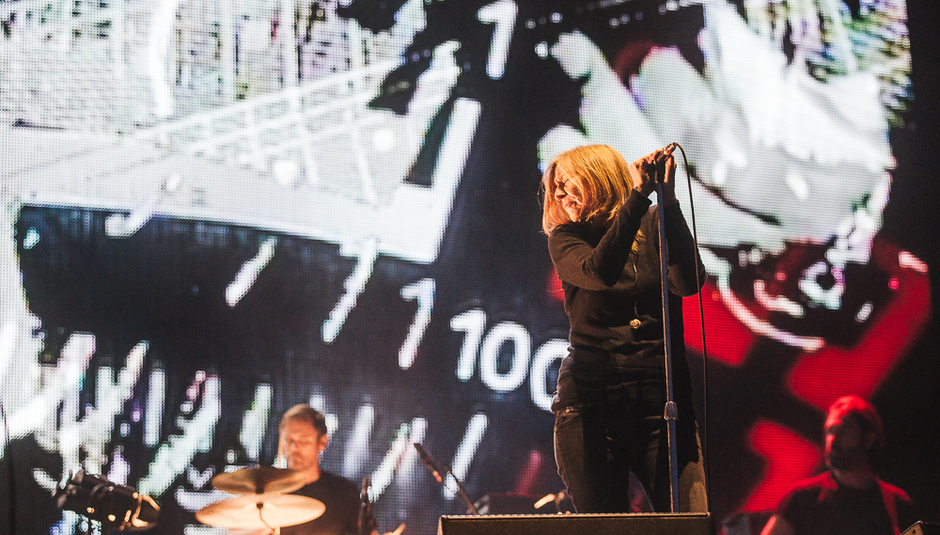 The Latitude Festival is being a little low key celebrating its tenth birthday this year, and I don’t exactly blame it. For all the constants – the idyllic Suffolk setting, the inescapable middle class-ness of the audience, the admirable dedication to arts other than music, the painted sheep – there’s probably no festival in the country that’s changed more at a fundamental level over the last decade. It is almost incomprehensible now to think back upon the fact that its earliest editions featured no dance music, and everything shut down at 10.30pm. You have to think there would actually be a riot if they tried that now, at a festival that’s arguably now crying out to have something or other open till 5am.

More so than most festivals, Latitude is increasingly like a choose your own adventure, with radically different outcomes depending what you’re into. We all know somebody who hangs out at that funny piano bar under the stone circle at Glastonbury for five days in pig-headed refusal to see any bands whatsoever. But really ‘do wacky shit’ or ‘see bands’ are more or less the extent of what 95% of Glasto punters do. At Latitude some folk watch theatre all weekend and sack off all the bands, or watch bands all weekend and sack off everything else, or comedy, or literature, or just go swimming in the lake and sack off any entertainment provided by human hand.

Ever since 2011, when Paulo Nutini was unveiled as a headliner at the festival’s London launch as if that was absolutely fine, it has been questionable whether the organisers even expect the average punter to want to watch all three headliners. I SURE KNOW I DIDN’T

On the Friday night, jazzed up after an unexpectedly fun reminder of Santigold’s existence and an absolutely magnificent set of taut, playful brilliance from Caribou I can’t imagine anything more anti-climactic than watching Alt-J. As it turns out this was a failure of the imagination, as thanks to a text message from DiS’s sinister owner ‘Evil’ Sean Adams I am tipped that Thom Yorke is about to play a secret headline set. In fact it turns out to be Ed Sheeran. Me and my friends pull faces like brattish children at the fact that Latitude have managed to lay on the biggest solo singer in the country as a late night treat for everyone, sourly sloping off to watch Christopher Brett Bailey's guitar symphony ‘This Machine Won’t Kill Fascists But It Might Just Get You Laid’. With a name like that, it would be brilliant even if it wasn’t brilliant, but it is, so there.

Two nights later, we are far too sniffy to see Noel Gallagher’s High Flyin’ Birds. We’re also not even at Latitude - one thing I’ve noted over the years is that the bigger the festival grows, the greater the proportion of attendees who bugger off on the Sunday, to the point that hanging around for the final night can feel faintly awkward. So we leave after a morning swim, two theatre shows and no bands - tonight I am not a rock and roll star.

Saturday, though, let’s talk Saturday. At perhaps 3.30am I feel very clever at coming up with what I call The Thom Yorke Paradox. For all Sean Adams’ legendary evil, it turns out Friday was just a mix-up and that the Radiohead leader is playing the iArena on Saturday night. Unfortunately this was publicised pretty heavily in the end, and as near as I can tell the only way to get in before it was sealed off by friendly but merciless security guards was to leave early enough in Portishead’s headline set to miss their special guest, one Thom Yorke. So the paradox is that in order to see Thom Yorke, you have to miss Thom Yorke. Choke on that Hawking, you pygmy.

Anyway, I didn’t get into the iArena despite spending 40 minutes attempting to do so, so it’s perhaps inevitable that I will proclaim that what I did was the best thing. But seriously, Portishead were amazing. They’ve no new songs (unless you want to count 2009’s ‘Chase the Tear’), but two things keep their set feeling super-fresh. One, the passage of time has only served to highlight the fact that Third is a work of towering genius, with every cut an absurd thrill; two, after beating about the bush quite a lot at the end of the last decade, their show scales up wonderfully to a full scale outdoor festival. As you possibly know, at one point a giant David Cameron appears on the screens behind the band, with blue lasers shooting out of his eyes and ‘five more years’ emblazoned menacingly underneath. It doesn’t overpower the song that’s playing though, because the song that’s playing is fucking ’Machine Gun’. So Thom comes out for ‘The Rip’, and it’s lovely, then I think Beth crowd surfs a bit and as it ends we’re not so much sad that there’s not more Portishead material as gobsmacked at how totally complete a band can feel with just three records of work.

Then we queue for Yorke, and it doesn’t go so well, but we note Horace Andy is on in the Film and Music Arena and it’s absolutely wonderful: slick, soulful, political reggae that was probably more fun than whatever Yorkey boy was playing, or so we tell ourselves. That’s the joy of Latitude: you chose your own adventure, and you’re always right.

Six things we can't wait to do at Ken...