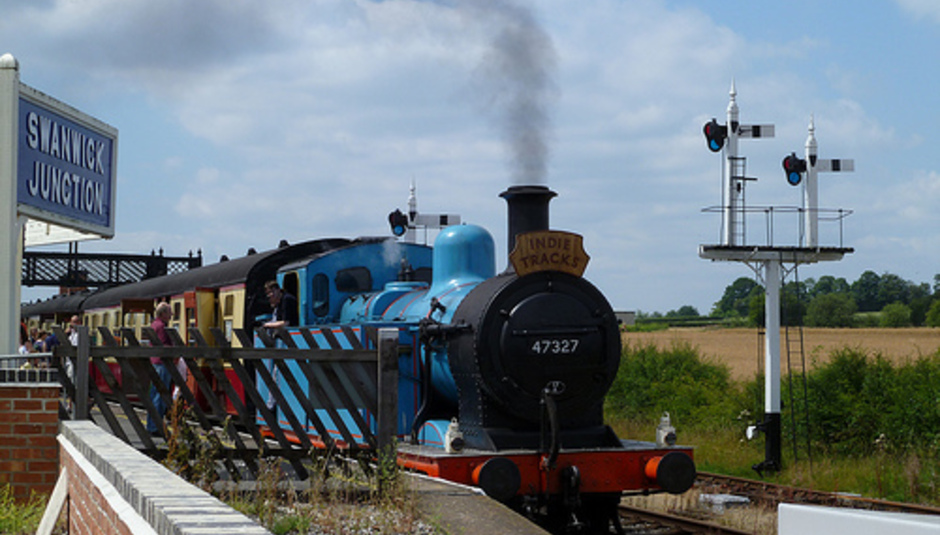 Indietracks has established itself as one of the most unique festivals of its kind since first opening its doors in 2007. Based on the site of the Midland Railway Centre in the heart of the Derbyshire countryside, it combines steam trains and railway heritage museums with indiepop music and craft workshops. Set across four stages including one in a church and another on the carriage of a steam train, Indietracks also boasts a selection of fine foods and real ales including the legendary Gopal's Curry Shack.

Taking place over the weekend of 24-26 July, this year's line-up features over 50 artists from around the world including Cinerama, The Pains Of Being Pure At Heart and The Go! Team who headline the Friday, Saturday and Sunday nights respectively. Tickets are still available priced at just £75 for the weekend or £39 per day (Saturday & Sunday only).

Each year, the organisers put together a mammoth compilation featuring many of the artists scheduled to play, and this year is no different. Indietracks 2015 collects 49 acts from this year's bill for just £3, with all proceeds going to the Midland Railway Trust.

In the meantime, here's 10 artists we're literally busting a gut to see over the course of the weekend.

LA based singer/songwriter Colleen Green has been picking up fans on both sides of the Atlantic since first album Milo Goes To Compton landed in the early part of 2011. Often compared to the likes of Kathleen Hanna, Juliana Hatfield and Shirley Manson, her biographical vignettes have attracted a wave of critical acclaim ever since. While this year's I Want To Grow Up, which features collaborations with members of Jeff The Brotherhood and Diarrhea Planet only serves to reinforce Green's reputation as one of the most prolific and consistent songwriters of her generation. Not to be missed.

Equal parts post-punk and Britpop with a smidgen of new wave angst thrown in, London-based four-piece Desperate Journalist are one of the most exciting bands to emerge from the capital's underground scene this past year. Frontwoman and main mouthpiece Jo Bevan also happens to be an idol in waiting, an energetically captivating bundle of joy whose mesmerising performances undoubtedly form the catalyst of her band's live show. Ignore at your peril.

London trio Fever Dream have been dazzling us with their reverb-tinged, distortion-fuelled melodic haze for the past couple of years. Having recently signed to highly revered independent Club AC30, they put out long-awaited debut Moyamoya in April. With expectations duly met if not surpassed, their opening set on Friday evening should provide an incendiary introduction to the weekend's festivities.

Having formed influential experimental outfit Stereolab in 1990, Laetitia Sadier should need little by way of introduction. After Stereolab embarked on an indefinite hiatus in 2009, Sadier launched a solo career of her own. Debut album The Trip came out in 2010 to a host of positive reviews from fans and critics alike, while her third and most recent long player released last year, Something Shines continues in a similar vein, heralding its creator as one of the most innovative and distinctive voices in her respective field.

Hailing from Asturias in the north of Spain, Los Bonsáis have released one of this year's finest EPs in the shape of ten-song mini-album Nordeste. Channeling the spirit of Lazy-era My Bloody Valentine and Swedish noise pop acts The Radio Dept. and The Legends, it's a sprightly collection that bodes well for their early afternoon show here, their first at Indietracks. Currently signed to Elefant Records, the duo - Helena and Nel - also promise to play a specially arranged cover of a well-known song by a British cult band during their set. We can't wait to hear what they have in store!

London-based noisepop trio The Ethical Debating Society have been plying their wares for a good six years. However, it's taken them until now to release their long-awaited debut album New Sense. Nevertheless, it was well worth the wait, drawing comparisons with the likes of Comet Gain, Huggy Bear and Nation Of Ulysses among others. Arguably the most politically charged band on the line-up, their early evening set on the Church Stage bears all the hallmarks of being one of those "I was there" moments. Get there early to avoid disappointment.

Indietracks always pulls a resurgent blast from the past out of the hat, and this year's no exception. Formed in 1986, The Darling Buds went on to enjoy bonafide chart success and even appeared on Top Of The Pops in 1988 performing 'Hit The Ground', their biggest selling UK single. Having initially split in 1993, lead singer and founder member Andrea Lewis revived the band in 2010 and they've been gigging occasionally ever since. Expect a trip down memory lane and more besides.

The brainchild of musician-cum-producer Ian Parton, The Go! Team have been cross pollinating genres for a decade-and-a-half now. Perhaps best known for 2004's Mercury Music Prize nominated debut Thunder, Lightning, Strike, which fused kitsch electronica and hip hop beats with elements of noise rock and indiepop, they've since gone on to record three more albums including this year's The Scene Between. With live shows very few and far between these days, we're expecting them to pull out all the stops as they wrap up the weekend's festivities on their Sunday headlining slot.

Returning for their second headline appearance at Indietracks having previously topped the bill in 2010, The Pains Of Being Pure At Heart are a welcome addition to this year's already mouthwatering line-up. Founder member Kip Berman has earned a reputation as a songwriter of epic distinction, evidently highlighted by last year's excellent third LP Days Of Abandon. Expect a set packed with highlights from the band's extensive back catalogue and maybe a few surprises too. Come Saturday indeed...

Glaswegian outfit Tuff Love raised a few eyebrows when they were announced as the main support act on Creation Records stalwarts Ride's comeback tour in May. However, anyone that witnessed their dynamic opening slots were left in little doubt at their ability to shine on the biggest of stages. Which is no mean feat for a band who only put out their first record just over a year ago. Essentially the baby of core members Julie Eisenstein and Suse Bear, their sun drenched harmonies and simplistic melodies tied together by a lo-fi hail of fuzz and distortion remind us of Teenage Fanclub or The Shop Assistants at their most effervescent.

The full schedule and daily running orders can be found here.

For more information on Indietracks visit the official website.

In Photos: The Strokes @ British Summ...