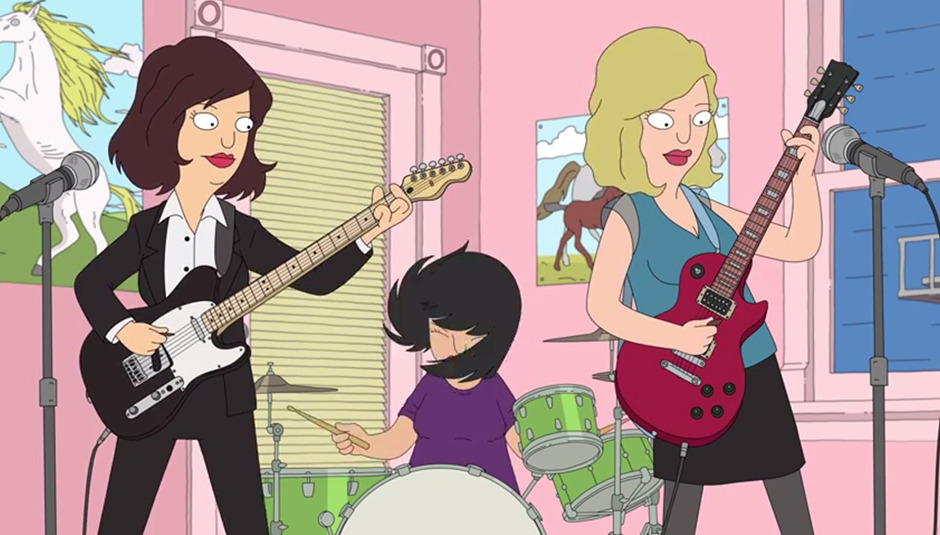 That means you'll find my favourite tunes to be released this year in one handy list below. Now there's been a lot of amazing music released over the past six months, but you might be wondering who finished on top of this list. Could it be Skepta, Carly Rae Jepsen or Viet Cong?

Read on to find out. You know it makes sense.

You can also listen to these picks on AppleMusic, YouTube, RDIO, and Spotify.

Burning For No One (Red Music)

The day The Cribs release a shit single is the day hell freezes over, England win a World Cup and Greece repays its debts with a minimum of fuss.

“Eggs, bacon, grits. You better use a condom if you taking that.”

By the end of the year, someone will have a drunken tattoo of these lyrics. And do you know what? They’ll have done 2015 right.

‘Deadwater’ is a power-ballad for people who adore The xx and quinoa salads, it’s slightly pretentious and ever so moreish. Be careful though, Kelly Zutrau’s aching falsetto has the power to swoon you into a lovelorn coma. ‘Deadwater’ is all about the slowburn trauma.

Forget everything you thought you knew about Spector. Put those opinions in a trash compactor and shoot them to the moon. Fred Macpherson’s lot are back and they are spectacular.

No one wants to date an arsehole but, when it comes to erudite indie-folk, you almost wish the worst for them. How else will the world be festooned with gloriously scabrous kiss-offs like ‘Harvard’? Surely some San Francisco coder can read this and make a dating app: ‘Tinder for great lyricists and terrible people’.

I like ‘1 2 3 4’ so much that I check iTunes on a weekly basis to see whether I can pay actual money for it. That’s how highly I value Samantha Urbani’s debut single. It’s worth about as much to me as a roll of Fruit Pastilles.

There’s not much to ‘Shutdown’, just one killer hook, a Drake Vine sample and Skepta’s irresistible bravado. Bosh these ingredients together and you have grime’s latest, greatest breakout hit.

Alright, hands up. Who hasn’t bawled along to this?

Liars! Every one of you.

What Went Down (Warner Music)

If ‘What Went Down’ tells us anything then it’s that Foals have now completed their transition from waif-like art students to full on rockstars. The O2 Arena beckons. See you there?

Despite its bleak philosophising, this four-minute offering of raucous noise is never anything less than a joy to behold

The time is now for Lorely Rodriguez. Having been kicking around since 2013, she’s transformed from a dream-pop Lana Del Rey to something else entirely. ‘Water Water’ is the first single from Empress Of’s debut album that’s due out soon on XL and it’s a banger of highest order. Press play and prepare to flail your arms in wonder

Without You (True Panther Sounds)

Tobias Jesso Jr is the kind of guy who makes ex-boyfriends everywhere look absolutely terrible. When we get dumped, we’ll usually get drunk a lot and rewatch Die Hard on loop. Jesso Jr, on the other hand, wrote a series of achingly heartfelt piano tributes to his former beau. The bastard.

Claire Boucher’s has a new album due out in October and ‘Realiti’ won’t be on it. Either this is the greatest act of folly since the citizens of Troy thought a gigantic wooden horse is a totally normal thing to turn up on your doorstep, or it’s a ballsy statement of intent from someone with several hits to spare. I know which option my money’s on.

Like Warpaint and The Libertines, Sleater-Kinney are as much of a gang as they are a band. While the Washington trio don’t care much for Oscar Wilde or extended jam sequences, ‘A New Wave’ showcases their own kind of call to arms. ‘Why conform when you can kick ass with your friends instead?’ asks this anthemic single from No Cities to Love.

If Carrie Brownstein’s ferocious riffing doesn’t have you convinced from the off, a chorus worthy of Big Star will do the trick.

Despite their joblessness and threadbare bank accounts, The Persuasions promised love would conquer all to deliver good times 1972. Now, 43 years, Young Thug has pledged the same very same thing with a little help from Jamie xx. “I'ma ride in that pussy like a stroller,” he says to the world’s poor and destitute. And they say romance is dead.

Petition to make “safe like a rubber” the official tagline for 0% yoghurt, flat-pack Ikea furniture and every new Mumford & Sons album.

A friend in need is a friend indeed, and ‘Chinatown’ is the kind of song to pick you up from the gutter, put a cuppa in your hand and wrap you up in the biggest of bear hugs.

Anyone who’s suffered ‘new rave’ or Bloc Party since Silent Alarm will know that dance songs written by indie bands are almost uniformly terrible. Mercifully, Everything Everything have been sticking their bawdy fingers up to musical convention since 2007. Long may they continue to do so.

What more can anyone say about Kendrick Lamar? "Black man taking no losses." That'll do for now.

Do you dream of a playlist containing all the best songs of 2015 so far? Well, what a coincidence we have here. Not only does the Spotify jamboree below contain all the songs featured so far this year in DiS Does Singles, it’s also been updated with Drowned In Sound’s staff favourites. What a treat!

"Mission of Burma is the pivot of my ...