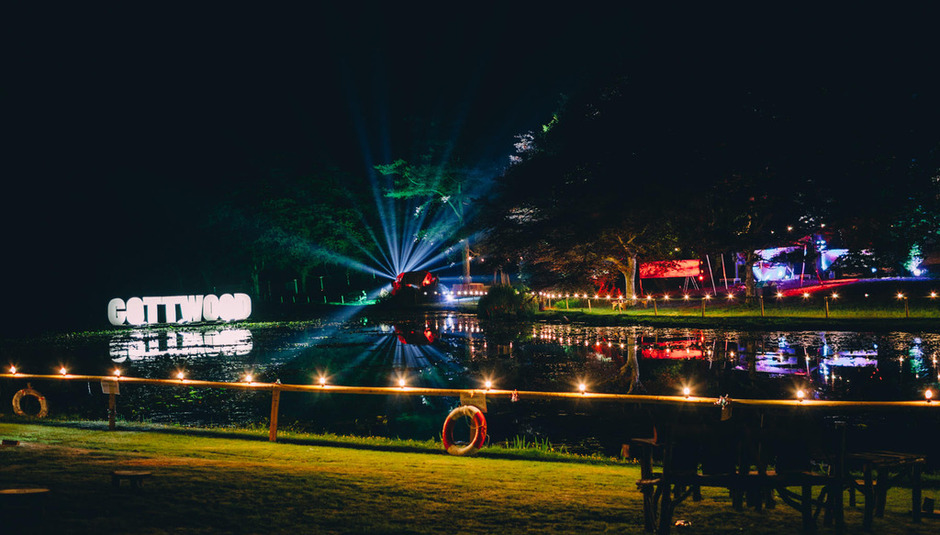 I’ve tried to describe the Gottwood main arena before, but not much can prepare you for the first time you wander into it, when it’s full to the brim with happy people and all lit up. Rather than the usual open field, or series of generic tents, it’s a narrow path, winding through the forest. There are stages and stalls to distract you at every turn. Later on, as night falls and things start to get more surreal, the lighting and atmosphere brings to mind the benign forests you find in children’s fantasy novels - filled with sprites and fairies and all kinds of unknown magic.

At most festivals wandering around can be a bit of a chore, but it’s different at Gottwood. The festival team have perfected the art of making the journey as exciting as the destination: all of the site is built by craftsmen using materials found in the forest, there's live art being made everywhere you look, whilst the gorgeous outward journey along the winding North Wales Highway might well be more stroke of good fortune than clever design, but also happens to be the perfect, meandering bookend to an idyllic four days of music, art and loafing around in the woods.

The festival’s other greatest strength is the loyalty it seems to inspire in the people who attend. A large portion of the fans are regulars, coming back year after year - but so are the DJs, the labels, and even the food stalls (which range from crab burgers to mac n cheese to delicious wood fried pizza). Move D has played almost every year to date, and Margaret Dygas returns this year for her second in a row, alongside some heavyweight repeat offenders including Marco Zenker, Craig Richards and the Futureboogie crew.

All of the music is handled in this unconventional fashion - with little regard for trends or buzz - mostly arranged by label, and with no clear hierarchy of stages. This means that you can go to see a ‘big’ name like the Zenker Brothers or Tom Demac, and willingly get sucked in to the masterful Hypercolour takeover for the entirety of Friday night - or you can, by chance, catch Sounds of the Universe, a London record store based in Soho, treat the Lake stage to a show of eclectic world music on a glorious Saturday afternoon.

It also means that the music generally suits the stage it’s placed on. The only indoor stage - The Barn - plays host to the majority of DnB and grime over the weekend, whilst the Walled Garden, with its red lights, and dark, packed tent, is often the scene for some of the more intense sets (including a tour de force from Ben UFO and Craig Richards on Sunday night). You can easily get drawn to favourite stages and sounds on a whim, or as you overhear something on (yet another) leisurely stroll through the woods. For fans of electronic music there really is an embarrassment of riches.

However, that’s not to say everything’s perfect on Anglesey. Decent toilets are a rarity in 2015. And then there’s Gottwood’s biggest, most glaring fault - the lacklustre sound quality after 11 o’clock. Because no sound bleed from the festival is allowed to reach its nearest neighbours after this time, the volume drops, playing havoc with Leon Vynehall on Friday night, and Motor City Drum Ensemble on Sunday. I hear plenty of griping over sound volume throughout the course of the weekend, and even UK hip hop collective Mouse Outfit - who play during the early evening on Sunday - sound tinny and indecipherable for large portions of their otherwise energetic set.

That being said, this is a festival which, on the whole, does so many of the really important things right. Almost everyone I speak to over the course of the weekend is wildly in love with it, and the Gottwood team are refreshingly committed to making the whole event as outright enjoyable as possible. In a market that’s filled with brand-oriented ‘festival experiences’, Gottwood stands out for its impressive creative values, inspired programming and totally undiluted escapism.