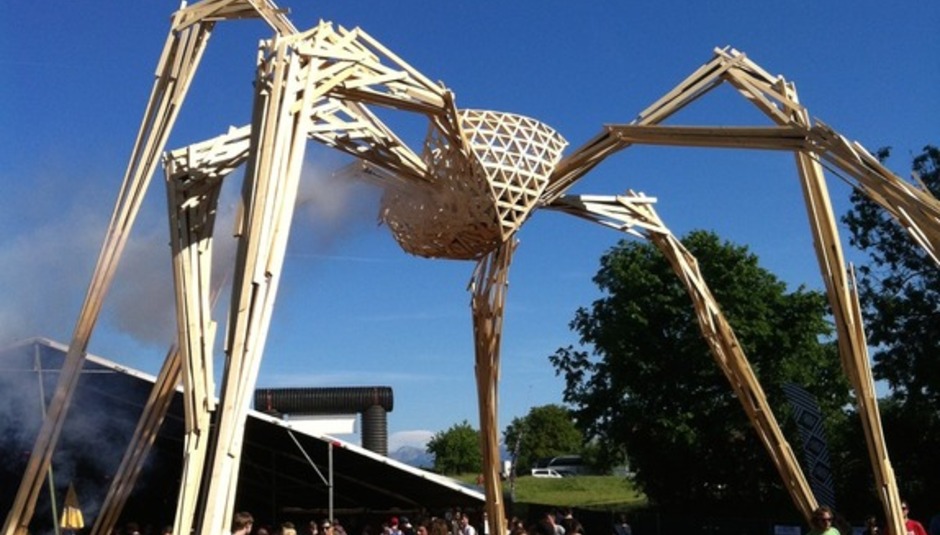 Where the hell is Bad Bonn? And other questions answered at Switzerland’s coolest festival

Where the hell is Bad Bonn? And other questions answered at Switzerland’s coolest festival

Montreux Jazz aside, Switzerland probably isn’t the first place that springs to mind when you think of music festivals. Which is somewhat unfair when you consider that Bad Bonn Kilbi has been bringing artists from across the indie-rock spectrum and beyond to the heart of the Swiss countryside for 25 years. I took it upon myself to investigate this phenomenon - and here’s what I learned.

Where the hell is Bad Bonn?

Bad Bonn - the venue that Kilbi is based around each year - is a little off the beaten track. This fact is clearly recognised by the venue itself, which liberally uses the tagline 'Where the hell is Bad Bonn?' But to answer the question, Bad Bonn is in a town called Düdingen, which is situated between the Swiss capital of Bern and the town of Fribourg. But even that’s not quite accurate, for you’ll need to take a 15-minute-walk from Düdingen station into the Swiss countryside to find Bad Bonn itself. And honestly, this seems like as good a way as any to pre-emptively avoid the persistent threat of noise complaints that plagues small venues these days - Bad Bonn is far enough away from town to avoid complaints from residents, and screened by enough trees to avoid disturbing the occupants of the chateaus across the nearby lake. As for the festival setup, the venue itself acts as the smallest stage, with two stages set up within close proximity - ensuring that there’s no need to run around in order to catch the bands you want to see. Sure, it’s a bit of a trek to get there, but the pedigree of both the venue and the festival makes it worth the journey.

Where the hell is the most interesting music coming from?

Aside from the usual raft of US/UK artists, Kilbi seems to go out of its way to include an eclectic selection of music from around the world. Sometimes, this isn’t the most appealing prospect, as is the case with Inuit throat-singer Tanya Tagaq. The sheer depth and power of her voice is impressive - I can still hear it while wandering down by the lake - but her performance does call to mind the worrying image of Bat for Lashes having an exorcism. Not to worry though, as there are plenty of other artists vying to introduce the crowd to their country’s music.

Ethiopian Jazz veteran Hailu Mergia’s virtuoso keyboard-playing makes it baffling to know that he spent 20 years working as a taxi driver in Washington before his music was re-discovered. Malian blues singer Noura Mint Seymali and her band engage the crowd so effortlessly that they’ll happily sing along, call-and-response style, in a language they mostly likely don’t understand. But perhaps the best discovery of the festival are DakhaBrakha, a Ukranian group who whip up a compelling storm with little more than percussion, chanted vocal harmonies and a judiciously used cello. An honourable mention should go to Belgium’s Robbing Millions. While not ‘world music’ per say, they do their country proud by crafting sunshine pop with smarts - somewhat like Foals stumbling out of the Spanish Sahara onto an inviting sandy beach.

What the hell does the Swiss music scene sound like?

Not only does Bad Bonn Kilbi invite talent from all over the globe to play at the festival, it also picks out some of the most interesting acts from Switzerland’s own music scene, and there are a couple in particular who are worthy of praise. Firstly, Klaus Johann Grobe impress with their three-piece setup, with keys, bass and drums being spun out into engaging fusion of kraut/jazz/surf/pysch-rock jams. Secondly, while Orchestre Tout Puissant Marcel Duchamp may have a name that’s difficult to remember, their music is far more memorable - despite initially appearing to be a little twee, their sound is more of a mix of krautrock, jazz, and tropical sounds with a dash of punk energy. All of this is conjured up using a mixture of instruments that probably shouldn’t make any sense (violin, trombone, guitar, marimba, double bass, drums & vocals), but somehow gels together into one of the most infectious highlights of the festival.

Why the hell don’t more bands try to sound like The National?

Now, it may seem harsh to jump to the conclusion that a band is actively trying to sound like another band, but when you wear your influences on your sleeve as much as The Slow Show do, it’s difficult to avoid making comparisons. In truth though, frontman Rob Goodwin’s voice is actually as reminiscent of Tom Smith as it is of Matt Berninger - but more importantly, his lyrics don’t quite captivate the mind as much as Berninger’s do. Let’s be fair though, it’s not as if their songs are a series of like-for-like duplicates - it’s more that The Slow Show are striving for the same sense of grandeur that The National make sound so effortless. And therein lies the answer to the initial question - it’s actually way more difficult than it looks to emulate a band like The National, never mind trying to put your own stamp on that sound.

How the hell do we tell when repetition is a good thing?

One of the major hypocrisies of music criticism is the ability to dismiss one artist as 'samey' or 'repetitive' before turning around and praising another for their repetition. Fortunately, I was given plenty of chance to reflect on this concept over the course of the festival. Nils Frahm presents the kind of mesmerising electro-classical monoliths that make me wish I had even a fraction of his talent, while Bo Ningen’s final song sees them construct a skyscraper out of noise-rock before tearing it down in slow-motion. Thee Oh Sees present a novel spin on the idea, underpinning their garage-rock squall with two drummers playing exactly the same beat in flawless synchronicity, and Viet Cong’s surprisingly bright guitar tones eventually spiral into a darker, more intense form. Even the festival’s court jester Mac Demarco gets in on the act with a sprawling, goofy jam that’s essentially a parody of Steely Dan’s ‘Reelin’ In The Years’. So why praise these bands when dismissing others are boring? Simply put, repetition is a good thing when you can lose yourself in it - something that all the aforementioned artists are keenly aware of.

Who the hell are Sonic Youth?

Thurston Moore is another man who knows a thing about repetition, as evidenced by his headline spot on the closing day of the festival. Having well and truly left the acrimonious break-up of Sonic Youth behind him, don’t expect him to break out ‘Teen Age Riot’ or anything along those lines - instead, he’s got deafeningly loud slabs of noise-rock on his side. It’s clear that the crowd respects that, given their warm reaction to Moore’s extended jams, and Moore responds in kind. 'We know where Bad Bonn is now,' he proclaims during the band’s encore, 'it’s in our hearts.'