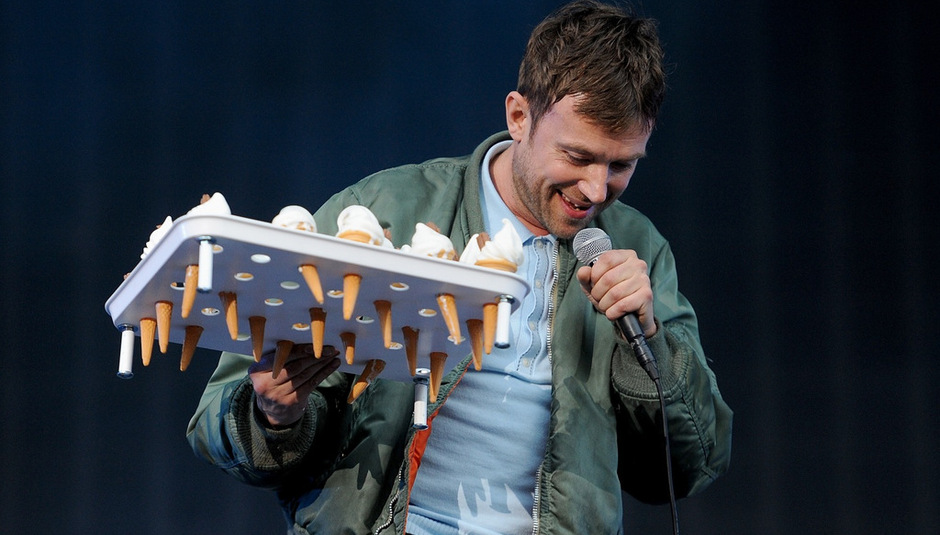 ‘I reckon they’re going to play all of The Magic Whip’ venues one of two confusingly young Blur fans on my train to Victoria.

I suspect the lad is wrong, but it’s true the band have some form in this respect. I seem to dimly remember either Melody Maker or NME being horrified at their 1998 Glastonbury set, which contained eight songs off Blur and no ‘Country House’, a gesture which – at the time – was viewed as some sort of insult to the honest British public that had bought the single in such numbers. I also seem to recall that the disgruntled hack signed off by inaccurately saying that Blur would never be invited to headline Glastonbury again. But of course, when they did, in 2009, they didn’t actually have an album to promote, and broke out ‘Country House’ with rueful good cheer, so I suppose said hack may feel it's a score draw.

Still, Blur do not play live very often now and it would take some serious gall to headline this British Summertime in Hyde Park gig with a full-on Magic Whip plug, and the truth is that they don’t even come close to that. In fact, it’s 1994’s Parklife that actually comes out of the night best represented, seven to The Magic Whip’s five. (There’s no ‘Country House’, mind)

Why am I banging on about this? Well, I suppose if I have any small ambivalence about another wonderful gig that illustrates Blur’s actual bona fide greatness – whatever your feelings about The Great Escape, it is in retrospect baffling that their 1993-1999 run of form was viewed as anything other than peerless – it’s just the awareness that Blur are now a band for whom live shows and new records are increasingly divorced from each other. And when to all intents and purposes Hyde Park looks likely to be the sole opportunity for most British fans to see the band this year, it’s funny to think we’re locked out of the possibility of hearing much of an album that’s gone down so well.

Am I grumbling that they didn’t fill their set with obscure new album tracks? No, just maybe mumblingly working out a a certain wistfulness at the fact that there will be no formal Magic Whip tour, just festival dates and warm-ups.

Still, any sense whatsoever that the band have become sort of posse of dried up old dinosaurs is dispelled not only by the fact none of them seem to have aged (it’s worth noting that Dave looked 51 to begin with), but the endearingly mad/crap innovation of having an actual functioning Magic Whip ice cream van on stage. It’d come across as a bit Spinal Tap except for the fact it’s hard to make an ice cream van look pompous, especially when the singer is blearily handing out mushy cones to a rapturous front row.

And the new album is hardly kept locked up like a mad aunt: the band walk on and smack straight into ‘Go Out’ like prize fighters, Damon striding around like he’s going to have all of us in a fight, Graham firing out those extraordinary, scything guitar lines like he’s channeling the ghost of Keith Levene. Boisterous rampages through ‘Lonesome Street’, ‘I Broadcast’ and ‘Ong Ong’ follow in reasonably short order, and stunning, spacey centrepiece ‘Thought I Was A Spaceman’ – with its namecheck for “Hyde Park” – is suitably awesome, a titanic pause in a banger-heavy night.

I guess what really makes Blur so magical is a blend of honest-to-god chemistry and enthusiasm – it’s important, somehow, that they still look like an indie band, not a rock one – and an awareness as to the scale and diversity of their own back catalogue. Something gets played from every album, and it all fits together marvellously: a band that can go from the ominous groove of ‘Trimm Trabb’ to the spiky oddity ‘He Thought of Cars’ and the expansive, wistful pop of ‘End of a Century’ in three songs – and can get away with it in front of 50,000 people – is a band that truly knows their shit.

I probably I want to have my cone and eat it: I’d like a Magic Whip tour, but if they’re not going to do that then this gig probably is too precious a thing to devote to promoting a record. It’s not about an album, or business as usual, it’s a celebration of 20-plus years of astonishing music. As the band close out with their traditional, sublime post-reformation one-two of ‘For Tomorrow’ and ‘The Universal’, it seems hard to believe that they won’t be here forever, playing these wonderful songs until the end of time.