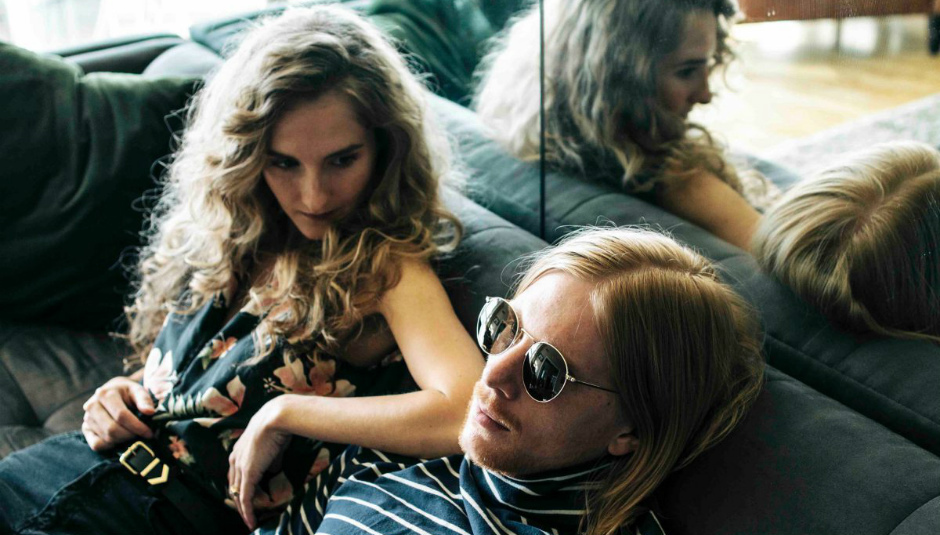 "I was thinking of Carole King" - DiS meets Tennis

"I was thinking of Carole King" - DiS meets Tennis

Back in 2010, you might not have thought Tennis would have a third album in them. Their bright eyed, bushy tailed surf-pop debut – written during (and about) an extended boat trip taken by wife and husband Alana and Patrick – could have been dismissed as a gimmicky vanity project. Something to enjoy for the summer maybe, but a record which would ebb out in the tide of blog hype.

Happily, the songs were far too good for that. And so here we are two albums and an EP later, talking about their most mature offering yet: the sparse, sleek Ritual In Repeat.

One of the most immediately striking aspects of Tennis' evolving sound is how clean and spacious it is in comparison to their early work. The change is deliberate. "Honestly, you can hide behind a lot with distortion and reverb", explains Patrick. "It's very forgiving. It takes up a lot of space. It can mask a lot of imperfections".

"This time we wanted the challenge of a tighter 70s production. If we were to use those old production techniques it would have felt like treading water"

The result is a record which sounds more open, yet packed with more ideas and flourishes. It's the continuation of a general trend of change, driven by Alana's increasing involvement in the creative process.

"The first couple of albums, I felt I was holding the reins on our band", Patrick says. "I wrote most of the songs and influenced the shape of them. This was the first set where we worked together. [Alana is] more than equal on writing the music to this album, and allowed [Alana] to shape the songs around [her] lyrics more than ever"

On Ritual In Repeat, the songs have moved away from the diary entries of their debut, and are often sung from the fictionalised perspective of others.

"There's definitely an element of self-preservation after writing such an autobiographical, naïve, sublimely innocent first record", Alana explains. "After that, it feels right and better to write about other women".

"It felt really good to move through other people's voices, and practice empathy. It's easy to be – and necessary to be – narcissistic when you're an artist of any sort. You have to think that your shit is worth hearing. But it's a good exercise in temperance to think about other people's lives and their experiences, not just your own"

As wonderful as it is to hear the results of Alana's experiments in empathy, it's a shame to hear a note of defensiveness among her motivations for choosing this lyrical mode – that desire for "self-preservation".

Alana's reluctance to be too open about her own experiences was shaped by pejorative references to her status as a married woman from journalists in early reviews.

"I feel perplexed", she admits. "Maybe I should deny myself every stereotypically womanly experience in an effort to prove my feminism and my commitment to equality? Or maybe that's just this masochistic urge I should not give into. Especially being in a public sphere where everything I do personally gets turned outward, it's really confusing."

The confusion spills into the writing style on Ritual In Repeat. It's an exploration of female identity, and how she "doesn't really know what that is". The more of herself she puts into these songs, the more of herself she takes away too. Just look at the album cover: A faceless portrait in which she has both literally erased herself, and provides a proxy for every woman; the characters in her songs.

"I'm not going to have my own marriage and life experiences twisted and thrown back in my face", she tells me. "That won't happen anymore because I'm not writing about myself so much, or I'm doing so in such a vague way that no-one can tell".

Although clearly devoted to one another (they speak as much to each other during this interview, as much as they do directly to me), marriage doesn't seem to mean much to Alana and Patrick in and of itself. They admit they mainly did it because they were "exhausted" over having to explain their unmarried situation as life partners again and again. They did it quietly, and don't have rings. Instead they have matching tattoos of sheep (for Patrick, because it is his spirit animal; for Alana, because she kind of looks like a sheep).

Beyond her concerns of how she projects herself as a woman and a wife, Alana gives a stronger impression of choosing to write through the voices of others because it provides a unique sense of self-definition, as well as self-effacement.

"They weren't just writing exercises", she asserts. "They were connected moments which were almost as personal as my private life"

"I can't channel my own voice because I don't know what it is", she goes onto admit. "So I imagine, what if someone else was singing to this chord progression? What would I hear?"

So, who do you think Alana was thinking of when she wrote killer single ‘I'm Callin'? Chic and sexy with a shimmering Eighties sheen, Madonna was my best guess. "I was thinking of Carole King", she reveals, half triumphant that I was so far off the mark. "And that's how I feel comforted in thinking that I do have a voice".

"Obviously I have one if I'm trying Carol King and people hear Madonna. I must be putting my own colour on it. And that makes me confident – there's some element of myself coming through. It's not just mimicry"

After all of this talk of the retreat into other personas, it's surprising to hear that Alana and Patrick are thinking of moving back into autobiographically driven song writing for their next record, and are even planning another boat trip to inspire it.

"It's inherently existential", Alana says about sailing, and their next record. "It's a jarring experience – we're safe, but your life is precarious. Every time you look over the side of your boat, it's miles deep of death. That balance of safety and infinite nothingness makes you very reflective and creative"

For Alana, the modes of autobiography and fiction flow from the same creative source: personal explorations of womanhood. On Ritual In Repeat, she looks at the world through the eyes and voices of others. Their next record might be more explicitly personal again. The drift between these poles will be worth following over the records to come, as Alana and Patrick project, reflect and mask themselves in interesting new ways.