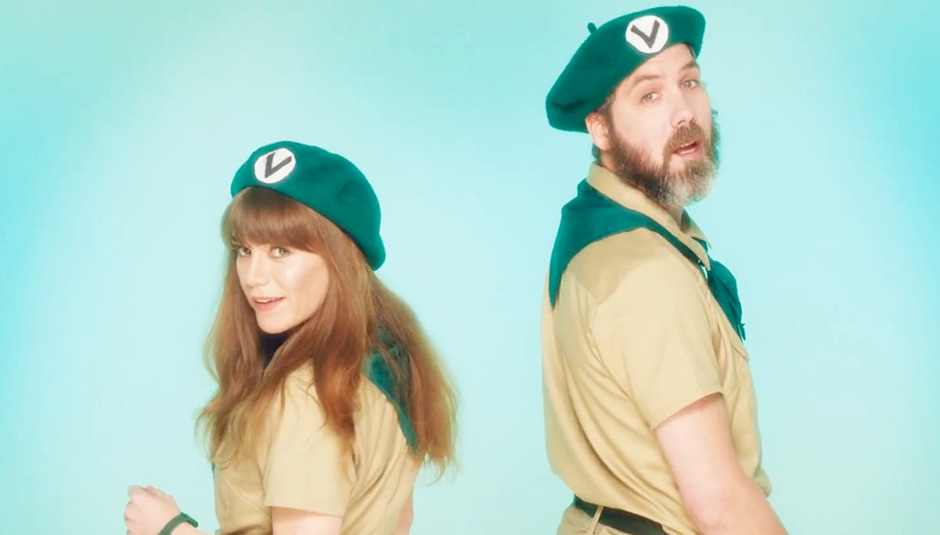 Hello. It’s 2015 and Will Young has a Number 1 album in the UK charts. Fear not The Vaccines, there’s always next time.

In better news, a veritable feast of great new music was unleashed upon the world last week. You’ll find eight choice cuts below, including Jenny Lewis’ ‘She’s Not Me’. I’ve been obsessed with that one since forever.

She’s Not Me (Warner Music)

It's 'summer jam' season. The time of year when any song with a half-decent chorus is declared to be the soundtrack to your sun-soaked shenanigans.

Anyway, if you want to don a pair of shades and pour one out while listening to Jenny Lewis' latest (greatest) single then go for it. That would be a fine way to spend an afternoon. 'She's Not Me' is a bittersweet break up song with an upbeat surface and a self-loathing core. There's more to it than radio-friendly melody, but stick it on at Sunday's BBQ and your mum will no doubt hum along.

"But she's not me," Lewis sings of her ex-boyfriend's new beau. "She's easy."

Some folk have said this line amounts to 'slut shaming'. I'm not so sure. The Voyager's best song says a lot about how tempting it is to end a relationship while feeling like the injured party. "I used to think you could save me," confesses Lewis at the track's opening, before going on to recall how she ballsed things up. "Remember the night I destroyed it all/When I told you I cheated/And you punched through the drywall." Who’s to blame for this sordid mess? A scurrilous third party, of course.

This neat contradiction means ‘She’s Not Me’ is whatever you want to make of it. An easy listening t-shirt weather essential or comfort food for feckless romantics. Whatever the season, it’s sure to warm your soul.

Donnie Trumpet & The Social Experiment are essentially Chance The Rapper’s live band. That means although the Chicago-born MC is all over their debut album/mixtape, Surf, it technically isn’t a follow up to the phenomenal Acid Rap. On first listen at least, it’s still stuffed full of feelgood neo-jazz vibrations.

‘Go’ sees Chance completely cede the limelight to two of his city’s up and comers: Mike Golden and Joey Purp. It’s a joyous pairing with neither the silver-tongued singer or laconic rapper inclined to let their opportunity slip. Golden’s effervescent crooning hits you like a vitamin C OD, while Purp’s infectious ‘Gold Digger’ drawl offers a beguiling point of contrast - even if what he’s saying is a new riff on a tired theme.

‘Holding On’ belongs to the ‘If it ain’t broke, don’t fix it’ school of comeback singles. Those firecracker drums, echo chamber vocals and breezy house synth sounds all stay true to the template established in 2013’s Settle. In fairness, that was one hell of an album - so you can hardly blame the Lawrence brothers for staying true to its immensely popular aesthetic.

This time Gregory Porter takes the ‘featured artist you probably haven’t heard of’ slot and gives it plenty of welly. “But it's holding on/And it's holding strong,” he hollers in suitably OTT fashion. Good on yer, son.

One of the problems I’ve always had with The xx is how meticulous their songs are. I’ll admire them from afar without truly taking them to heart.

That couldn’t be less of the case with ‘I Know There’s Gonnna Be (Good Times)’. It’s a great big bear hug of a single whose only concern is being the life and soul of the party. You don’t sample The Persuasions without delivering on that promise.

I like Girlpool and their last gang in town ethos. Even when Cleo Tucker and Harmony Tividad teeter on the edge of atonal, their boundless reserves of charisma are enough to keep you onside.

‘Cherry Picking’ takes a run of the mill stream of 3am anxiety and repackages it as something to be proud of. It’s not as pretty as ‘Chinatown’, but that’s kind of the point. Self-esteem is a fragile thing, so why not make a virtue of your dog-eared approach to songwriting and sing that chorus extra loud. If you tumble out of tune then that's everyone else’s problem.

Now is the time to get familiar with Sam Bruno’s ‘Search Party’. As the single attached to the forthcoming Cara Delevingne-featuring Paper Towns, its lyrics are sure to be scrawled over every self-respecting teen’s journal come July. More importantly, it’s properly ace. The kind of wide-eyed pop song that makes you want to conquer the world or make a really great spreadsheet at work.

Heroine (Got Nothing On You) (Bandcamp)

“Eggs, bacon, grits/You better use a condom if you taking that.”

"I was thinking of Carole King"

DiS meets PINS: "Everyone wants their...