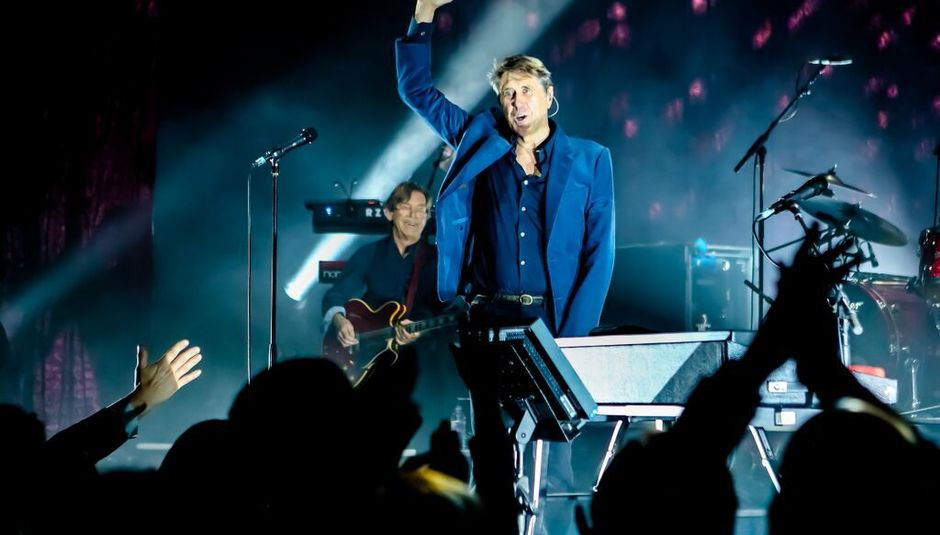 It was exactly half a century ago that someone sang "I hope I die before I get old" . An apotheosis of its time perhaps, but thankfully one Bryan Ferry didn't adhere to. Having been at the forefront of cutting edge music for 45 years himself, initially as the vocalist and main songwriter with Roxy Music while simultaneously releasing a cavalcade of solo material, with his seventieth birthday fast approaching (26th September for anyone wishing to post him a card), he's still capable of turning in the most gracefully exquisite performances artists half his age can only dream of. What's even more remarkable is that he doesn't look a day older than the man whose face adorned many a teenage girl's wall in the 70s and early 80s, give or take the odd grey hair. Stylishly adorned in a suave blue tuxedo and matching slacks, this wasn't so much a throwback to another era. Instead, it was more a lesson in showmanship.

Earlier, London-based singer/songwriter Judith Owen whets the appetites for those politely seated in Sheffield City Hall's salubrious confines. Playing a selection of songs mostly garnered from her tenth and most recent album, Ebb & Flow, each delivered impeccably. Her vocal pronunciations not too dissimilar to classic songstresses like Carole King or Karen Carpenter, it's the perfect setting to showcase her talents.

Looking around the venue, one suspects many of tonight's audience would be of a similar age to this evening's headliner. Nevertheless, the rapturous applause bordering on pandemonium that greet Bryan Ferry's entrance wouldn't be out of place at a One Direction concert. Accompanied by a nine-piece band, many of whom have cut their teeth playing with numerous other reputable artists in the past (we spot former My Life Story violin player Lucy Wilkins among them), Ferry spends the next ninety minutes delivering a career-spanning set that is flawless in both content and execution.

It's probably worth mentioning that his current tour - taking in a whopping twenty cities - is to promote his fourteenth and latest solo record Avonmore. Released last year to various degrees of critical acclaim whilst achieving a Top 20 placing in the albums chart to boot, it also arguably represents his finest body of original work this century. A point accentuated by the dual opening gambit of the title track and 'Driving Me Wild', the newer material feels at home alongside some of his more familiar works, something which becomes apparent when the stage set changes to reveal a glitterball during the more uptempo 'One Night Stand' and 'Midnight Train' later on in the show.

Elsewhere, his now customary covers section includes an outing for the obscure 'Bob Dylan's Dream', released in 2012 as part of an Amnesty International compilation and another Dylan classic, 'Don't Think Twice, It's Alright'. The stripped down mood continues for 'Smoke Gets In Your Eyes', Ferry's cover of the 1930s Broadway show tune first released back in 1974 as part of the Another Time, Another Place collection. Each taking on a new lease of life under Ferry's distinctive croon to the point where one could be forgiven for thinking each was written with him in mind.

Nevertheless, it's the hits that most of those present want to hear, and Ferry doesn't disappoint. 1985's 'Slave To Love' is dispatched early on along with 'Beauty Queen' and 'Ladytron', two choice cuts from the earlier years of Roxy Music's diminutive back catalogue. By the time 1982's 'More Than This' - also Roxy Music's last top ten 45 - introduces a segment of wall-to-wall hit singles most of the room are on their feet. 'Avalon', 'Love Is The Drug', 'Virginia Plain' and 'Do The Strand' follow suit before 'Let's Stick Together', 'Editions Of You' and 'Jealous Guy' make up the encore. Swanning elegantly across the stage from right to left, Ferry's Cheshire cat grin tells its own story. Undoubtedly flattered by the response, he returns once more for an impromptu run through 'Re-Make/Re-Model', the opening track from Roxy Music's self-titled debut. As with everything else on display tonight, it's impeccable.

Indeed it would be churlish to label tonight's performance as anything less than sensational. For although the term "legend" gets bandied about far too easily these days, there can be no other descriptive bestowed upon Bryan Ferry this evening. Greatness personified, or in other words, a masterclass in perfection.