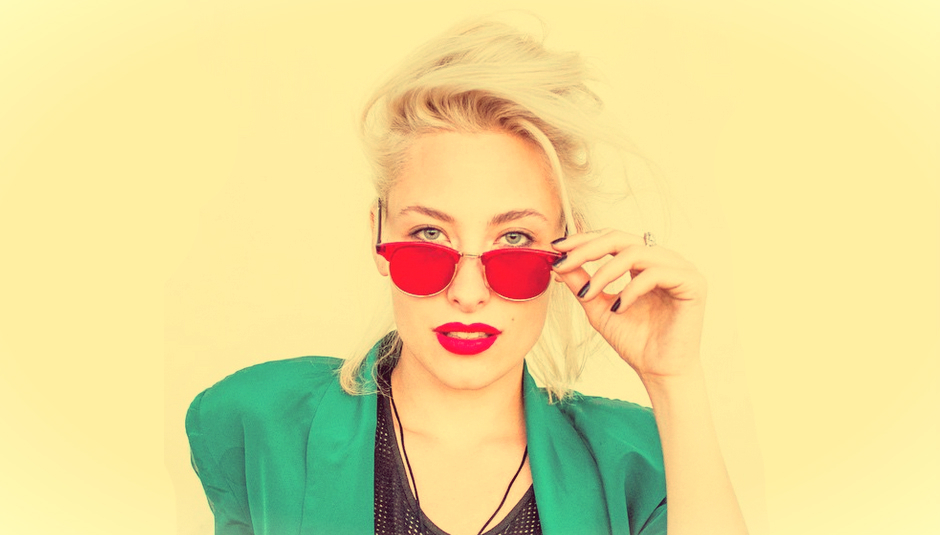 Hello. It's that time of week again. We've rounded up the best new songs from the past seven days for your listening pleasure.

Last week we heard some smashing tunes from Bully, Metz, St. Vincent and Silicon. Best of all though was '1 2 3 4' by Samantha Urbani - it's Single of the Week. Because you need to hear it as soon as possible.

It's been a while since we last heard from Samantha Urbani. Long enough to make you wonder what happened to Friends' lead singer. Would she ever come up trumps with another 'I'm His Girl' or 'Friend Crush'? The kind of sultry pop that first spun the blogosphere into a tizzy four years ago.

Since the demise of her former quintet, Urbani has been very much working on the down low. You'll might have seen her in the touring band for Dev Hynes' Blood Orange or heard her vocals on that project's Cupid Deluxe. Otherwise, '1 2 3 4' comes as a complete surprise. Not just because it exists, but also because it has an extended bongo solo and is still amazing.

A throwback track of sorts, it recalls Immaculate era Madonna with playful ease and that is a statement we do not make lightly. Every lyric is a declaration that compels your body into motion, while outrageous flecks of bass and synth further tease out an air of melodrama.

“Crucified by love, I fell in a predictable trap," sings Urbani as though we've all been there before. Heartbreak: it's a bugger.

Despite its sorrowful origins, '1 2 3 4' is never anything less than a blast. Announcing the track, Urbani tweeted: "I have 1million S.U. solo songs I've been working on." On this form, you'd settle for an album's worth.

For a song about self-doubt, 'Trying' sure ain't lacking for confidence. Leaping out of the blocks with a looping guitar solo, it pirouettes around a grungey loud-quiet dynamic before crescendoing in a righteous pique of shouted affirmation. In laying bare her worries, Alicia Bognanno strips away their significance.

"I question everything," sings Bully's frontwoman. "My focus, my figure, my sexuality."

By the time 'Trying's raucous chorus kicks in, Bognanno is wearing her scars like a badge of honour. You'll sing along and do the same.

I first met Florence Welch at the NME Awards Tour 2009. Having interviewed White Lies and subtly asked them the obligatory Joy Division soundalike question, I stepped out of their dressing room to see a redhead running along the backstage corridor at full pelt while flailing her arms around.

“That’s Florence,” explained a White Lie with a tone of voice that suggested this kind of behaviour was very much commonplace and not at all grating.

What does low grade indie gossip from six years ago have to do with ‘Ship To Wreck’, you might well ask? Not much, except the latest single from How Big How Blue How Beautiful does see Flo reign herself in a bit. It’s still got a big showy chorus with swooping high notes, but this is balanced out by a simple, plaintive guitar line and a distinct lack of grandiose strings. It’ll go down a treat at the Glastonbury sunset slot.

So here’s the thing, ‘Fucking Young’ sounds incredible. Full of lush Stevie Wonder inspired orchestration and starcrossed sentimentality, it’s the most pleasant song Tyler, The Creator has ever put his name to. Then again, it flirts around a subject that's pretty grim.

“Now me and she held hands and we danced, nothing more,” explains Tyler of a girl who’s below the legal age of consent. “She kissed my hand a couple times, FaceTime when we're bored.”

Admittedly, what Odd Future’s hellraiser-in-chief is saying isn’t completely different to Sam Cooke’s ‘Only Sixteen’. When you’re listening to a guy who once rapped, “You call this shit rape but I think that rape's fun”, it’s difficult to hear him toy with the concept again - albeit with a more moral outcome. But hey, it's just a song. Right?

2) Government statistics released in January 2013 estimated that 85,000 women are raped on average in England and Wales every year, that over 400,000 women are sexually assaulted annually, and that 1 in 5 women (aged 16 - 59) has experienced some form of sexual violence since the age of 16. via Rapecrisis.org.uk.

3) 1 in 20 children in the UK have been sexually abused. via NSPCC.org.uk

As any self-respecting millennial will know, Apple’s recent iPhone update has erased the almighty from emoji existence. There’s no official word from Charles Darwin on this triumph of technology over theology, but that’s probably because he’s feeling like a total mug right now and is busy working on his Origin of Species rewrite. In the meantime, New Zealand’s Silicon has penned a woozy tribute to the Twitter’s deity of choice and it’s at least a thousand times better than I expected after clicking open an email entitled ‘God Emoji’.

Spit You Out (Sub Pop)

‘Spit You Out’ is a properly horrible song. It’s loud, obnoxious and everything your mum warned you about when she saw you hanging with those hoodlums from the end of the road. Naturally, it is also excellent fun.

London turned New York songwriter Tamsin Wilson specialises in dense finger-picking and spacious percussion. Her songs hang together in lovelorn fog, that seeps through your headphones and into your bloodstream. ‘Garden’ is the first single from her as yet untitled debut album and, although it could pass for the new Daughter song, it remains very good indeed. The kind of track that hums out of your car radio come summertime.

“You know I never loved you more/Than when we were hiding from those sirens, sirens Oh, we laughed so hard/Threw up in your mom's azaleas”