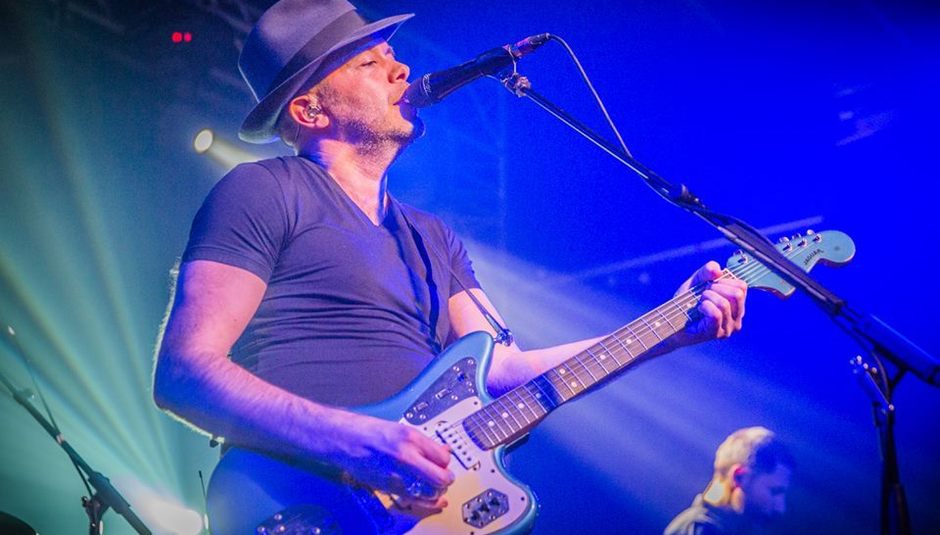 Over twenty years have passed since all four members of Ride last shared a stage together, but then time is meant to be a great healer. Which is just as well considering the fraught atmosphere surrounding the recording sessions for fourth and final album Tarantula, culminating in the band's split in 1996.

While the subsequent breakdown of dual singer/songwriters Andy Bell and Mark Gardener's relationship has been well documented, their return is something that has been mooted for a long time. In 2012, Bell hinted at the likelihood of Ride reforming during an interview with Drowned In Sound and although Gardener had initially been dismissive in an interview with the same publication three years earlier, the appetite was there. Possibly spurred on by My Bloody Valentine's return to the fold in 2008, rumours of a Ride reunion have circulated ever since and following Slowdive's remarkable comeback last year. Surely the time was right for the final piece of shoegaze's holy trinity to step out of the wilderness...

So when Gardener spoke to DiS again last November and uttered the immortal words, "Ride are reforming!", those eagerly anticipated wishes and dreams became a reality. Headline slots at this summer's Primavera and Field Day festivals were duly announced alongside a fortnight of shows in the early part of summer. Ride were back and May couldn't come soon enough.

With rumours also rife of a possible warm-up show in their home city of Oxford, last week's announcement that they'd be returning to their old stomping ground of The Zodiac - nowadays known as the O2 Academy - saw all available tickets unsurprisingly snapped up in a matter of minutes.

An hour before the doors open, Cowley Road is buzzing with excitement. Classic tracks from the band's back catalogue blast out from The Retreat's jukebox just 50 yards up the road from the venue.

Their return in this most intimate of settings has a celebratory feel about it from the moment we enter the the O2 Academy. There are 450 devoted souls - comedian Stewart Lee, esteemed producer John Leckie and members of Radiohead among them - crammed into the modestly sized upstairs room. There's a lot of excited chatter. Stories are exchanged with acquaintances both old and new, each depicting how Ride became an important part of their lives.

The atmosphere reaches fever pitch when the four members of Ride walk onto the stage. Gardener standing centre stage resplendent in his now customary trilby. Bell flanking him to his right, the master of studied cool. Over his left shoulder stands bassist Steve Queralt, still not looking a day older than the last time we set eyes on him in the mid-1990s, while powerhouse drum machine Loz Colbert limbers up behind them -- his technique a somewhat energetic cross between Keith Moon and Phil "Philthy Animal" Taylor.

Understandably, all of tonight's set bar 1996's 'Black Nite Crash' comes from the first two albums and early EPs. Providing a solid representation of the band's halcyon era and ultimately why Ride are held in such reverence today, the next hour and forty minutes are an exercise in timeless beauty.

Openers 'Polar Bear' and 'Seagull' are both early reminders of debut album Nowhere's flawless quality before 'Twisterella' highlights the band's pop sensibilities in all their effervescent glory. Tonight's setlist is a magnanimous celebration of one of the UK's most influential guitar bands in recent years. Bell and Gardener's harmonies, so distinctive to Ride's sound, resonate as though they've never spent a day apart. Colbert's crushing drum intro to 'Dreams Burn Down' causes hairs to stand solemnly on the backs of necks. When 'Taste' segues effortlessly into the opening chords of 'Vapour Trail', a couple of grown men - neither looking a day under fifty - weep openly into their sleeves. What's most striking here is how musically taut the whole thing is. Comparisons with both My Bloody Valentine's low-key ICA comeback and Slowdive's similar entree at the Village Underground last May being inevitable, it would be fair to say this was an altogether more confident performance than either.

When 'Drive Blind' closes the first part of the show by veering off into a near ten minutes "holocaust" segment on the middle eight, the smiles on the foursome's faces - Gardener's in particular - suggests they're enjoying it as much, if not more, than we are. Returning for a colossal 'Leave Them All Behind' on the first encore than delivering a rapid double whammy of 'Like A Daydream' and 'Chelsea Girl' for the second, there's a clearly a fire in their bellies that suggests they have unfinished business.

Nevertheless, tonight was an exemplary performance made even more astounding by it being Ride's first public appearance for two decades. New bands take note. The bar has been raised and this was only meant to be a warm up. Incredible from start to finish in every conceivable way.

The Maccabees, Tame Impala, The National