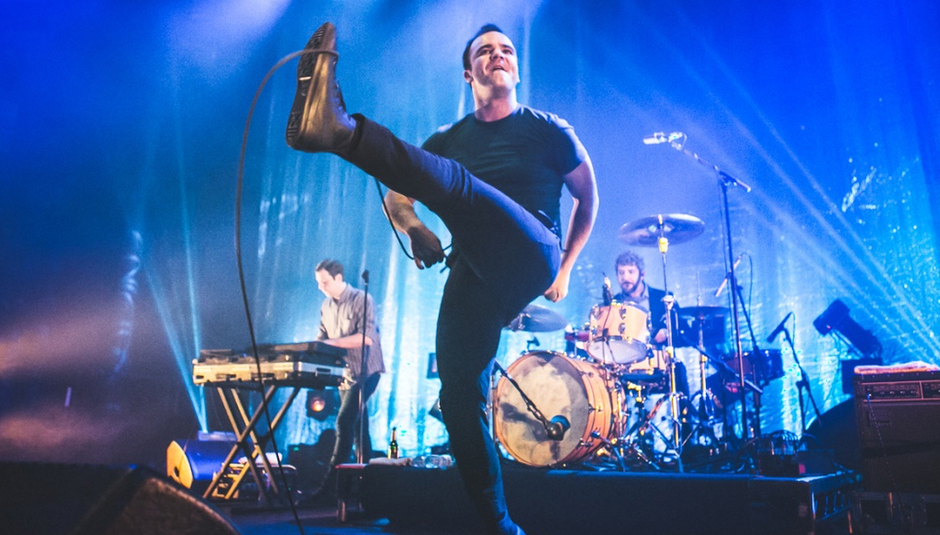 February 2012. A dark, grotty, red brick basement club on Barcelona’s Plaça Reial. A friend of mine who’s started putting on shows has booked a cult Baltimore synth-pop trio and he’s worried it won’t sell out. But his fears are misplaced; in the end, over fifty disappointed people are left standing in the chilly evening rain. Inside, having checked into the cheapest, and seediest, hotel on the square, they tinker with their instruments for a good half an hour before launching into a ferocious set that makes you fear for singer Samuel T. Herring’s vocal chords and emotional well-being. Drenched in sweat after just one song, he lurches across the stage, thumps his chest, and serenades the front row. At one point he looks close to tears. Everyone responds in kind. It’s a roller coaster ride of soul baring, and as cathartic and immersive a musical performance as I’ve ever seen. It’s my first time in the company of Future Islands, and I’m hooked.

February 2014. The Hoxton Square Bar & Kitchen. After nearly 18 months off, they’ve returned with a new album and a new label – indie powerhouse 4AD. This small tour – they also have dates in Paris and Brussels – is a pre-launch warm up for a hard year on the road, and although that Letterman performance is still three weeks away, something is building; the show sold out weeks ago, and there’s a fevered anticipation among those lucky enough to have a ticket. True to form, the band deliver; the new songs soar, the old ones gain a new urgency with live drums. Herring is just as physical, but his moves are now greeted by knowing cheers instead of wide-eyed wonder. Future Islands look content and later, as we wonder the streets looking for some late-night food, they tell me about the belief they have in these songs; I tell them their time is now. How right we all were.

March 2015. The Roundhouse. Two nights, 6,600 people. To look down on the adoring masses as the band walk on stage is to believe that dreams do come true. It’s to have faith that miles and miles on the road – winning hearts and minds one person, one gig, one city at a time – can still pay dividends in an era when the hype machine has shortened everyone’s fifteen minutes of fame to a millisecond. It is also, reading Samuel T Herring’s backstory, to believe in redemption and music’s great healing power; that through art, one can find inner peace, and they want to spread that hope as far as they can. One hand on his heart, standing atop his monitors at the front of the stage, Herring looks, just for a moment, overcome – all the raw feelings he’s poured out in his songs are being returned, ten fold – but then the lights dim, the synth kicks in, and they’re off.

The great appeal of their music lies in its universality. There’s nothing forced or fashionable about it; it’s exceptional well-crafted pop, full of joyous melodies and rich soul grooves. To my right, several teenagers are replicating Herring’s dad-dancing moves; to my left, an elderly couple over 60 are gently swaying in time, arm in arm, eyes lovingly gazing back and forth between the stage and each other. And what they are looking at is a man – and a band – in their element, born to do what they do. They play with the metronomic precision and telepathic understanding that comes from twelve years together, but with a passion that suggests they’re still trying to convince the skeptical. The sound itself is glorious; Will Cashion’s nimble bass flits around the melodies, while the drums add punch and drive everything forward. It has a richness that fills the space, and yet every detail is audible, every little flourish perfectly placed.

And at the centre of it all stands Herring, frontman supreme, who has everyone in the palm of his hand. In full flow he’s a force of nature, barrelling around the stage like a man possessed. The full range of moves are present and correct, but he’s added high kicks and some slinky hip gyrations, each one greeted by louder cheers than the last. Leaning over the pit, he reaches out, yearning to be closer to the crowd – perhaps to be in the crowd, grabbing hands, looking straight into your eyes as he bares his soul. And then there’s his voice, a deep, smooth baritone that wraps itself around your brain like a comforting velvet blanket. “Some people say I sing with my soul, but how else can you sing?” he once said, a deceptively simple question that, watching as he throws himself into his performance, has an obvious answer; there is no other way.

On the first night, they close with ‘Fall From Grace’, torch song supreme. On the second, we get ‘Little Dreamer’, a little known bittersweet ballad from their debut album, 2008’s Wave Like Home. “And as we say goodnight / I hold you close and tight” Herring croons, adding “I’ll always dream of you”. Only Future Islands could leave on a note of doomed romanticism after an hour-long pop master class and get away with it, but that’s why they’ve connected with so many; strip everything away, and you’re left with honest tales recounting the human condition, and all the hope, love and loss that entails. It’s why they’ve never given up, why they’ve always believed in themselves, and why they’re standing in front of over 3,000 people, soaking in the richly deserved adulation and applause. This may be their crowning glory, but Future Islands are just getting started.

Photo by Wunmi Onibudo. See the full gallery over on TheLineofBestFit.

Related: DiS meets Future Islands: "My Dad would always ask me when I was going to write a happy song".

Waxahatchee on The Walking Dead, Ivy ...