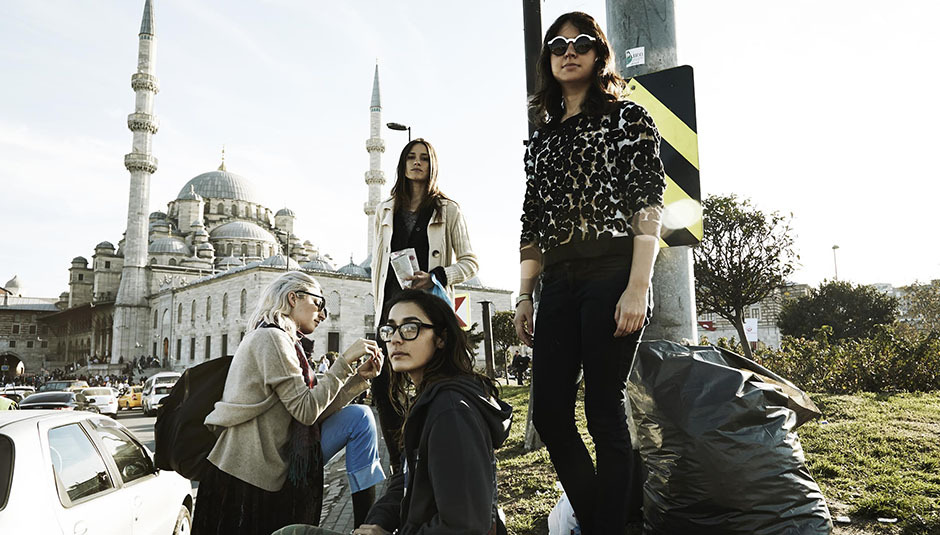 Hello and welcome to a brand new edition of DiS Does Singles. You know the drill by now: we run through the best songs of the past seven days, you ignore the words and skip straight to the music. It's fine, honest.

Anyway, Warpaint have Single of the Week with 'No Way Out (Redux)', which really is quite splendid. Then again, what else did you expect?

Elsewhere, we've got the latest tracks from Wolf Alice, Purity Ring and Carly Rae Jepsen. That's as well as new stuff from Mac McCaughan, The Bohicas and Claw The Ice.

No Way Out (Redux) (Rough Trade)

If there's one thing Warpaint excel at, it's being Warpaint. They exist in their own beguiling haze, way above the realms of hype, backlash and reinvention. You'll never read a news story proclaiming Jenny Lee Lindberg and co to have 'gone new wave' or 'back to their roots'. They're hellbent on doing them, and that's a sound worth savouring.

As with the LA quartet's best songs, 'No Way Out (Redux)' doesn't do that much - just enough to hold your rapt attention. The first of a new series of singles, it unfurls from intangible wisps of bass and percussion. The kind that leave you gurning in a state of dazed satisfaction.

Of course, Warpaint have done obsession before on 'Love Is To Die', ‘Undertow’ and ‘Billie Holiday’. They’ve even done ‘No Way Out’ already. The ‘(Redux)’ in this single’s title refers to how it's been trimmed down from a seven minute jam to something altogether more seductive. In upping the track’s tempo, it’s been lent a lithe snarl that even J. K. Simmons would approve of.

And so Warpaint slink off again into rhythmic oblivion. For as long as they're inimitable, I'll shimmy along with them.

Okay, let's lay our cards out on the table here. I want Wolf Alice to be a properly big deal. Not as much as they do themselves but, at their best, Ellie Rowsell and her gang of Londoners are a total force of nature. Watch them live and you'll see a sweaty mass of kids greet their every chord change. They believe. Should you?

In all honesty, 'Giant Peach' is a song for the fence-sitters. The first single to be released from Wolf Alice's debut album, My Love Is Cool, it wants to have you in raptures. Instead, I'm feeling deflated.

Stifled by a thirst for importance, the track offers a lot of well-intentioned huff and not much you can hum along to. A teasing 76 second intro: nice. A climactic stomp off into oblivion: spectacular. The riffing inbetween: forgettable.

If ambition is Wolf Alice's worst quality, then I'll happily forgive them.

Imagine a world in which 'bodyache' is not a song by Purity Ring, and is instead Carly Rae Jepsen's big comeback single. In this reality, the formerly lovestruck singer is bereft with self-loathing having not scored the boy of her dreams from 'Call Me Maybe'. Consequently, she has shaved her head and decided to dress like a blinged up Pan's Labyrinth monster.

Now I know what you’re thinking: Universal Music, sign me up. In the unlikely case that a new music management career does not beckon, then someone should at least put Megan James and Corin Roddick in the same room as a genuine popstar. Their cascading piano notes and confessional warblings are too good to go missing from the Top 40.

As the lead singer of Superchunk and driving force behind Portastatic, Mac McCaughan hasn’t spent the past 25 years twiddling his thumbs. Still, it’s taken the best part of two decades for Merge Records’ founder to put his name to a solo album. Listening to ‘Lost Again’ I’m not really sure why.

A lilting exercise in bittersweet nostalgia, it sees McCaughan sigh for suburban naivety over intertwined guitar lines. “I’m kind of looking for you / I’m kind of looking for me,” confesses our plaintive narrator. To be young and not have it all worked out. Turns out those are the days you’ll pine for, even with 16 albums to your name.

To Die For (Domino)

The Bohicas are an Essex quartet who play rock ‘n’ roll like they mean it. That is while swinging their hips, wearing matching leather jackets and lathering their songs with sultry harmonies. Because if you’re going to stick to tradition, you may as well do it properly.

Turn up the tremelo. Amp up the angst. It’s the oldest trick in the indie-rock book and, thanks to Claw The Ice, you’ll fall for it once more.

"Your egg, my semen, we can change the world.”

From the Beginning: DiS Meets Anathema

A triumph for the underdog: The War O...