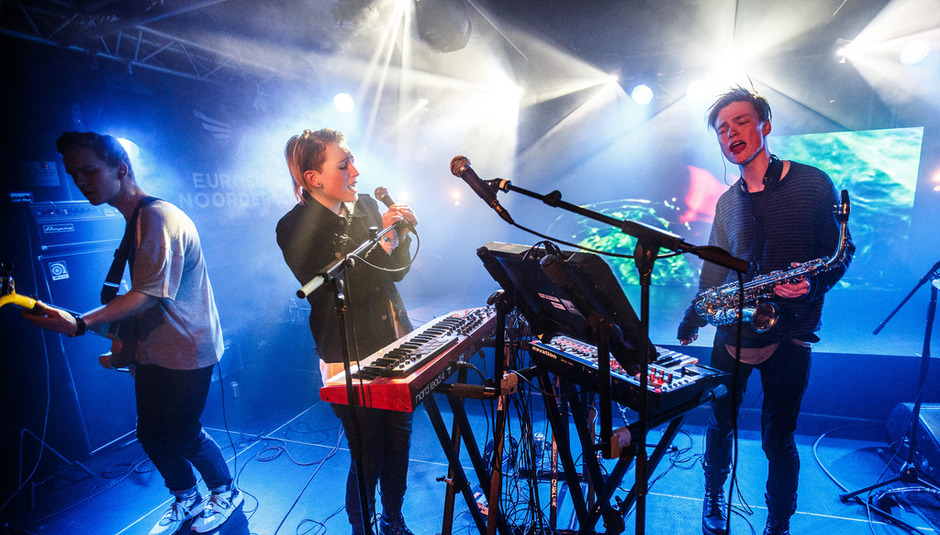 So, after hundreds of bands from across Europe spent a few days clamouring to be heard, the dust has settled on another edition of Eurosonic Noorderslag. It’s almost eerie how quiet the host city of Groningen becomes the Sunday after it’s all over: the previous nights had seen it crowded with people and heard music emanating from almost anywhere with a stage. Here’s what we managed to learn.

Iceland’s array of musical talent won’t be a surprise to anyone who has attended Airwaves at any point. But its status as ‘focus country’ at this year’s Eurosonic gave Icelandic artists a chance to make a big impression. Fittingly then, my first port of call is the welcome event for Iceland Music Export, which provides a little insight into the history of Icelandic pop music, as well as giving its latest wunderkind Júníus Meyvant the chance to play a couple of hushed, understatedly pretty songs while getting mercilessly muttered over. Shortly afterwards, the evening schedule proper kicks off as Samaris take to the stage, swathed in smoke and purple light - not to force an atmosphere, but to compliment that which is already guaranteed by the band’s music. Their sound is dense, particularly in a bass-boosted live setting, but nevertheless its subtleties are evident - ‘Hafið’s mournful siren-song vocals, the bright electronic sparkles that embellish ’Tibrá’, ‘Góða Tungl’s gracefully descending clarinet motif. If Björk and Sigur Rós ignited Iceland’s reputation for mysterious and beautiful music, then Samaris are worthy torchbearers.

Next up are another trio (well, four-piece in a live setting), Vök. The most obvious comparison I could make would be with The xx, but watching the band play live makes me realise it's not quite accurate - Vök are The xx, but with the fragility replaced with a subtle confidence. They're coy and emit an air of studied modesty, but you're still going to end up going home with them - the multitude of new songs on offer here are all unified by a little extra desire, a little extra aggression, and a little extra self-belief. That confidence is evidence that they’ve only gained in strength since I first saw them at Iceland Airwaves back in 2013, and it’s exemplified by vocalist Margrét Rán echoing 'Before's saxophone riff like she believes the entire crowd might one day sing along with her. She may well be right.

From one new Icelandic pop band to another, Young Karin are a more melancholic proposition. Their sound flirts with hip-hop, shimmering synth-pop and even Poliça-esque percussion, but listen closer and you’ll realise that their biggest influence is heartache. The kind of heartache that’s informed by long, cold winters (‘Berlin’), drowning in your own emotions (‘Black Water’), or the loss of a previously ever-present companion (’Sirens’). Even attempts to combat that loneliness are fraught with uncertainty, as on standout track ‘Hearts’, which sees guilt over a one-night-stand conflict with the desire for it to become something more. Combine all of that with the kind of pop music that gets hips moving and bodies touching, and you’ve got a formula for Scandi-pop success - hey, it worked for Robyn, right?

Fast-foward to the end of Thursday night and Kiasmos are due to perform one of the most anticipated sets of the festival, but not everyone’s so keen. 'I hate this... beard-stroking, pretentious techno,' proclaims one early departee of their headline set at the Grand Theatre - and while her description of the duo is miles wide of the mark, it has to be said that the early portion of their set is less than enjoyable, thanks to being crammed in at the entrance to the room with all the people who are more interested in talking than anything else. A concerted effort to squeeze through the crowd to a gap near the side of the stage improves matters considerably, and all it takes is the duo dropping ‘Bent’ - one of their rave-friendlier numbers - to make everything fall into place. Even ’Swayed’ - arguably the odd duck out on the duo’s album - makes sense blasted through a big PA, and the brand new track that follows ‘Burnt’ hints at the potential for more spontaneity in future performances. Such spontaneity might help Kiasmos transcend their already excellent recorded material and take their live performance to the next level - but for now, their unique spin on techno makes them worth hearing regardless.

Sometimes an artist’s recorded output cannot adequately prepare you for the experience of seeing them live, and Iceland’s dj. flugvél og geimskip is the perfect example. She bounces onto the stage looking like a cross between Lauren Mayberry and Björk, her pile of synths decorated with gold streamers and topped off with a colour-changing disco-ball-light-thing. What follows almost feels like a piece of performance art - dj. flugvél taking on the role of a bizarre storyteller, spinning wonky electronica into tales of evil cats, deals with the devil, spaceships, being cloned by aliens and I swear to God I'm not making this up. She’s quite clearly in a world of her own, but dj. flugvél og geimskip is very accommodating of visitors, so you might as well stay a while. As a bonus, I also catch her bemusing punters in a coffee shop the day after, which is a worthwhile experience in its own right.

Equally, a band can win you over in a live setting even if their recorded material left you cold. That happened with Icelandic post-punkers Fufanu - I hadn’t quite been convinced by debut single ‘Circus Life’, but their performance on Friday night left no room for nit-picking. Or doubt. Or anything really - it was a sheer sonic avalanche that swept up everyone in the room, and at one point things got so loud that the band had ask for their monitors to be turned down. I don’t think anyone else is complaining though - their agitated, moody take on Joy Division and Bauhaus is best heard at full volume.

Of course, Eurosonic is the chance to check out future UK stars before they blow up, and Years & Years are on my to-watch list for that very reason. All eyes are on frontman Olly Alexander, and it’s clear that there's a weird disconnect between his sultry vocal style and his awkward between-song banter. He confesses that early single 'Real' was inspired by getting dumped, before performing it with enough self-belief to make the ex in question feel at least a twinge of regret. Later, he’ll sit down at his piano and blurt out “this is the slow part of the set, so put your arms around your friends, touch each other…” - not with any bravado or lewdness, but with an endearingly embarrassed giggle. As for the band, they remind me a lot of Friendly Fires, and Olly’s vocal has a definite air of Michael Jackson about it - neither of these are bad things. The crowd might be a little flat, but under the circumstances (i.e. an industry-centric festival outside their home country) that’s to be expected, and it’s certainly not for a lack of trying on the band’s part.

Besides, none of this matters, because Years & Years will absolutely play to far more ecstatic rooms/tents/fields than this. You will see pretty girls dancing and swaying to these songs on this year's TV festival coverage, and signs will be held aloft professing love for the band, or emblazoned with lyrics such as “it's alright if you want to get used.” Years & Years may have been pre-ordained for success, but the reason that prophecy will come true is that they play catchy, danceable songs, and that those songs are sung with more than enough feeling make them meaningful. And that, dear reader, is what the people want.

I’m not sure if it was by chance or design, but most of the Dutch acts I saw at the festival had a distinctly Sixties/Seventies feel about them. The likes of Pauw, The Mysterons and The Indien all put different spins on psychedelic rock - Pauw were probably the best of the bunch - while youthful quartet Taymir are so readily influenced by 60s rock ’n’ roll that you’d think they were aiming to be The Netherlands’ answer to Miles Kane. There were a couple of exceptions, however. Nouveau Vélo were notable for drawing on the slightly more recent past with their three minute nuggets of jangly indie-pop, while Boiler Room-endorsed multi-instrumentalist Binkbeats surrounded himself with a studio’s worth of equipment to craft his engaging electronica live and in real-time.

I hadn’t expected such a huge queue to see Belgium’s Oscar & The Wolf, but of course, that only makes me guilty of very UK-centric thinking - clearly, Max Colombie and his band are already a significant force in The Netherlands as well as in their home country. And it’s not difficult to see why - the songs marry slick electro-pop with Alt-J style nuances, and Columbie himself is a charismatic performer. I get the impression that they could make an impact over here if they could shoehorn just one song into the UK public’s consciousness - for what it’s worth, ‘Strange Entity’ seems like the most obvious candidate. But equally, they’ll probably continue to do just fine for themselves if they don’t - it’s important to remember that there are plenty of other audiences out there in Europe, after all.

In Photos: Fall Out Boy @ Islington A...