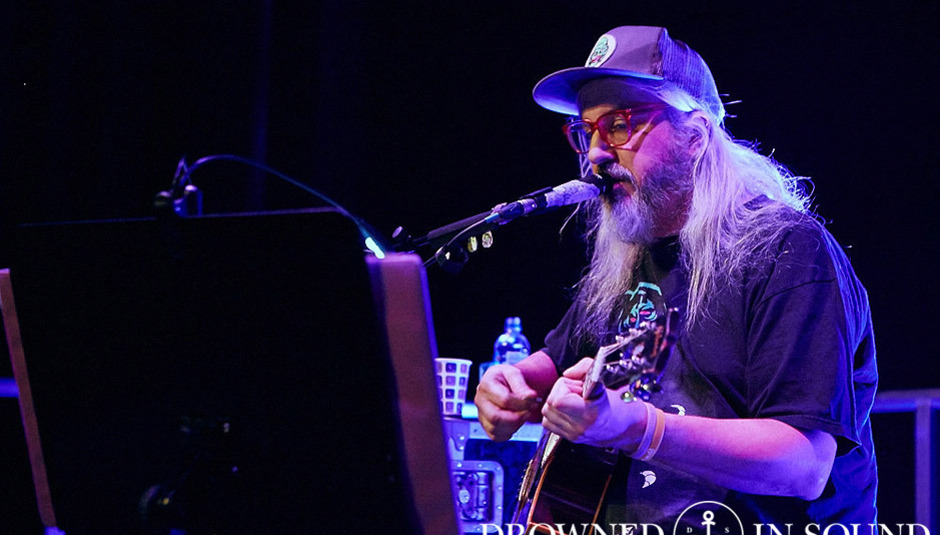 "If I have to deal with people I'd rather they already know what I'm about": DiS meets J Mascis

"If I have to deal with people I'd rather they already know what I'm about": DiS meets J Mascis

Having released his first record with Dinosaur in 1985 (the "Jr" tag was added shortly after), singer, guitarist and songwriter in chief J Mascis has amassed a wealth of musical treasures. While Dinosaur Jr's tenth record I Bet On Sky was released back in 2012, Mascis' latest solo LP Tied To A Star came out in August of last year.

Aside from music, he's also been seen playing the odd cameo role in Richard Ayoade's movie 'The Double' and US comedy sketch show 'Portlandia', as well as writing the soundtrack for 2013 flick 'Sunlight Jr'.

Currently in the middle of the UK leg of a world tour that finally comes to an end in New Zealand at the beginning of March. DiS caught up with him post-soundcheck at Nottingham's Rescue Rooms.

DiS: You're currently in the middle of a ten-date UK tour. Do you enjoy playing over here?

DiS: How do UK audiences compare to American ones?

J Mascis: I don't know. I don't usually compare them. It can change wherever I'm playing from night to night. I don't think there is a general UK audience.

DiS: What's been the most enjoyable show of the tour so far?

DiS: The whole tour in general.

J Mascis: Jeez. New York I guess. It's sort of not exactly my hometown but almost.

DiS: Do you feel more relaxed there? Is there the same level of expectation to hear specific songs from specific eras?

J Mascis: I'm really not sure what people are expecting when I'm playing alone. I'll start some song and get some sort of reaction. But I'm not always sure what era people want to hear. I just started doing 'Out There' even though I didn't really know if it would work. It sounds a lot different to how it did on the record but people seem to like it so I'll keep on playing it.

DiS: What do you enjoy most about touring?

J Mascis: Just seeing different friends in different places. It's a good opportunity to catch up with people I wouldn't normally see at home.

DiS: Do you prefer playing solo or as part of a band?

DiS: I guess there's less margin for error when you're playing alone?

J Mascis: Right. And you've got to keep all the balls in the air so you can keep it all going.

DiS: How do you choose a setlist for a show like this, especially considering you have such an extensive back catalogue?

J Mascis: I see what songs work off the new record then a few other ones that I feel like playing. I try to work it into some kind of sequence that makes sense to me and stick to that.

DiS: Are there any songs from your back catalogue you don't see yourself playing live again?

J Mascis: It depends. There are periods where I get sick of songs. Sometimes they come back so it's hard to say.

DiS: Your latest album Tied To A Star came out last summer. How long did it take to record?

DiS: Do any of the songs date back further?

J Mascis: They're all fairly new.

DiS: Were there any that started off as ideas for Dinosaur Jr songs or are they structured in a different way?

J Mascis: At first I come up with an idea for the vibe of the record I want. Then I start writing. If the songs I come up with don't fit into that vibe then I save them for something else.

DiS: Are there any songs left over that didn't make the record and if so, will any of them see the light of day in the future?

J Mascis: Yeah, there's a couple that didn't make it. One came out as a b-side. There's another one that I might possibly release at some point.

DiS: There's numerous guests and collaborators on the record including Chan Marshall. Would a song like 'Wide Awake' have worked the same without her input?

J Mascis: I did think when I was recording the song her voice would sound good on it. She was quite hard to pin down, so I'm glad it worked out.

DiS: Mark Mulcahy and Black Heart Procession's Pall Jenkins also played on the album. Was there ever a point where you thought about taking them and some of the other people that played on Tied To A Star on this tour?

J Mascis: No, it was always going to be me playing solo. I'm meant to be playing a TV show in the States and I think Mark's going to sing with me on that. Hopefully with the whole band.

DiS: I guess logistics and other people's commitments would make it difficult for everyone to tour?

J Mascis: I never thought about it.

DiS: John Agnello co-produced the record with you. Having also worked on the last two Dinosaur Jr albums, is he someone you consider an essential part of the recording process?

J Mascis: Well, to me it's easier. He's comfortable at my house and I've worked with him a long time so he already knows basically what I want. So I don't have to explain anything. It's easier to tweak because it's already part of the way there. I don't want to have to try and train someone else.

DiS: Are there any other producers you'd like to work with in the future?

J Mascis: I haven't thought about it that much. It all seems too expensive. I don't have as much money to throw around these days.

DiS: You've been signed to both major and independent labels at various times over the years. What were the main differences between the two? Did you feel your creativity was ever stifled on a major?

J Mascis: No, it was totally left alone. The only difference came towards the end of our time on a major when we heard the famous last words, "I don't hear a single." Oh, I guess that's the end then... Before that they never said anything to us.

J Mascis: I think by that point we'd become jaded. It was horrible. The good times were definitely over.

DiS: You've always been a prolific songwriter. Do you still write with the same enthusiasm as when you first started out?

J Mascis: Yeah. I've got to do something I guess!

DiS: Will there be a new Dinosaur Jr record in the foreseable future?

DiS: You've put out a few cover versions over the years including The Cure's 'Just Like Heaven' and Mazzy Star's 'Fade Into You'. What made you choose those two songs?

J Mascis: Megan Jasper, the vice-president of Sub Pop, asked me to record 'Fade Into You' for her wedding. She made a 45 of it and gave it out at the wedding. That's where it came from. With 'Just Like Heaven' I always wanted to do a bad version of the song, and it doesn't help anybody!

DiS: You recently appeared as a caretaker in Richard Ayoade's film 'The Double'. How did that come about?

J Mascis: He's a fan of my music and he asked me if I wanted to be in the film. That's about it.

DiS: Did you enjoy playing the role?

J Mascis: Yeah, it was great just to see how movies are made. I've watched a few movies so it's always interesting to see how these things work.

DiS: Is it something you'd like to become more involved with in the future?

J Mascis: I suppose I'd do it if somebody asks me. I'm not sure whether I'd pursue it or anything. I don't really feel like an actor. But if it's fun I'll do it.

DiS: You also did the soundtrack for Laurie Collyer's 'Sunlight Jr' last year. Is that something you might pursue in the future?

J Mascis: Yeah, I enjoyed that. Although again, it would have to be with the right person. Somebody that already likes my music. I'm not very good at trying to sell myself and convince someone they need my music with their film. If I have to deal with people I'd rather they already know what I'm about. I can do other things that sound different which a lot of people might not know about because they've only heard what I've recorded as songs. With soundtracks it can be a lot easier. You watch the picture and it tends to write itself. I have tried where it's a little bit more Hollywood or something. There's too many people involved. I guess I don't very well in that kind of environment.

DiS: How does the process work? Do they give you a script and ask you to construct music around it?

J Mascis: No, they give you scenes to watch. Your job is to see where they go so it does write itself most of the time. It's about making sure it fits in. It's easier than writing a song because you already have something to go on. You already have a vibe or an image so you're further down the road. Whereas a song starts from thin air about nothing.

DiS: Are there any other projects or collaborations you're involved with at the minute?

J Mascis: I have a few people asking me to do this and that, so we'll see if anything happens. I also play drums in a band called Witch. We don't play that many shows but we do have a gig coming up. It's the Burgerama festival in March for Burger Records.

DiS: Will you be playing any other festivals this year?

DiS: I enjoyed your set at Glastonbury in 2013. How was it for you?

J Mascis: I really liked it. That was our first time at Glastonbury. Some people really hate it. I'd heard a lot of different opinions before we went there, but I thought it was cool.

DiS: You've been cited by numerous artists down the years as an influence. How does it feel to be held in such regard by other musicians?

J Mascis: It's always nice to hear someone is into what you're doing.

DiS: Are there any whose music you're particularly fond of?

J Mascis: I don't know. It's hard to tell. I mean, I know a few people out there who like my music but it's hard to say if I've influenced them unless somebody tells me.

DiS: What about the music press? Do you pay much attention to what they're writing about you?

J Mascis: No, I try not to read it. Even if they're saying good things about me I'll find something bad in there, so it's best to avoid it altogether.

J Mascis: Don't do anything if you feel you have to do it. I don't know what to advise them to do except keep going if it's what you really want to do. It's not the easiest thing to do but then again it's not as bad as working at McDonalds!

For more information on J Mascis visit his official website. 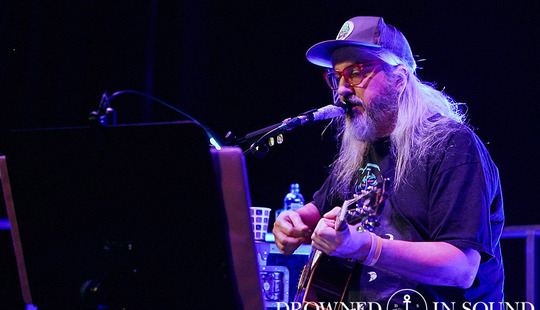 Dutch Uncles singles special: "I was ...