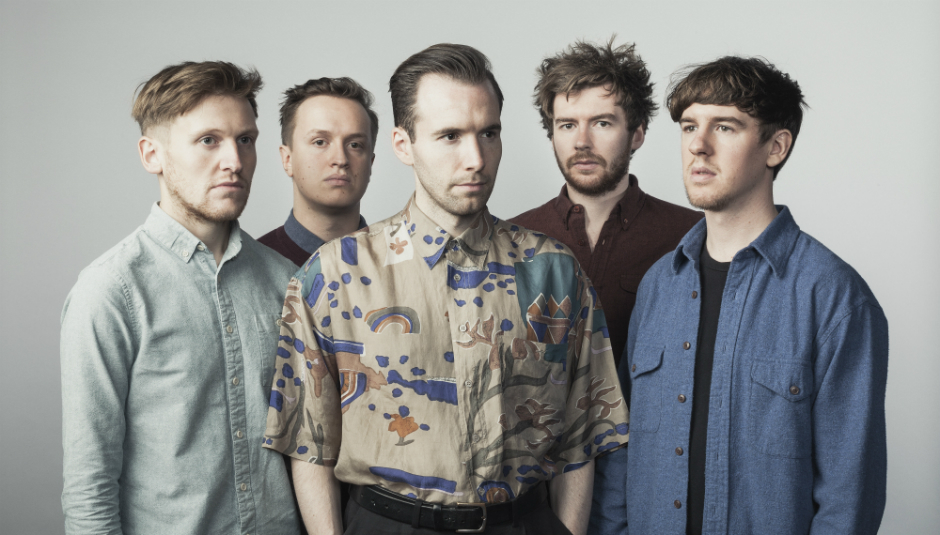 Dutch Uncles singles special: "I was in the room naked and absolutely drowning"

Dutch Uncles singles special: "I was in the room naked and absolutely drowning"

Hello and welcome to a special Dutch Uncles edition of DiS Does Singles.

In honour of the off-kilter quintet's splendid new song, ‘Decided Knowledge’, we've dedicated the entire column to their superior art-pop ways. That means an interview with frontman Duncan Wallis about O Shudder and singing in your smalls, a playlist of the band’s greatest hits so far, and our verdict on their latest offering.

Clue: it’s a big thumbs up.

In case you hadn't noticed, Dutch Uncles are a decidedly clever bunch. Since forming seven years ago the Marple-based quintet have thrown obscure time signatures around like confetti, crafting indie pop gems from chord structures that most plebs would balk at. Stick on Out of Touch in the Wild or Cadenza and you feel that little bit smarter. If Mensa had a record collection, then 'Bellio' would be its official sex jam.

In amidst this immense intelligence, Duncan Wallis and co showcase something arguably more more important: a sense of humour. 'Decided Knowledge' is a song for the dunces. It's a tale of ignoble failure told by an auteur who's desperate for approval.

"You've got it / The curriculum vitae," goes the reassuring call and response at the track's opening. Yet O Shudder's second single to date is riddled with self-doubt. Inspired by a flunked job interview, it can't just suit up and embrace the world of business-speak. Instead a fizzing guitar lick teases at conventionality while spare flecks of synth and bass fly about all over the place.

Only with its chorus does the song click into place. Wallis utters the word “harmony” and his vocals swell towards tongue-in-cheek serenity. A state that's soon interrupted by nagging splinters of nervous electronica. As with 'In n Out's awkward carnal dance, Dutch Uncles can't help but make light of their own anxieties. In the most smart-arsed way possible, of course.

Dutch Uncles: The Single So Far

What’s the story of ‘Decided Knowledge’?

I went to this interview and completely ballsed it up. It was a council job at an arts centre in South Manchester, and no matter how good your personal experience is, bringing that up in an interview doesn’t count for butkus.

It was just embarrassing because I actually knew the people who were interviewing me. So I was in the room naked and absolutely drowning. So ‘Decided Knowledge’ became a melodramatic reaction to that feeling of, ‘This is what it takes to be in the working world and I am not part of it, but I have to be’.

There’s a nice touch in the song around your “harmony” line.

I remember our producer Brendan [Williams] saying, “On that line where you say ‘harmony’, Dunc. Let’s put a harmony in there.” Then I collapsed to the floor and said, “Nah. We can’t do it like that, but we did and it actually worked out very well.”

So how does the single to fit into O Shudder?

The album is an exploration into all different areas of doubt. It starts with a very confident person wanting to have babies with someone and then that person is asked to look back on their life and realise they’ve never been sure about any decision they’ve ever made.

We’d pretty much finished the album and were missing two songs. We were told that these two songs were singles. So I thought, ‘We’d better write a single.’

With ‘Decided Knowledge’ it was difficult to think of a topic that was going to slot in easily to the album. Luckily, I came up with the first “curriculum vitae” line, and was like ‘Where the hell did that come from?’ I was just trying to follow the synth line and then I realised I’d been for a job interview that was obviously playing on my mind.

If you could have picked your own single from the album what would it have been?

I would have loved for it to be the album closer [‘Be Right Back’] where death just goes on and on. I was hoping that would be our reintroduction track, as a curveball. You don’t have to put a single straight away. It would have been nice to have put something that was pushing five minutes out there. I think we missed a trick there.

You went with ‘In n Out’ as the lead single instead. It’s a very mechanical look at seduction.

If I’m honest about ‘In n Out’, one thing that makes it a bit of an awkward song is that it’s coming from a negative place. I think that was a mistake on my behalf. I should have tried to come from a more positive place in terms of trying to have sex with your mate instead of being like, ‘Oh I feel like I’ve got a sickness here.’ It’s almost as if it was a bit of a whinge… I think if people focus on the crushing pad noises in the chorus they’ll find it a lot more uplifting.

You went big on strings for the last album. What’s changed since?

One of those was a harp. None of us could play it. The thing is as soon we mentioned we’ve got a harp it was like, ‘Oh great. we’ve got to get a MIDI harp now.’

Have you seen what they look like? Jean Michel Jarre uses one. It’s like six lasers that come up from the ground and you have to pick at them. It would look amazing. I’d have a lot of fun trying to do it, but it would be a car wreck of a live show.

It’s probably for the best then.

We looked at some Japanese instruments, but when we realised that we didn’t know anyone who owned one, let alone could play one. It was like, ‘Why the fuck are we adding instruments that we’ve never seen in our lives?’ You’ve still got to keep yourself relatively grounded.

What have you been reading recently?

I’ve been reading a mix of Allen Ginsberg's Reality Sandwiches. It’s alright. I don’t quite get it. I watched a film about him with James Franco in called Howl, and that was pretty fascinating. So I found this book in my dad’s collection, I’ve had it for a while and I’m still trying to get to the bottom of it. There’s a poem called 'Little Green Cars' that I really like the idea of.

I’ve never really got poetry until I got into John Cooper Clarke last year. Now I understand it a bit more. I was always more of a film studies student than I was an English Lit one.

Is that a bit strange, given you’re a lyricist?

It’s a bit odd. I’m trying to write lyrics without music for a change and see what actually happens. With the time signatures and the rhythms that this band come up with, there’s almost no point of me ever starting with a blank page. It’s like, ‘Find the place where you can sing and then think about it.’

With ‘Decided Knowledge’, it feels like there’s a lot more emphasis on your singing?

It was quite hard actually. I thought I was a better singer than I was. I felt quite negative about Out of Touch in the Wild, just before we started making O Shudder because I’d shied away from some of the singing. I didn’t want to offend the music that was there and I didn’t want to be coming along sounding Mancunian or Northern. I hadn’t really adapted a style at that point and I probably still haven’t.

This time listening to John Cooper Clarke, someone who’s got a very gifted voice. They’ve never sung but their voice works really well and they’re just kind of relaxed about it. Listening to him and a lot of crooner voices like Paul Buchanan of The Blue Nile, you just realised that the only thing to do is to be relaxed.

How do you do that?

I got down into my pants for 'Babymaking'. Only cos’ I kept getting really angry with my takes. Every time I was getting unhappy with a take I’d go out of the room take off a piece of clothing and walk back in again. Taking off a piece of clothing was almost like a way of restarting my brain again, ‘I’m wearing a different outfit now, this is going to be great and that just kept happening until I was down to my pants.’

If I’d been in a private booth, the pants would have come off. I know the others had pushed themselves in a similar way. Probably with their pants on.

Petite Noir has been knocking about since 2012, but it looks as though this might finally be the year he comes to prominence. ‘Shadows’ is Yannick Ilunga’s second track to be teased from his imminent EP, The King Of Anxiety, and it oozes with electro-soul class. “I'll be here forever / Baby tell me more / Tell me if you want me / I'll be there for sure,” trembles the South African singer over icy stabs of bass and chiming percussion. In lieu of new tunes from Sampha and Frank Ocean, this will do nicely.

The best moment on Mini Mansions' debut album was 'Crime Of The Season', a not so subtle nod to their psychedelic forefathers The Zombies. With their forthcoming LP, The Great Pretenders, the LA-based trio have gone one better. Brian 'The Beach Boy' Wilson guests on 'Any Emotion' and, even if you'll struggle to hear his contribution, you'll still have a fine time listening to the simpering slowburn falsetto.

Nominations for the 87th Academy Awards were announced last week. By complete coincidence, Oscar (Scheller) also unveiled his first single for Wichita. SEO shenanigans be damned, 'Daffodil Days' is a charming cut of foppish indie that's stuffed full of baritone trembles and whispish guitar riffs. No prizes for originality, but a good ‘un all the same.

“You don't have to leave / You could just stay here with me / Forget all the local police / We could find comfort in biology.”

In Photos: Catfish and the Bottlemen ...