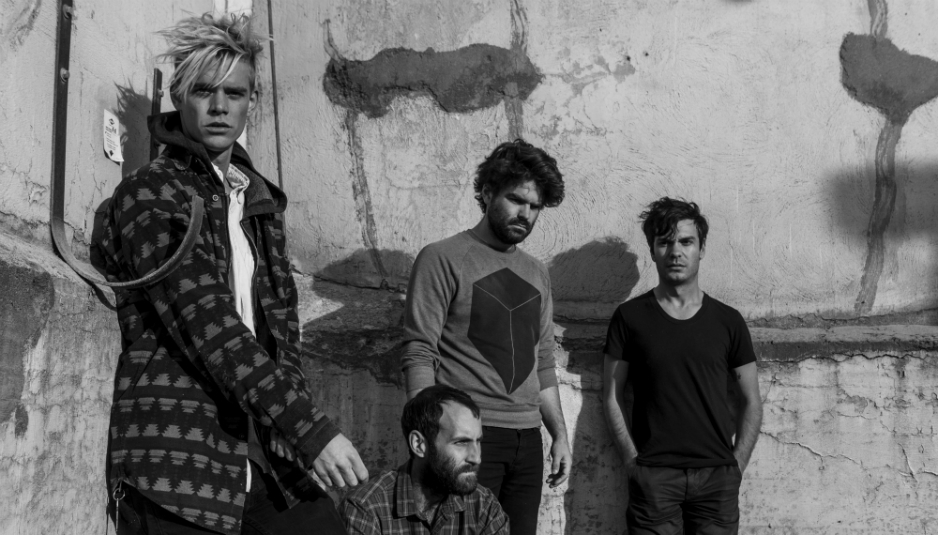 Hello, and welcome to your first proper DiS Does Singles of 2015. As ever, we’ve rounded up the best music to be released last week into one handy compendium.

Today, Viet Cong have been awarded Single of the Week (again) for the astounding ‘Silhouettes’.

Q: Can the Canadian quartet do no wrong?
A: Just wait until you’ve heard the album.

Elsewhere, Belle and Sebastian (who takeover the site this week!) continue to be poke fun at British politics in ‘The Cat With The Cream’, Modest Mouse finally have a new record due out, and Years & Years prove themselves unworthy of your ire.

That’s in addition to the latest tracks from The Go! Team, Charli XCX, Anomie and Action Bronson.

The first time you hear a favourite song is a teeny bit like falling in love. You remember where you were when it happened, who you were with and what it felt like. Alas, the first time we heard 'Silhouettes' was on a Sunday evening, while sat alone in our pyjamas and hunched over a laptop.

This anecdote is a real shame. Not only does it reveal us to be fundamentally uncool, but 'Silhouettes' also deserves a lot better. The latest offering from Viet Cong's self-titled debut album leaps out of your headphones from the get go, assaulting your lugholes with a hail of rat-a-rat percussion and agitated guitar chords. Its sonic chaos rallies against your surroundings, edging you towards somewhere altogether more uncomfortable... and doomy.

It's one thing to string some nihilistic lyrics together, and another to make you shudder along in time with them. In ricocheting from spitfire theatrics to swirling hysteria, Viet Cong never let you settle into 'Silhouettes'. As with last year's 'Continental Shelf', you're thrust from one breathless sensation to the next - an experience you won't soon forget.

So do yourself a favour before listening to our Single of the Week. Step away from your desk, treat yourself to five minutes elsewhere and for god's sake make sure you're appropriately clothed. Songs like this don't come along often.

The Cat With The Cream (Matador)

What a lovely song ‘The Cat With The Cream’ is. All trembling strings and sweet, lilting harmonies, it may well be the most genteel ditty to ever put the boot to Westminster politics. “Grubby little red MP / Yellow flapping hopelessly / Tory like the cat with the cream,” coos Stuart Murdoch, as though he’s reciting a lullaby for the disenchanted.

Despite their disdain for the ruling class, Belle and Sebastian’s latest cut from Girls in Peacetime Want To Dance never succumbs to trite caricature. Their brand of satire is devilishly restrained, reserving its punchlines for the moments when they’ll leave a mark. In doing so Murdoch and co share something in common with the subjects of their ire. They’re at the peak of their powers and having a blast.

If real life is anything like our imagination, then Isaac Brock has spent the last eight years sitting on his front porch, sipping from a six-pack and staring at the heavens. What better way to waste away your days? Except perhaps getting on with that new album everyone’s been waiting for.

While Modest Mouse haven’t been the most productive outfit since We Were Dead Before The Ship Even Sank, ‘Lampshades On Fire’ at least confirms they haven’t gone shit during their extended vacation. Packed to the brim with twisted syllables and fitful hooks, this lead single from the forthcoming Strangers to Ourselves is a welcome reintroduction to the band of half-cut ruffians. Admittedly its inclusion in a January singles column is a little tardy but, hey, we're only imitating the best.

Years and Years are the winners of this year’s Sound Of poll, and it’s hard to resent them too much for this achievement. The trio’s slick house-pop is catchy enough, they come off well in interviews and (crucially) they’re not James Bay.

‘King’ is supposed to herald their grand arrival onto pop’s mainstage, but from the sound of it you’d figure they’ve been there all along. Giddy synth squiggles meet romantic entanglement and the result is something that could well crack the Top 20. If Chvrches fixated on the skin deep then they too might have a hit.

The Scene Between (Memphis Industries)

Believe it or not The Go! Team have been plying their inimitable racket for just over a decade. While not much has changed since the days of their Mercury Prize nomination, they remain awfully good at kicking up a clamorous fuss.

Following 2011’s thoroughly underrated Rolling Blackouts, the Brighton sextet dissolved leaving head honcho Ian Parton to pick up the pieces and rifle through his record collection for vintage girl group and garage-rock inspiration. If that hardly strikes you as the worst ‘going solo’ experience, then ‘The Scene Between’ isn’t going to top up your sympathy levels any further. It’s joyous fuzz and chiming vocals sound like a noise-pop funfair.

In case you were counting, ‘Doing It’ is the sixth single to be released so far from the perennially delayed Sucker. What’s the difference this time around? Well, Rita Ora’s onboard for a guest verse and added radio allure - so there’ll probably be a lot of cash chucked at its video. Otherwise it's business as usual for Charli and her boom clap bombast which, if you haven’t guessed already, we’re big fans of.

Seasons change, years will come and go, but lo-fi break-up songs are 4eva.

“I feel so alive I think I shit myself.”

In Photos: Slowdive @ The Forum, London

Our Town: Belle and Sebastian's guide...