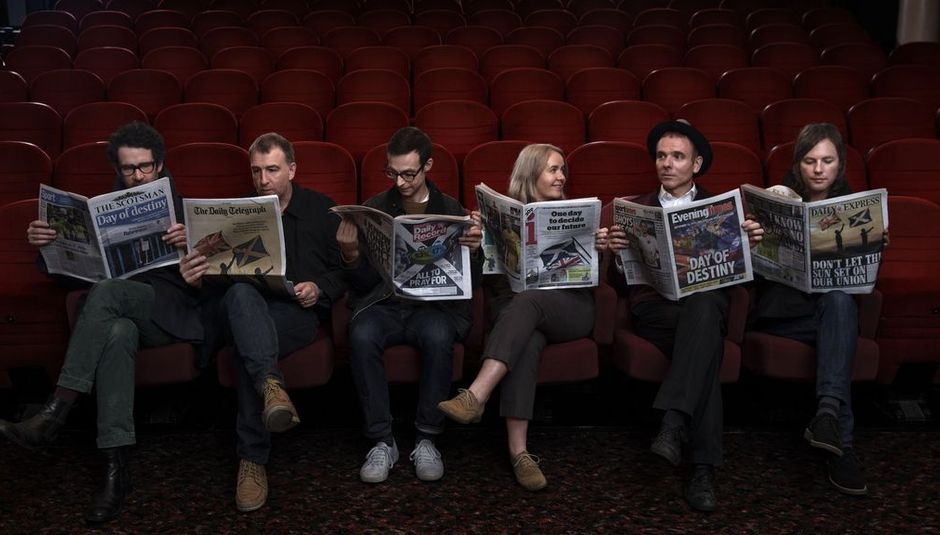 The Party Line and the best of Belle and Sebastian - DiS Does Singles 03.11.14

The Party Line and the best of Belle and Sebastian - DiS Does Singles 03.11.14

Hello and welcome back for another DiS Does Singles. As ever, we've rounded up the best new songs from the past seven days for your listening pleasure. Because that's what you deserve.

Today, Belle and Sebastian have sort of done an Arcade Fire and bagged themselves Single of the Week. Give ‘The Party Line’ a line a spin and have a little jig.

If a fresh slice of Glaswegian indie isn’t enough to set your pulse racing, then we’ve got several more immense tricks up our sleeve. Mini Mansions are back with a scarily good track, Shamir has announced his arrival with a sensational amount of arrogance, and She & Him continue to churn out decent covers. Plus, FKA Twigs, DMA’s and Tigercub deserve your attention too.

All in all, it’s an ace week for new music. Huzzah!

So the rumours weren't quite true. After Stuart Murdoch's vocal support for the Scottish referendum and a typically arch press shot, the suspicion was that Belle and Sebastian had made a political album. Something that would stick two fingers up to Westminster in a thoroughly literary fashion.

Thankfully, 'The Party Line' is a little more subtle than that. It sees Write About Love's forgettable strum ditched in favour of something you'd want to pull shapes to. Girls in Peacetime Want to Dance, and B&S are deliriously pleased to oblige them. Triumphantly silly synth and a hulking bass riff that's cribbed from 80s dance-pop is very much the order of this new era. When Murdoch channels the sardonic tone of Neil Tennant, you can hear him croon with one eyebrow raised.

“People like to drive their cars and smoke up / People like to sit inside and toke up,” he decrees in a gleefully preening fashion. Having turned his hand to novel writing and film direction, it’s a relief to hear the ‘Expectations’ singer can still pen an indie banger.

Far from being a revolution for B&S, their 13th single is a return to old ideals. The band first went disco on Tigermilk's 'Electric Renaissance' and have dabbled with toe-tapping infusions ever since - from 'White Collar Boy's fullsome stomp to the subtle inflections of 'Sleep The Clock Around'. Whether 'Party Line' is another one-off or not remains to be seen. Still, why worry about that when you can bop along?

Playlist: Best of Belle and Sebastian

To celebrate the arrival of a new Belle and Sebastian single, we've made a playlist of their best moments so far. It's the the pefrect refresher if you've forgotten what Stuart Murdoch's lot are about, or just want reminding...

Death Is A Girl (Fiction)

Mini Mansions are the Foo Fighters to Queens Of The Stone Age’s Nirvana. By that we mean QOTSA’s Michael Shuman is their bassist/vocalist and they are infinitely better than your average side-project/spin-off band. Now, after a four year hiatus, the psych-rock trio are back to take some names, kick some ass and generally give you the shivers in a good way.

‘Death Is A Girl’ picks up where their debut album left off by reimaging The Addams Family theme tune in the style of a David Fincher movie. Its organ-lead rumblings are eerily demonic, while a four-four drum beat pounds through the track like the relentless chug of a ghost train on route to Amityville. As the first cut from the LA outfit’s forthcoming second record, The Great Pretenders, it bodes ferociously well. Giving that album also features guest collaborations with Brian ‘The Beach Boys’ Wilson and Alex ‘mic drop’ Turner, it’s one you have our express permission to get quite excited about.

On The Regular (XL Recordings)

Sure, the hyperactive synth-pop thing has been done before, but this new tune from Shamir is utterly brilliant. Hailing from the outskirts of Las Vegas, the 19-year old songwriter has just signed to XL Recordings as their bright, new darling and it’s easy to see why. ‘On The Regular’ is the kind of song to make you sit up and pay attention.

A hip-hop brag track that’s packed to the rafters with cowbell and juvenile punchlines, “Had an Apple phone, fuck a Fisher-Price / Never see the sun cause I'm up all night”, it’s at once completely surreal and hideously catchy. You’ll be on your feet in raptures from the moment its bass throb drops.

After last year’s unspectacular Volume 3, She & Him have signed to a major label, Columbia, and retreated to the comfort of covering their favourite songs by other artists. This is of course what Zooey Deschanel and M. Ward have done regularly since joining forces in 2006, but Classics will be their first record to be comprised entirely of non-original material. In saying this, we’re discounting A Very She & Him Christmas because it was a) a novelty album and b) rubbish.

‘Stay Awhile’ is a nice enough rendition of Dusty Springfield’s kitchen sink standard. It skips and swoops in all the right places, and Deschanel is a dab hand at sweet, vulnerable vocal lines. Still, it’s a shame to see the duo stick to what they know when they’re quite capable of conjuring up some brilliance of their own. Another ‘In The Sun’ or ‘Sentimental Heart’ is overdue.

When you’re on death row and moments away from meeting the lord almighty, you could probably do without FKA Twigs writhing around in your execution chamber. Still, that is the premise for Tahliah Barnett’s latest video and it’s not in the least bit po-faced.

‘Video Girl’ is emblematic of LP1 in that we want to like it a lot more than we actually do. Amidst its shrill confessions,“The camera on you ain’t that enough?”, and lusty undulations, you’ll struggle to dig out an actual tune. In the aftermath of the Mercury Prize, we wonder what's next for the YouTube sensation and Top 10 no-mark.

Let’s face it, Lee Mavers is never making another album, so its just as well that DMA’s exist. Their latest single ‘Laced’ is a rose-tinted throwback to Britpop’s singalong melodies and revels in this vintage worldview. It’s not a bad pastiche for a trio of Aussies.