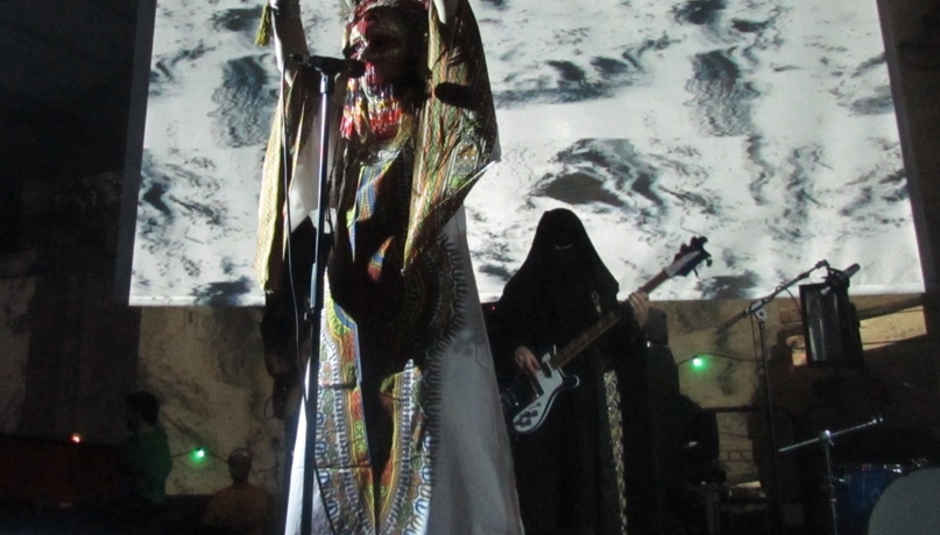 A lot has been written about the "psych" explosion currently taking place yet so much of it has missed the point. Far from being an excuse for nostalgic throwbacks or rummaging through your parents' record collections. Prise beneath the surface and there's a wave of progressive, challenging and downright innovative artists waiting to be discovered. Which is where an event like Liverpool's International Festival Of Psychedelia (or Liverpool Psych Fest as it's commonly known) comes into its own.

Now in its third year, 2014's edition being the first to completely sell out of both weekend and day tickets in advance. Highlighting its growing reputation as Europe's most prestigious event of its kind, this year's annual soiree at the city's Camp & Furnace art space saw over sixty bands play over two days (Friday 26th & Saturday 27th September) alongside an array of other attractions. Head up the stairs through the Blade Factory area and Butthole Surfers' 'Blind Eye Sees All' film plays menacingly in the Pzyk Cinema. Veer through the corridor into the main space and Piccadilly Records World Of Psychedelic Wax Wonders boasts arguably the largest merchandise stand of any UK festival this summer. Further along, the Pzyk Gallery hosts a screen print workshop while Dan Tombs' VDTWRBBL art installation plays in the background. Elsewhere out front in Greenland Road's cordoned off pavement, Happy Hookah's Pzyk Palace serves up herbal shisha, tulsi tea and organic coffee while guest DJs Andy Votel and Joel Gion merrily reel off tunes under its canopy.

Liverpool Psych Fest really isn't like any other festival we've ever experienced, and that's before we even get onto discussing music. With a line-up pulling together established and lesser-known acts from every corner of the world encompassing all musical genres, the organisers have conjured up a bill far beyond the stereotypical definition of psych rock. We stumble into Friday's activities courtesy of the maelstrom of noise that is Formes. The Leeds three-piece, playing a riff-heavy set in the vein of Deafheaven or The God Machine provide an early wake-up call of what to expect.

Or maybe not, in the case of The Asteroid #4 at any rate. Veterans of the scene in many ways; they released album number eight earlier this year, their first since hooking up with London imprint Bad Vibrations. It doesn't show during a high octane set that veers from downbeat melancholia to visceral spacerock in an instant, occasionally doffing its cap to The Byrds and Spacemen 3 every once in a while. One-time associates of The Brian Jonestown Massacre, their hive of influences rising to the fore during a blistering cover of Catherine Wheel's 'I Want To Touch You' as the set draws to a close.

It really shouldn't get any better. Yet within an hour DiS finds itself awestruck once more. As long time admirers of Bristol's Spectres it probably doesn't come as that much of a surprise. And yet the progress they've made both from a songwriting perspective and as live performers is simply breathtaking. Recently signed to Sonic Cathedral, whose head honcho Nathaniel Cramp proudly declares will be the album of 2015 upon its release in February of next year, they're a blistering cacophony of twisted melody and brutal noise. Comparisons to A Place To Bury Strangers not far off the mark, Spectres emergence as a devastating live force to be reckoned with makes us proud to have witnessed those early shows in toilet venues little over a year ago.

Amen Dunes laidback folk might seem a weird supplement to the collage of sound taking place around them (they play as a three-piece here), yet their solemn repertoire sets the scene admirably for Allah-Las' West Coast tinged pop. Having spent the past week wowing various corners of the British Isles, the LA four-piece breeze through their headline set like consummate professionals. Playing material from both 2012's debut and recent follow-up Worship The Sun, it's easy to see why they're responsible for pulling the Furnace stage's biggest crowd so far.

Sadly, a large proportion don't stick around for Pow!'s lo-fi garage schtick that recalls such luminaries as Nation Of Ulysses and The Make Up. However, it proves to be their loss and those who stay are treated to a riotous encore more akin to a hardcore punk show. Not that we're complaining. Such diversity makes Liverpool Psych Fest that bit more special, and Suuns electronic art rock brings the first day's proceedings to a close.

Saturday brings several rays of bright sunshine and another of Liverpool Psych Fest's new introductions for 2014, Adventures At The Outer Reaches. Again taking place in the upstairs space above the Blade Factory stage, various symposiums will see Rocket Recordings'' Chris Leeder and Teeth Of The Sea's Jimmy Martin talk about the label, Les Big Byrd's Jocke Ahlund and PNKSLM's Luke Reilly discuss the Swedish psych rock scene, and David Stubbs display an extensive knowledge of Krautrock and its origins.

It's left to Stockholm sonic terrorists The Janitors to up the intensity and noise levels. Taking inspiration from influences as disparate as Nine Inch Nails, Loop and Killing Joke, their post-industrial melodramas bathed in halos of distorted reverb and feedback make for a visceral yet enterprising teatime. Spoilt for choice with so many clashes, DiS sets out its stall to cover all bases and fails miserably which means The Lucid Dream - playing what appears to be their as-yet unreleased second album in its entirety - get precedence over Cheval Sombre's desolate musings.

It's acts like the next duo though that demonstrate the eclectic nature of Liverpool Psych Fest. Sitting uncomfortably between the raw stylings of Arab Strap, experimental meanderings of The Beta Band and occasional forays into eighties synthpop are Grumbling Fur. Dour yet warmly captivating is their banter, the next forty-five minutes are about as exhilarating as it gets. Opener 'Protogenesis' takes its lead from the heady days of the Hacienda while recent single 'All The Rays' sounds like Tears For Fears reared on a diet of Neu! It's the delectable 'Ballad Of Roy Batty' that takes their set to stratospheric levels, lifting the roof off the Furnace in the process. Main protagonists Alexander Tucker and Daniel O'Sullivan even crack a smile at the song's conclusion, clearly enamoured by the joyous response out front. Arguably the most progressive, forward-thinking act on this or any other festival bill we've encountered this summer. What folk would sound like if it made the effort to move into the 21st Century. Cambridge take note.

Having watched Sleepy Sun's impressive stoner Sabbath hybrid dazzle in the Portuguese sun at Valada two weeks earlier, they're in similar form here too. Drawing an expectedly large crowd, no one leaves early or disappointed, frontman Bret Constantino also genuinely overwhelmed when the audience demands an encore. Over on the Camp stage, Swedish trio Hills specialise in improvised jams clearly influenced by Spacemen 3's 'Suicide'. This isn't a bad thing, and we stay put until their conclusion.

Dublin's September Girls have already crafted one of the year's finest long players in Cursing The Sea as far as these ears are concerned. Yet for some reason, their presence on the bill seems somewhat out of place - even in such diverse company - and it shows in their demeanour on stage. Thankfully, the same cannot be said for Teeth Of The Sea who overcome the odd technical fault by playing as though their lives depended on it. Drawing what can only be described as a huge crowd, a sniffly DiS struggles for air in such sweaty confines and is forced to leave before the end.

Which gives us time to grab a front-of-stage spot for One Unique Signal. Having come on in leaps and bounds over the past couple of years, their set ends up being one of the weekend's highlights. Fusing elements of noise, metal and shoegaze with a penchant for Germanic grooves, they also play a set full of life affirming vitality.

Christian Bland & The Revelators fuzzed out drone rock appeases the heaving throng assembled in the Furnace, many of whom have arrived early to ensure a better vantage point for this evening's headliners. When Goat appear on stage, pandemonium ensues causing the venue's security staff to not only lock the doors, but also actually prevent people from leaving until the conclusion of Goat's set. Decked in their now customary costumes and headgear, the mysterious seven - as they shall now be known - concoct what can only be described as a bonkers but brilliant spectacle for the next hour. Worthy of bill-topping status at any event, their mix and match approach of combining the best from this year's Commune LP and its predecessor World Music pays dividends, an extended 'Run To Your Mama' that lasts a good minutes being the undisputed highlight.

Afterwards, we're informed the bar has been drunk dry, literally. It's left to Camera's teutonic electronica to bring the curtain down on Liverpool Psych Fest and 2014's festival season (for this reveller at any rate). With its place now firmly etched on the festival calendar, it goes without saying we're already chomping at the bit for the 2015 edition. Same time, same place next year. Until then...