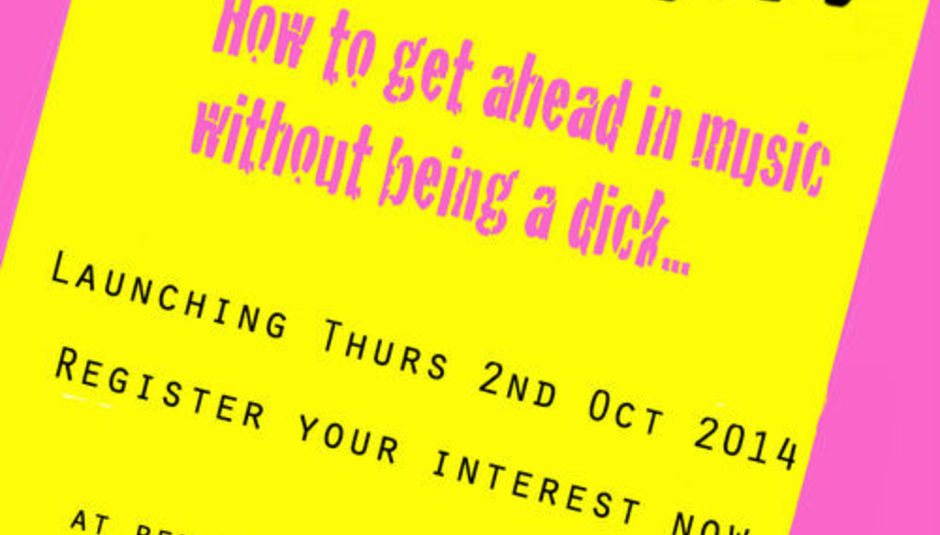 Personal acquaintances will attest that being a dick comes all too naturally to me. So when I saw that there was a free event called How To Get Ahead In The Music Industry Without Being A Dick taking place at the Red Bull Studios in London I had to investigate.

As it turns out it's not a seminar that'll curb my errant behavioural issues. In fact, it's the inaugural event from H.O.W - Helping Other Women - a collective of women from different facets of the music business who promote diversity and equality in the industry. And on October 2nd they’ll be holding an day of practical sessions and talks that aim to give people the tools needed to break into music.

To better explain the event and the reasons behind it, I sat down with two of the organisers - Deborah Coughlin (Gaggle, Feminist Times) and Ruth Barnes (Amazing Radio) - for a chat about their hopes for the day, how hard it is to change attitudes and little man balls.

Hey! So how did ‘How To Get Ahead In The Music Industry Without Being A Dick’ come about?

Deborah Coughlin: There'd been a general desire to do something like this for a while. Myself, Claire Southwick (Transgressive) and Ruth had been talking about it for years. We just felt some of the official events for women fell short. And didn't offer practical help to compete in an industry where we're traditionally sidelined. So I asked loads of ladies I admire from a cross-section of the industry to meet up, including Emma Sexton from SheSays, Hannah Phillip from East London Fawcett and Ruth - who represents Sound Women - to tell us about their respective organisations and provide some inspiration.

Ruth Barnes: I'm constantly being asked to speak on panels and there is a lot of sitting around, bitching about how bad it is for women in the industry. But we were fed up with that, I mean I love a good moan, but we've reached a point where enough is enough. At the beginning it was kind of fun, because I was meeting lovely people and we were sharing our experiences. But then it's like...we need to start doing something to try and make a difference rather than just whinging.

So why do you think it's taken so long for an event like this to happen?

RB: It’s quite easy for people to sit back and look at Adele or Emeli Sande or Beyonce or Miley Cyrus who are all massive pop divas making shitloads of money - and making statements in their own way - and not see a problem. Or for the industry to slap themselves on the back and go; "Look how many great women have been nominated for Brit Awards!". But the Brits aren't real music, it's just the entertainment industry. You might as well just tell me to look at how many great singers there are on the X-Factor. It doesn't mean anything to me. I’m interested in women who are coming up at a grass roots level and may yet make an impact. The kind of mid-rump of the industry. It's important that women coming through at that level are supported, because that's where it's difficult, that's where the hard work gets done. When you look at the explosion of really exciting female artists and bands in the '90s or even in the early '00s there was still money to put behind them and give them a leg up. But A&R men are so cynical now, they won’t take a punt on anything a little outlandish. An older artist perhaps? I mean they're not going to take a second fucking look at someone who’s 45 are they?

DC: Solutions are expensive and changing entrenched attitudes is insanely hard. Sure, we have an equal pay act but it's not enacted in real life - so laws change but culture doesn't. I mean, look at the marketing of women? Who wants to unpick that? Who wants to ponder the possibility that mass consumers; i.e. the public, you me and your mum and dad, are all basically sexist?

It feels very frustrating and rather old fashioned to still be having this conversation in 2014...Why do you think there’s a groundswell of feelings developing around this topic right now?

RB: I think it’s a case of awareness. I've definitely noticed more people talking about this major gap in the music industry and since the big bodies have got involved - like Music Week and PRS - it suddenly feels like it’s being officially recognised.

DC: A lot of people think sexism doesn't exist in music at an institutionalised level, because it’s already an incredibly competitive industry for everyone - I mean having little man balls doesn't guarantee success! But in music women are often resigned to roles with less power, especially when working their way up the ladder. While artistically they’re far less likely to reach icon status - you only have to see the under-representation of females awarded ‘NME Godlike Genius’ prize or gracing the cover of Q Magazine. Only 14% of songwriters in PRS are female and most women in music earn under £10,000 a year. If you’re a woman in the world of Classical music your chance of getting a place in an orchestra increases by 50% in a blind audition where they can't tell your gender. So all in all there is still a culture where men are taken more seriously on an artistic, technical and business level.

Quite. So who do you want to see coming through the doors on the day?

DC: Our aim is broad, from girls coming out of school to women who have been in the industry for years. It's an experiment. And in a sense just the networking possibilities and confidence boost of an event like this could be beneficial to loads of people. I know we have women from huge companies coming who you might not imagine would need something like this. But when words like 'old boys club' still get bandied about maybe there's a need for an 'old girls club' - although obviously that name is VERY unattractive.

RB: There’s definitely a focus on entry level musicians who are going into the industry and need to know their rights, because so many people get screwed in this business. And I suppose, we’re just trying to get a little branch out to those people and let them know some facts: this is what a lawyer could do for you, don't pay for radio PR, radio presenters don't want CD's anymore and most importantly...you can do this yourself. Most people are going to have to go it alone - that's just the way of the world at the moment - and they’ll need support to skill up and figure their way through this industry, cause it's a shit-show at the moment.

So is everyone welcome? Can I come, even with my...errr...little man balls?

RB: This is for boys as well! There's no way we're going to turn them away. Maybe they’re with their bandmates or they're managing an all female band. The emphasis is on this event being for women, but it's open to everyone. And we've had a great reaction from guys who are going to come. That was also our idea for the panels being a mix of genders and voices, like Sean (DiS .ed) who's probably one of the best feminists I know!

DC: Yeah, I know loads of blokes who would love this, which is why men are welcome. The facts show there needs to be a rebalance in equality and we’re trying to address that in a positive, practical and non-exclusive way.

So the line-up on the day all seem pretty fascinating...what are you most looking forward to?

RB: I just want people to learn stuff that they didn't know before. And of course it's not just for artists, it's for women who want to be agents or managers or producers. Maybe they get pregnant and get screwed over by their company because they don't want to pay them maternity leave, y'know, what are your rights? I mean, I need to know some this stuff as well!

DC: Clive Rich and Claire Southwick’s negotiating workshop because they are gonna tell us all the stuff now one teaches; how to negotiate the best deal. Which from my experience in this business is the skill I've used the most - second only to making music. Oh, and of course the party in the evening.

And after it’s all done what do you want to walk away having achieved?

RB: I hope people will come up to us later at the bar and talk about what they’ve learned. And that people leave more knowledgeable and empowered than when they arrived in the morning.

DC: This is a bit of a ‘guerilla’ girls event really. It's an intervention outside of the big music organisations - all of whom could organise their own events like this - but haven’t yet. Best case scenario is we all learn stuff that gives us greater confidence and helps us achieve more. Y’know, lots of people probably believe things are slowly getting better for women, and I don’t doubt that's true...but I want us to give it a shot of adrenaline.

The first 'How To Get Ahead In Music Without Being A Dick' takes place on Thursday October 2nd at The Red Bull Studios London.

Tickets to the event are free and it's first come first served. You can reserve your ticket here and find out more about H.O.W at their website.