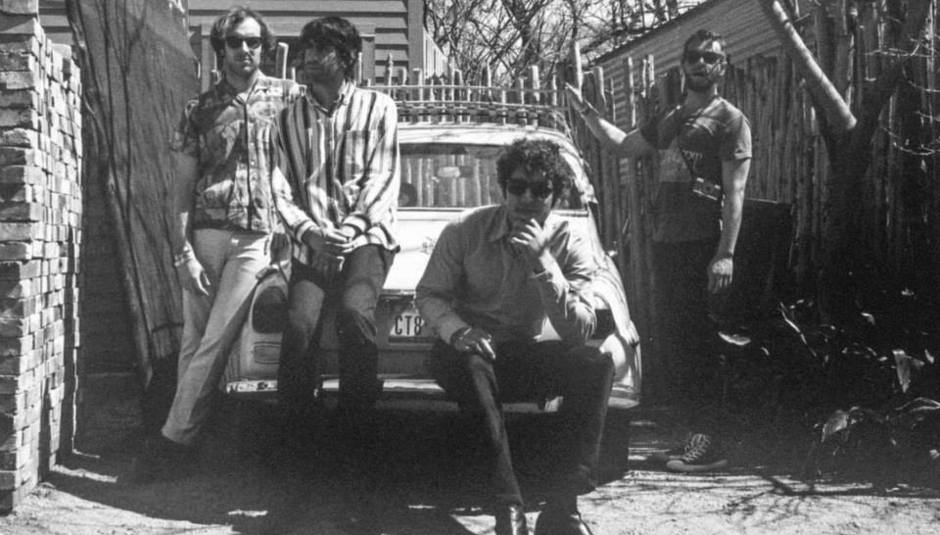 Allah-Las released their second LP Worship The Sun last week to a cavalcade of critical acclaim, including a very respectable 8/10 on these very pages. Hailing from LA, their shimmering, melodic West Coast tinged pop references the likes of The Byrds, The Zombies and late eighties English bands such as The Sea Urchins whilst still retaining a distinctive sound of their own.

The four-piece - Miles Michaud (vocals/guitar), Pedram Siadtatian (lead guitar), Spencer Dunham (bass) and Matt Correia (drums/vocals) - formed in 2008, putting out their self-titled debut four years later. Currently embarking on their most extensive tour of the UK to date including a headline slot at this weekend's Liverpool International Festival Of Psychedelia (Friday 26th September). DiS caught up with the band post-soundcheck at Nottingham's Bodega venue.

DiS: It's the third night of the tour and second show in the UK. How was last night in Brighton? Do you enjoy touring? Are you glad to be back in the UK?

Matt Correia: Last night was great. There were about 350 people there which was awesome. We've played Brighton before and it's always been good.
Miles Michaud: We're very happy to be touring again. It's something we really enjoy. It can get tiring after a while but we're going to be pacing ourselves correctly on this tour, and hopefully slow down rather than stay up late every night. We're happy to be travelling around, meeting new people and playing the new songs.

DiS: What kind of response have the new songs received so far? I guess in the age of the Internet it's inevitable people will already know them prior to the album's release.

Miles Michaud: That's right. The album only came out last week but we've been putting videos up of some of the songs for a few months now.
Spencer Dunham: Some people had their hands on it months ago. We've seen people boasting about it on the Internet Miles Michaud: Social media works in many wonderful ways.

DiS: How do you feel about file sharing? I guess it raises the band's profile if nothing else?

Miles Michaud: It's fine.
Spencer Dunham: It's just great that they like the record.
Miles Michaud: It's just part and parcel of being in a band nowadays. It's best that they listen to it on record, but if hearing it over the Internet first encourages them to go out and buy it then hopefully they'll hear it the way we'd like people to experience it.

DiS: Will you be playing the same set every night or does it vary from show to show?

Spencer Dunham: A lot depends on what the venue's like, whether there's a small crowd or a larger one, and also how we feel on the night. We have a lot of songs to choose from. We've just been playing a song in the soundcheck that we've never played live before. It's a cover of a song by The Human Expression called 'Calm Me Down'.

DiS: The first time I saw you at last year's Primavera Sound you also played a cover. Is it something you regularly try to include in your sets?

Matt Correia: Maybe. Again, a lot depends on the place and how we're feeling. We usually try to figure that out during soundcheck. We do mix things up a lot. We'll be playing a lot of different stuff on this tour, old and new. Trying some stuff out that we haven't recorded.

DiS: Will you be playing many new songs on this tour that haven't yet been recorded?

Pedram Siadatian: Original songs? No I don't think so. We do have some and we've played them live before but I don't think we'll play any on this tour. I mean, it is a possibility but it's more likely we'll throw a few covers around instead.
Miles Michaud: We have a whole cache of songs fro the beginning of our band which we'll probably never perform live again but at the same time they're still really important to us because they helped us work out our sound. Some of them were recorded so I guess they're out there somewhere, others weren't but you never know. Maybe some day?

DiS: The first song I heard by Allah Las was 'Vis-a-Vis', which I notice isn't on the setlist this evening. Has it been dropped permanently from the set?

Spencer Denham: Not permanently, but I don't really like playing it. I don't think it fits in with the rest of the songs in our set.

DiS: You're headlining on Friday night at Liverpool Psych Fest. Are there any bands you're looking forward to seeing?

Pedram Siadastian: There's a bunch of bands playing there who we played with last weekend at Levitation Festival in France.
Spencer Dunham: Christian Bland & The Revelators although I think they're playing on a different day to us.

DiS: What do you make of the increasing number of Psych Fests currently taking place around the world? Do you think it's healthy for the scene? Is there a danger it could implode at any minute?

Miles Michaud: It's a good thing. It shows people are getting into really cool music and listening to a lot of new bands. We couldn't really ask for any more so there's definitely no protest from me.

DiS: It is quite a broad spectrum. There are probably as many electronic artists making psychedelic music as there are guitar bands. Do you believe there is room for both in the scene?

Miles Michaud: Definitely. When I hear a band like Peaking Lights it feels like they're bridging the gap between the two.
Matt Correia: They tend to mix electronica with all sorts of sounds like Bossa Nova. It creates a really interesting soundscape, like Spacemen 3 back in the day for example.

DiS: Do you enjoy playing festivals? I guess they're good for attracting new listeners who may have previously been unaware of your band.

Miles Michaud: There's always going to be people that have never seen us before until we play at a festival. We had one guy come up to us recently saying he'd never heard our music before he saw us at some festival or another, so it's always really nice when that kind of thing happens.

DiS: Your second album Worship The Sun came out last week. Are you satisfied with how the record turned out?

Miles Michaud: We're always a bit apprehensive when a new record comes out, holding our breaths. It felt like we were holding it for half a year because that's how long it took to turn it in before the record came out.
Spencer Dunham: It's just really nice to get the record out there. Put it behind us and focus on new things.
Matt Correia: It feels nice to have another piece of work.

DiS: How long did it it take to make the record?

Miles Michaud: It was quite a gradual process. We recorded some of the songs while we were on the road, but then we had to take them back to the studio for mixing. I guess that was the hardest part.
Pedram Siadastian: We didn't really have a set time from beginning to end. A lot of it was down to availability in the studio.

DiS: Nick Waterhouse produced Worship The Sun as with its predecessor. What did he bring to the recording process? Is he someone you'll continue to work with in the future?

Miles Michaud: He's just great at doing what he does and he's also our friend, so I think we'll definitely work with Nick again in the future. Dan Horne from Beachwood Sparks also worked on the record. I guess we're lucky to have so many good friends. Imaginative people who know a lot about our sound. We don't know what we're going to do with the next record but Nick's top of the list. Whenever we have something new we play it to Nick first.

DiS: Looking back at your first record, is there anything you'd do differently if you had the chance to do it all again?

Miles Michaud: Nothing that's worth talking about or sharing. There's always something you'd look back on and do differently. Always. But it's a record documenting the best we could do at that moment.
Pedram Siadastian: There's no point in dwelling on stuff.
Miles Michaud: I don't really think about it to be honest.

DiS: Do you prefer working in the studio or playing live?

Miles Michaud: I really like the experience of doing both. I'm not sure which one I prefer. We've been experimenting with different styles of writing and recording so it's all just a new experience.
Pedram Siadastian: I'm glad to be in a band like this that's comfortable with both elements. I think if we just concentrated on one or the other all of the time it would end up being too much so it's a nice feeling to be able to do both. I think if we were one of those bands that spent our whole lives on tour we'd just end up irritating each other. You read about people like Brian Wilson and Arthur Lee that didn't want to go on tour and kind of realise why these bands break up.
Miles Michaud: We get along pretty well. For the most part anyway. It's definitely a challenge to do some of the things we do.

DiS: There's a lot of reference points in your sound that can be linked to bands like The Byrds and The Zombies from the 1960s or The Sea Urchins and East Village from the 1980s. With three of you having worked in a record store, did the exposure to such a wide range of music help shape your sound?

DiS: Are there any new bands or artists you would recommend Drowned In Sound and its readers listen to?

Matt Correia: The new White Fence record is really good, as is the new one from Ty Segall, Manipulator.
Spencer Dunham: The Abigails are great. They're like a country rock folk band whose songs are mainly about love, death and drugs.
Pedram Siadastian: Tashaki Miyaki. They sound a bit like Mazzy Star. We're doing a US tour with them later this year.
Miles Michaud: The Blank Tapes are really great. The Growlers too.

DiS: Finally, what are your plans for the rest of the year and beyond?

Miles Michaud: When we finish this tour we plan to start working on the next record.
Pedra Siadastian: We'll carry on making music until we die. Or at least until no one likes us any more!

Allah Las are on tour for the rest of the year. Full schedule here.

Allison from The Pierces on overcomin...