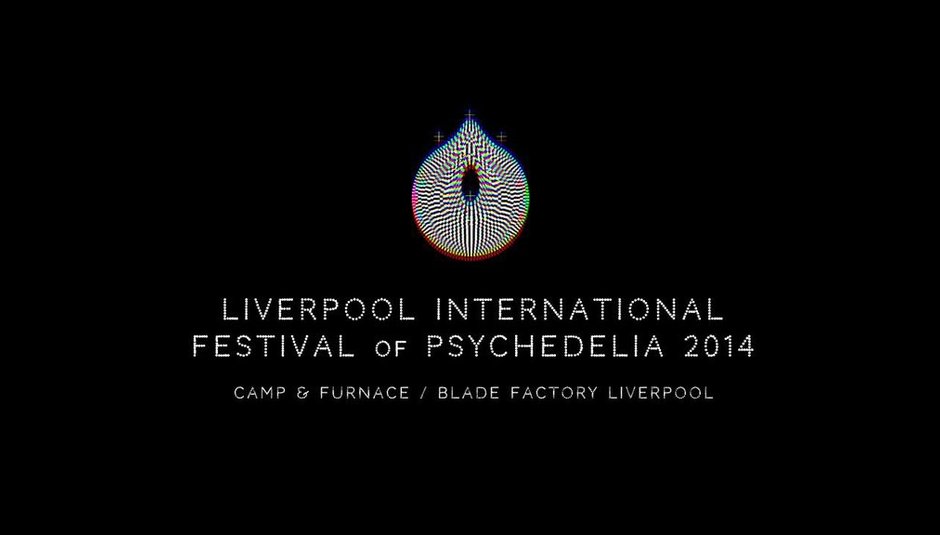 One of my most memorable weekends of 2013 came courtesy of Liverpool's International Festival of Psychedelia (aka Liverpool Psych Fest). Last year, the likes of Moon Duo, Hookworms, The Oscillation and The KVB played blistering sets to a packed Camp & Furnace.

This weekend (Friday 26th & September 27th) sees the same venue host the third edition of what's fast become Europe's leading psychedelic event. As well as a mouthwatering bill, there's also a programme of symposium-style spoken word events featuring various artists, DJs, writers and labels. Also, Manchester's Piccadilly Records have teamed up with the festival's Pzyk Skreen Print Wrkshp to create a unique record and memorabilia emporium with a difference. There's also a visual art installation courtesy of visual artist Dan Tombs and a selection of films curated by the people from Newcastle's Tusk Festival along with a full DJ programme running across both days.

Weekend and day tickets are still available here with proceedings set to commence at 5pm on the Friday.

DiS has compiled a Spotify playlist featuring 50 artists scheduled to play over the course of the weekend while also selecting our twelve must-see acts further down the page.

(Camp Stage, Friday, 2215-2300)
London-based quartet The Early Years pre-date the rebirth of psychedelia by several years. Having formed in 2004 through a mutual admiration of experimental German bands like Can, Neu! and Harmonia, their self-titled debut came out on the Beggars Banquet imprint two years later. Despite attaining recognition from various sections of the media, they embarked on a self-imposed hiatus in 2008, returning three years later with the excellent 'Complicity/Fallen Star' seven-inch for Sonic Cathedral. Live shows being few and far between these days, their set on Friday evening should not be missed.

(Camp Stage, Friday, 0015-0100)
Long-standing DiS favourites since hard-to-come-by debut Volume 1 landed on our doorstep over a decade ago. Eleven years and three albums later, the Canadian four-piece have established themselves as one of the most progressive, consistent acts in their field. Fusing post-rock structures with folk-laden melodies, their expansive sound has earned them a diverse fanbase thanks to their willingness to embrace any number of genres.

(Camp Stage, Friday, 2315-2345)
Initially the solo project of singer/songwriter Euan Hinshelwood, the addition of band members Joe Chilton (bass), Adam Beach (guitars/keyboards) and Pete Baker (drums) provided the vehicle for Younghusband to develop their sound to another level. Debut single 'Carousel' sounds like Slowdive (who they supported at their much vaunted comeback show back in May) frolicking with The Byrds on Clapham Common, while last year's debut long player Dromes found them delving into ambient, kraut-inspired pastures.

(Furnace Stage, Friday, 0045-0145)
Montreal four-piece Suuns aren't what you'd call an archetypal psych band either. Fusing electronic beats with harsh guitar sounds and dreamy harmonies, they're an anomaly of sorts but one worth sticking around for until the bitter end on Friday night.

(Furnace Stage, Saturday, 1915-2000)
One of the most unique couplings in recent times, Daniel O'Sullivan and Alexander Tucker's meanderings as Grumbling Fur take experimental music to a whole new level. Initially conceived three years ago, first album Furrier suggested the duo were anything but a conventional band, while last year's Glynnaestra highlighted them as true pioneers. Now, with third long player Preternaturals just released to another fanfare of acclai, we're mightily excited for their set here.

(Furnace Stage, Saturday, 1645-1730)
Having first come to our attention last year thanks to excellent second LP Drone Head, The Janitors have continued to make a name for themselves ever since. Hailing from Stockholm, their heady mix of shoegaze and drone rock sets them out as one of the most intense live outfits on the circuit (as anyone fortunate enough to see their set with Damo Suzuki last year at London's Shacklewell Arms will testify). This week saw them released their first new recordings of 2014 in the shape of the Evil Doings Of An Evil Kind EP. Expect to be sonically annihilated in the flesh.

(Camp Stage, Saturday, 2230-2315)
Perhaps the most unconventional band on the bill where genre definition or classification is concerned. Teeth Of The Sea exist purely in a realm of their own. Experimental to the core, their music takes in avant garde dalliances with electronica, post rock, metal and even classical styles without sounding too close to any of the above. Comparisons to Godspeed! You Black Emperor and Boards Of Canada are more like reference points in that neither of those have a specifically recognisable style or sound either. Live they're an even more inimitable experience. Avoid at your peril!

(Blade Factory Stage, Saturday, 2215-2245)
Hailing from Dublin with a penchant for fusing Spector-esque harmonies with fuzzed up, farfisa drenched excursions. DiS first encountered September Girls at a low-key Indietracks warm-up in Nottingham two years ago and we've been pretty smitten ever since. Debut album Cursing The Sea came out at the beginning of the year to universal acclaim from all sections of the media, while their live show goes from strength to strength with each passing performance.

(Furnace Stage, Friday, 2230-2315)
Three of Allah-Las were working in a record store when the band got together, which probably explains the broad spectrum of reference points ensconced within their music. Like a twenty-first century Byrds on vacation with The Zombies via Primal Scream's Sonic Flower Groove and any number of Sarah Records bands you'd care to mention, Allah-Las use their influences wisely. Where the past becomes the future, they're a distinctly recognisable force with an impressive and largely flawless output to boot. Recent long player Worship The Sun scored an impressive 8/10 on DiS. See what all the fuss is about with their Friday night slot sure to be one of the weekend's major talking points.

(Blade Factory Stage, Saturday, 2315-2345)
One of our favourite records of 2013 came courtesy of London's One Unique Signal. Aether, released last November, combined the intensity of their live shows with an experimental diversity fusing elements of post-rock, shoegaze and visceral noise. With a new EP set to be released over the coming months, they're a mesmerising experience in the flesh and one that should not be missed this coming weekend.

(Furnace Stage, Saturday, 0115-0215)
Shrouded in mystery since bursting onto the scene two years ago with their incredible debut World Music, Gothenburg collective Goat create an alluring presence both on record and in the flesh. With the band members identities still a closely guarded secret, their multi-coloured masks and costumes only add to the sonic fusion emanating from the speakers. Second album Commune is out this week. Expect a celebratory performance worthy of their bill-topping status.

DiS meets The Phantom Band: 'Are we s...

The Best Scottish Songs Of All-Time.....