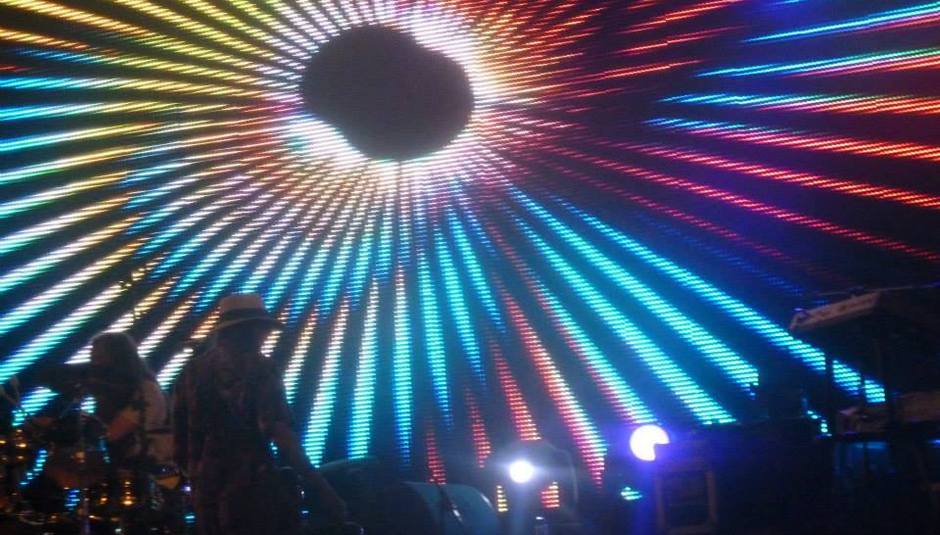 To my left, a fattened pig cooks over a charcoal fire while DJ Satan Made Me Do It plays a selection of hardcore and death metal alongside. Welcome to Reverence, the newest and arguably boldest addition to the psych rock calendar. However, don't make the mistake of thinking this is just another psych fest. It isn't. Far from it in fact, right down to the omission of the term "psych" from its moniker or any of the promotional literature.

Situated at Parque De Merendas in the village of Valada in the Santarem district of Portugal, which has an estimated population of just 900 inhabitants. Comprising three stages - one of which (the main Reverence Stage) is set in a football field once graced by the legendary Eusebio - along with a large camping area adjacent to the main site, its idyllic setting on the banks of the River Tejo a far cry from most other events of a similar nature. With over sixty artists and sixteen hours of music scheduled to run both days (Friday 12th & Saturday 13th September), its ridiculously cheap price of just 70 euros for a full weekend pass including camping also puts the majority of its rivals to shame.

And then there's the diverse music policy, encompassing a wide variety of artists from stoner rock to shoegaze, psych rock to metal and more. Rather than solely concentrating on current buzz bands from the psych genre, Reverence has uniquely compiled a line-up tracing the lineage of psychedelia. Veterans like Hawkwind and System 7 rub shoulders with young upstarts such as The Wytches and Woods, while the golden era of Creation Records is celebrated by the inclusion of Swervedriver and The Telescopes on the bill.

Indeed it's The Telescopes who start our musical journey the night before the festival begins. Playing a warm-up show alongside NAAM and Ringo Deathstarr at Lisbon's Sabotage venue, their improvised ruckus of noise and confusion is a revelation. Yet hours earlier, their appearance here or at the festival itself may not have occurred at all due to the band's drummer being unable to board his flight from the UK. Fortunately, Reverence merchandise seller John Lynch also happened to be an accomplished drummer (and we later come to realise, human dynamo on account of his relentless energy and subsequent lack of sleep), his driving backbeat only adding to the intensity conveyed by frontman Stephen Lawrie's visceral howl.

The next day, we find ourselves greeted by bright sunshine and a smattering of Portuguese acts. Barcelos-based trio Killimanjaro being the pick of the bunch, their gargantuan riffs and taut rhythmic interludes reminding us of a post-rock Sabbath. Berlin based musician Francois Sky and his hastily assembled guests including members of Helicon and 10,000 Russos may only be playing their third show together here, yet despite the odd technical hitch and mistimed start, display enough promise throughout their drone heavy set to suggest they could be ones to watch for the future.

Swedish metallers Bombus could probably tear down buildings with their intros alone, which is in stark contrast to Wooden Wand's whimsical folk that follows them. Meanwhile, Lisbon trio Sunflare fuse blues-tinged melodies with an array of pedal-induced effects like The Allman Brothers tripping on Spacemen 3. Transfixing if not quite spectacular.

California's Sleepy Sun don't stick to the rules either, transgressing several genres by way of a set that veers from errant folk to bluesy stoner rock and beyond. Buoyant singer Bret Constantino a continual focal point, their set proves captivating from beginning to end and ultimately renders them one of the highlights of Friday's already impressive programme.

Playing a mixture of new and old material, Ringo Deathstarr seem assured and full of energy after the previous night's warm-up party in Lisbon. Later on in the evening, guitarist Elliott Frazer will double up as a taxi driver ferrying bands to and from the site, even administering CPR to a stricken girl found lying in the road at one point.

As the only representatives from the UK's more mainstream-friendly psych scene, The Wytches probably had the most to prove here in front of what could have been a discerning audience. Thankfully they needn't have worried. Their ebullient amalgam of early Sub Pop meets the entire Pebbles catalogue sets heads nodding and bodies swaying in appreciation. Meanwhile, Swervedriver also remind us why they're still held in such high esteem some sixteen years after their last album came out. However, with a new record set to be unleashed soon and songs like 'Son Of Mustang Ford' and 'Duel' , no one really minds that 'Never Lose That Feeling' is omitted from this evening's setlist.

"Welcome to Black Mass!" announces Electric Wizard's Justin Osborn halfway through his band's set by way of introduction to the title track of his band's seventh album. Charismatic and engaging throughout, Osborn takes on the role as high priest of doom while casting out riffs a youthful Tony Iommi would have been proud of in Black Sabbath's heyday. Crowdsurfers gather aplenty as smoke cascades from the stage. As a spectacle, there's no more befitting way to end Reverence's opening day.

Delays with soundchecks cause the main gates to be opened 45 minutes later than scheduled, meaning each stage also runs late as a result. Nevertheless, it doesn't detract from the incredible feast of music on offer, with Barcelona's Celestial Bums providing the early thrills courtesy of their organ-led Jonestown-esque spacerock. Better still are Italian combo Sonic Jesus, who take similar inspiration then fuse them with the sonic intensity of A Place To Bury Strangers (more of whom later...) none more so than on set highlight 'Reich'.

With Texan garage rockers Holy Wave stuck in the airport due to the 24 hour airport strike in Lisbon, it's left to Portuguese instrumentalists Keep Razors Sharp to keep those in attendance entertained, which they do forthwith. Having reformed earlier this year as part of shoegaze imprint Club AC30's tenth birthday celebrations, Brighton's Air Formation tell DiS before their mid-afternoon slot today's show will be their last. Fortunately, it doesn't take long for any tears shed to change from sadness to joy thanks to rousing renditions of 'For The Hours' and 'Adrift'. So long guys, you will be missed.

Meanwhile, Exit Calm use today to showcase a couple of new songs from their as-yet untitled forthcoming third album, 'Footprints' being the stand out in a U2 circa Boy meets Only Forever era Puressence kind of way. The heat now rivalling the music for intensity, Liverpool's Mugstar bludgeon us into submission by way of their Can influenced noiserock.

Making the first of two appearances this evening, Black Angels guitarist Christian Bland and his other band The Revelators appear to be little more than a vanity project, none more so than on their cover of Buddy Holly's 'Peggy Sue' which closes the set. Not that any of that matters when A Place To Bury Strangers take the stage. Seemingly fired up and eager, they pack more energy and verve into a half hour set than young pretenders like Royal Blood will sustain throughout their entire career. Opener 'Dead Beat' sets the scene from the outset, new song 'Dead Moon Night' providing a short sharp shock for two-and-a-half minutes before Oliver Ackerman literally breaks the neck of his guitar during 'I Lived My Life To Stand In The Shadow Of Your Heart', finishing on a seismic 'Ocean' that leaves several thousand mouths wide open aghast. If there's a better live band anywhere at present we've yet to see them.

Psychic TV are a joy to behold too. Although live shows may be few and far between these days, Genesis P-Orridge has lost none of h/er captivating presence. Opener 'I.C. Water', complete with the breakdown from 'Interstellar Overdrive' as its main riff being a timely reminder why h/er band were so revered three decades ago. Not that P-Orridge would ever become complacent and become reliant on h/er back catalogue. Instead, their set references the past to push boundaries to the future.

Unfortunately, the same cannot be said for Hawkwind. As veterans of the psychedelic scene - this year marks their 45th as a band - it came as quite a surprise to learn this was their first ever show in Portugal. Featuring only one original member these days in Dave Brock, who at the ripe old age of seventy-three can still looks as comfortably assured on stage as he did during their early 1970s heyday. None more so than on a rousing 'Orgone Accumulator' that finally injects some life into a set lost on self-indulgence up to that point.

Into the early hours of Sunday morning, it's left to The Black Angels to demonstrate why they've become figureheads of the whole psych rock resurgence. Playing a career spanning set showcasing the vitality of their wares, it's the likes of 'Bad Vibrations' from 2010's Phosphene Dream and 'You On The Run' and 'Science Killer' off predecessor Directions To See A Ghost that shine like stars above the Reverence contingent basking in their glory. The perfect finale to a fantastic weekend.

U2, The Replacements and 'The Miracle...