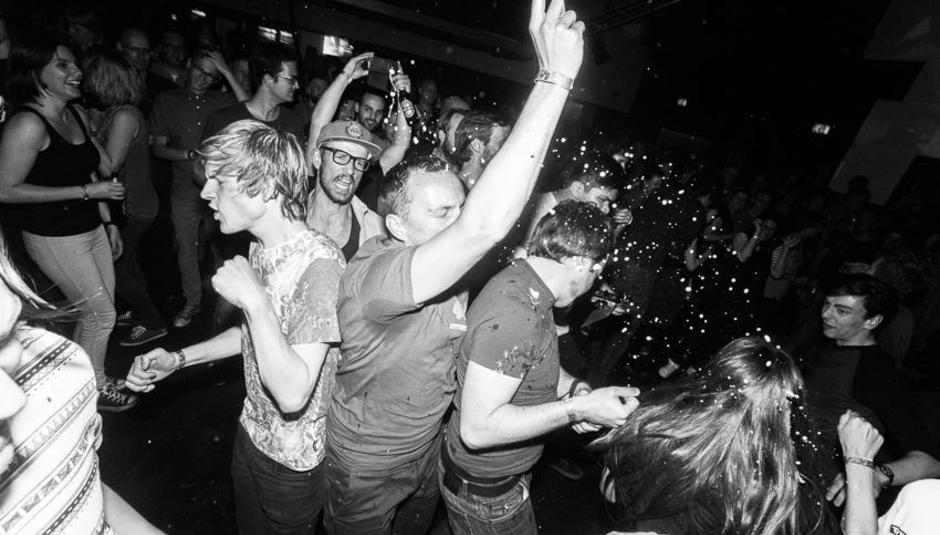 Romance is a tricky notion in music. I’m not talking about the sugar coated clichés that crop up in much of modern pop, but something deeper, more heartfelt; triumph over adversity, if you will. The sense that the right people are winning…. or, at the very least, not losing. It exists in those beautiful, fragile moments that make your soul sing or your heart ache, that convince you all will be right with the world or that nothing will ever be the same again. It has the power to transport you, to a long-forgotten past or a future glimpsed on the horizon; close your eyes and you're right there, drinking it all in (again). It’s all too fleeting, and exists mainly within the boundaries of (personal) context; people, places, and events swim through the haze of a million memories, conjured into being by the sounds filling your ears.

It’s a notion that weighs heavily on the programme for the May Day edition of Le Guess Who?, a 24-hour adjunct to a fuller festival that takes place every November. The line-up is diverse and eclectic – there’s the brash artiness of Speedy Ortiz, the DIY punk of Shonen Knife, and the soul trap bombast of Chicago rapper Tree – but two names stand out, in many ways representative of music’s past and the present; Future Islands and Neutral Milk Hotel. Both bands share a sort of insider-only, cult reputation, of the type indie aficionados wear as a badge of honour, and both engender a gleeful, fervent disbelief; an “I can’t believe they’ve got this big” and “I can’t believe I’m actually going to see them live” respectively.

Everyone I speak to is basically here to see the latter, and possessed of a childish curiosity about the former. “Is that the embarrassing dancer guy?” asks one twenty-something Utrecht native in the wristband queue, to which I shrug and reply: “Yeah… but they’re so much more.” Later, I see him pogoing around to ‘Sun in the Morning’, yet another convert to the group’s “one fan, one gig, one city at a time” ethos. There are also worried whispers about just how early people will need to turn up to be guaranteed entry for NMH; Tivoli Oudegracht may well be the biggest venue, but with The War On Drugs on beforehand there are concerns about capacity and being locked out. Some people aim for 30 minutes before, others a full hour, an unsatisfactory guessing game given the quality of the line-up and the spread out nature of the festival.

But before all that comes a long, lazy afternoon in the foyer of Tivoli Vrendenburg, a brand new, purpose built venue that’s replacing many of the city’s older music rooms. With five separate stages, a nightclub, several bars, and all the trappings of modernity, it’s an impressive building and the host of the day’s “3voor12” sessions. Alongside DJ’s and organic coffee, these pared down 15-minute sets give fans the chance to get up close and personal with some of the more esoteric acts; there’s the loose – and louche – garage rock of together PANGEA, the punk din of Big Ups, and the soft, Southern country-tinged folk of Hiss Golden Messenger. Best of all is the raw, fuzzed-out, throwback indie of Speedy Ortiz, who recall the glory days of late eighties/early nineties American college radio. While other bands seem slightly at odds with the intimate setting and the sunlight streaming through the glass walls, they’re perfectly at home as they rip through ‘American Horror’, ‘Everything’s Bigger’, ‘Basketball’, and a new song, ‘Bigger Party’. Melodic yet thrilling, there’s a glint in their eye as they attack the songs with gusto, and I glumly note that their set proper at EKKO clashes with NMH.

It’s these moments of exasperation and disappointment that provide the evening’s one major headache, and if there’s a criticism to be made of the festival, it’s that trying to see more than two or three bands – and there’s at least ten on my hit list – requires precision planning and the use of a scooter. Having neither, I jump on a bus towards Tivoli De Helling, the most remote venue, and a rendezvous with a band that have broken through in a way perhaps even they didn’t think was possible, Baltimore’s Future Islands.

“Man, it’s still light out, it’s early!” growls frontman Samuel T. Herring. “Are you ready to party? I’ve had six tequilas, I’m ready to party!” He doesn’t really need to prove that he is, of course, but he does his best to convince anybody unfamiliar with just how hard, and how intense, he approaches performing during a glorious set that draws heavily on their most recent – and best – album Singles. And as he prowls along the front of the stage, fist bumping the crowd and doing that dance, it’s hard to escape the feeling that your watching a man – and band – do what they were born to do, galvanised by finally having the stature and audience that they deserve. Manically grinning, and drenched in sweat, he looks content and vindicated, at peace with the world and his place in it.

Future Islands would be a highlight at any other one-day event like this, and if the festival hadn’t been booked so early in the year, they’d surely be in a far more prominent slot. Competing with The War on Drugs, a band being swept along on an entirely different kind of buzz, is far from ideal, even if it’s accepted with a stoic, grin-and-bear-it grace. Part of the appeal of smaller, independent events lies in stumbling across unexpected gems, or taking a chance on something because you have an hour to kill and their name sounds intriguing, but that’s not really possible here; having a few marquee names along with bands from the “new music” end of the spectrum leads to waves of people all headed in the same direction. I desperately want to catch at least part of together PANGEA or Speedy Ortiz, but there’s a greater pull towards a group that is simply unmissable.

Some say it’s better to witness a band playing at their peak rather than trying to recapture it, and it’s true, nostalgia can be a double-edged sword. But Neutral Milk Hotel are now better known, and more acclaimed, than at any time in their pomp, and it shows; the warmth of the applause as Jeff Mangum casually strolls on stage and starts strumming – what else? – ‘The King of Carrot Flowers Pt. One’ is a genuinely spine-tingling moment. There’s barely time to catch breath before Scott Spillane, Jeremy Barnes, and Julian Koster take up their positions and they’re off into ‘The King of Carrot Flowers Parts Two and Three’ and a back catalogue of rare beauty and spirit.

These are songs of honest simplicity, and the bond and camaraderie that still exists between these four old friends – and between the fans – is truly heart-warming to see. This is no Pension Tour or shameless cash-in, and they play as if possessed of a renewed energy and vigour, not to relive the past, but to forge a new future and look forward to what could be, rather than what was. There’s even a moment of wry humour as Magnum, renowned for his opposition to photography and all things digital, has a mini rant about the LCD screens at the back, next to the bar, and insists they’re turned off. Granted an encore, their set overruns by 25 minutes, but nobody hurries them along or threatens to pull the plug. Instead, a glorious stretch of songs – ‘Ghost’, ‘[untitled]’, ‘Two-Headed Boy Part Two’, and fan favourite ‘Engine’ – are blended together and met with delirium and a mass mosh pit; there’s almost nobody who isn’t bouncing merrily along, an expression of pure joy fixed on their face.

After their various individual battles with breakdowns and depression, it’s fitting to see smiles, hugs, and enthusiastic waves from all four at the end. Some head on to later gigs, most notably a typically messy Fat White Family show that apparently ends in nudity and a chaotic stage invasion, but as nothing could possibly top what I’ve just witnessed, I decline. Elated, and with renewed belief in the power of music, I head home, a fresh set of memories stored in my head for those days I need to recall a little romance.

"This album is about the future": DiS...