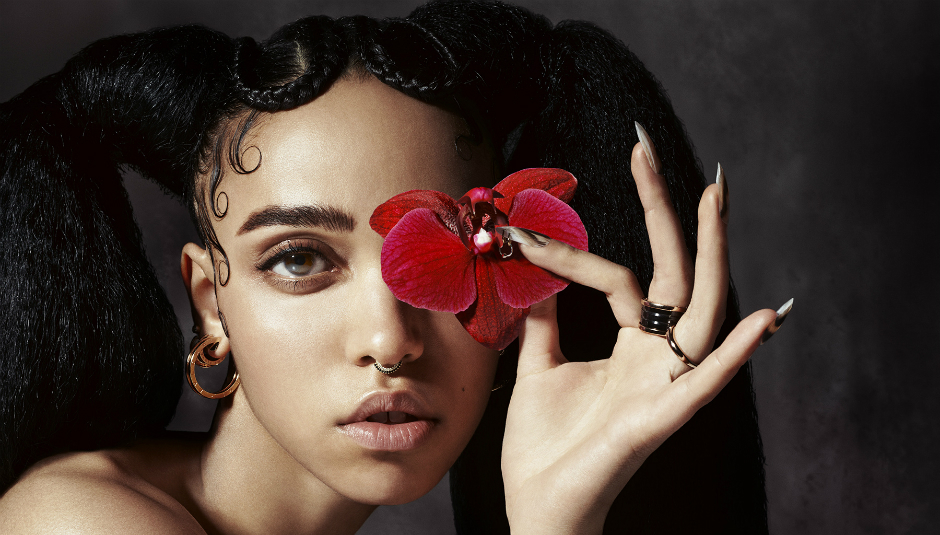 Hello there. The entire British music industry may have decamped to Worthy Farm this weekend, but someone from DiS had to stay at home and write the singles column.

On the plus side, a glut of great singles have been thrust out into the world these past seven days, so at least our suffering hasn’t been in vain. Grimes went ravey with her self-described “summer jam” ‘Go’, Ryn Weaver emerged out of nowhere to become one of the best pop things of 2014 and Rustie did what what Rustie does best.

As for Single of the Week? That belongs to the FKA Twigs’ futuristic electro swirl.

If FKA Twig’s ‘Two Weeks’ has taught us anything, it’s that we should never underestimate the power of a good swear.

After releasing a string of eye-catching videos and much-hyped EPs, Jessie J’s former backing dancer had piqued our curiosity but we were still waiting for all the pieces to fall into place. You can only be the Dazed and i-D cover star so many times before the next hip young thing pops up in your place. Especially if they've figured their way around a chorus.

Thankfully, ‘Two Weeks’ is a new age sex jam that even luddites like us can comprehend. Filthy as sin and wholly aware of its own pomposity, it’s a bawdy taster of Twigs’ forthcoming LP1. Swells of bass and synth thrust back and forth, throbbing towards a quite ludicrous climax where the shrill chanteuse declares that she's “higher than a motherfucker, dreaming of it, it's my lovin'.”

Of course, this isn’t the first time Tahliah Barnett has luxuriated in the realm of carnal pleasures. ‘Water Me’, ‘Papa Pacify’ and ‘Weak Spot’ are all pretty much concerned with doing the nasty, and by that we do mean the nasty. Twigs isn’t much concerned with love. Lust and vulnerability are her songwriting vices, and on ‘Two Weeks’ she exploits them with slow percussive intent. Falsetto sighs are rolled on top of rasping snare fills in extravagantly brash fashion so that you can’t help but gurn along.

It’s not that every Twigs song should be this silly, more that lines like “I'm healing for the shit you're dealing” help humanise her previously mystical presence. You can see the heart beneath Barnett’s highfalutin art.

A little swearing. It goes a long way, you know?

To be totally honest with you readers, we haven’t always been Claire Boucher’s biggest fans. If anaemic howling into a gust of synthy guff is your thing, then we can understand why you might have gone crazy for 2012’s Visions. As it was, we had Grimes down as ‘Lady Gaga without the tunes’ - a horrifying premonition of the Artpop era.

Having now heard and completely lost our shit to ‘Go’, we suppose this is the moment to show a bit of contrition and suck up some humble pie. Yes, that trap-pop drop is absolutely massive. Yes, that waifish falsetto line actually works quite well. And yes, that other Blood Diamonds collaboration was also not terrible.

Since ‘Go’ was written for Rihanna and purpose-made to be “kinda different from regular grimes”, we’re intrigued to see what’s next for Boucher. Whatever you made of Visions, it was a long way off from this sort of supermassive.

Charli XCX must have done something truly terrible to earn her status as non-stop hitmaker. Following on from Icona Pop’s ‘I Love It’ and Iggy Azalea’s ‘Fancy’, she’s helped pen this absolute beaut of a break-up track called ‘OctaHate’, which is probably named after singer Ryn Weaver’s eight deadly exes... if you subscribe to the School of Scott Pilgrim.

Opening on a cutesy xylophone riff, it’s quickly swept up in an almighty rush of angsty percussion. Channelling an emo Carly Rae Jepsen vibe, Weaver seems bereft of hope while mourning the loss of a total bastard. “Tossed to the loss in your love game,” she wails in righteous indignation. “You beat me cheating, and now I can't play.”

With added production work from Passion Pit’s Michael Angelakos, as well as Cashmere Cat and Benny Blanco, this song was never going to be a duffer. All the same, we remain in awe of MIss XCX’s ability to string together so many solid gold pop songs in a row. Charli, you really need to start saving some of these for your next solo album.

One day Rustie is going to get too old for his incessant 8-bit synth rolls and cascading drum beats. One day you won’t gurn along to the same vulgar theatrics you heard in ‘Slasherr’, ‘After Light’ and so many others. One day we need Russell Whyte to explain exactly why there two flamingos on the cover of his new album.

For now, we’re going to revel in the Glaswegian’s classic crash, bang and wallop. You’d hate to hear him go downtempo.

Having started out as an acoustic duo and then embraced a scuzzed up squall on last year’s June Gloom, ‘Always Boys’ sees Big Deal plough onwards with their neverending identity crisis. Careering from softly strummed sweet nothings to a Dinosaur Jr.-like thrash, it’s your archetypal lead single from a transitional (Sakura) EP - only much better than that tag implies.

“He’s a lover not a fighter, but he’s gone,” swoons Alice Costello as she grabs hold of your heartstrings by sheer force of intimacy. It’s this same trick we always fall for, whatever volume Kacey Underwood is riffing away at, and the one that ranks Big Deal as a perennially underrated act. Soon they’ll write their breakout hit, even if this isn’t it.

Apparently The Jicks’ latest single is about a feud between the former Milwaukee Bucks coach Scott Skiles and his player Brandon Jennings. They both wanted to win at the basketball, but just couldn’t get along. At least that’s what Google told us.

Will you pick up any of this by listening to the song? Of course not, Stephen Malkmus wrote it. In recompense, he’ll teach you the phrase “actually, I’m not contractually obliged to care.”