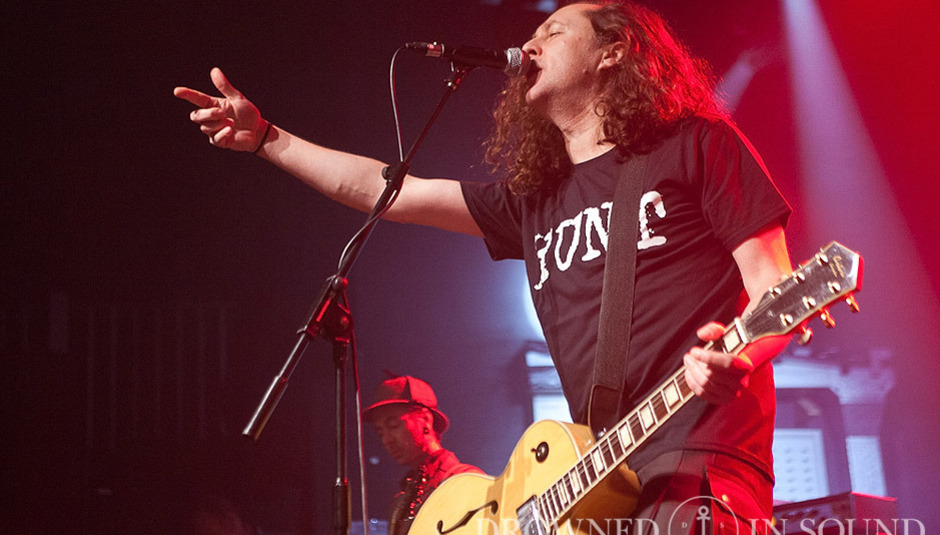 One thing that can always be guaranteed at a UK festival is the unpredictable nature of the weather, and this year's Bearded Theory proved to be no different. Not that three days of torrential rain culminating in treacherous mud baths both inside and outside the main arena managed to dampen the spirits of its 8,000 revellers.

Now in its seventh year with this being the first in its new home of Catton Park in the Derbyshire countryside, Bearded Theory has steadily developed a reputation as one of the UK's most hospitable and family-friendly events of its kind. Having picked up the gong for "Best Small Festival" at 2013's prestigious UK Festival Awards, this year's gathering would have a lot to live up to and yet weather aside, still managed to exceed all expectations.

With food and drink vendors selling local produce at reasonable prices, numerous art and craft stalls, fairground rides and arguably the largest children's play area at any UK festival (Angel Gardens) there's enough happening to keep every member of the family entertained. And that's before we even get onto the music.

In keeping with the spirit of Bearded Theory's all encompassing nature, the line-up screams diversity from the rooftops. While the emphasis appears to be on artists in the twilight of their years, that doesn't diminish anything about the quality on display. Sure, the music snob within us all might be hard pressed to find ATP falling over themselves to book such a bill, yet with over twenty million record sales between them, their past histories aren't to be scoffed at.

The first band DiS encounters have previously graced the All Tomorrows Parties stage. When John Robb resurrected The Membranes for My Bloody Valentine's 2009 shindig, they were one of the highlights of a hugely impressive weekend. So it should come as no surprise to learn they repeated the same fate here. Even in the Friday mid-afternoon slot when most revellers are still on their way or setting up camp, the four-piece manage to conjure up the most unholy concoction of angst fuelled noiserock this quaint part of England has ever witnessed.

Fellow Mancunian legend Peter Hook also brings an armoury of classics from both his New Order and Joy Division back catalogue. Playing with his band The Light - essentially his son Jack on bass and assorted members of Monaco - they tear through the more obscure relics such as 'Age Of Consent', 'Everything's Gone Green' and 'Digital' before a closing double whammy of 'Ceremony' and 'Love Will Tear Us Apart' sets things up nicely for the headliners.

Billed as their final festival show, Carter The Unstoppable Sex Machine demonstrate what an exceptionally underrated band they are. For a hit packed ninety minutes album tracks such as 'Shoppers Paradise' and 'Prince In A Pauper's Grave' sit side by side with b-side covers 'Rent' and 'This Is How It Feels'. When they wheel out the big guns like 'Sheriff Fatman', 'After The Watershed' and 'The Only Living Boy In New Cross' - all bona fide hits that gatecrashed both the singles charts and daytime radio playlists two decades ago - as timely reminders of why they were once held in such high esteem, several tears are shed at the thought of this being possibly the last time most of us congregated here will get to see them.

The next day DiS is greeted by a relentless downpour that's slowly turned the pasture from a dark shade of green to something resembling melted chocolate. Folk rockers Oysterband don't seem perturbed though, rattling through their almost greatest hits set with poised professionalism if nothing else.

Better still are the revitalised Pop Will Eat Itself. These days featuring Mary Byker (formerly of Gaye Bykers On Acid and Apollo 440) alongside original member Graham Crabb on vocals, their duelling lyrical style suiting the likes of 'Oldskool Cool' and 'Def Con One' to perfection. Former 45 'Ich Bin Ein Auslander' receives the biggest cheer, probably due to its relevance today in light of this week's European election results some twenty years after its release.

Earlier in the day, the former Gaye Byker had been muted to perform with Swamp Delta, a five-piece made up of other ex Gaye Bykers and fellow Leicester grebo punks Crazyhead. Nevertheless despite his absence, they still churned out a heady mix of selected highlights from their present and past including live favourite 'What Gives You The Idea You're So Amazing Baby.'

The Wonder Stuff follow suit, Miles Hunt and cohorts creating a minor frenzy in the muddy moshpit when delving into revered debut Eight Legged Groove Machine's annals. On another day they'd be a difficult act to supersede. Here though, veteran punks The Stranglers show why they're still going strong after all these years. With five decades of material to choose from, their ninety minute slot becomes a barrage of instantly recognisable numbers from various points of their career. 'Hanging Around' and 'Duchess' leave yours truly especially delirious, while a rare outing during the encore for 'Go Buddy Go' also proves particularly joyous.

By Sunday the sun finally appears and heart throb of the new folk scene Blair Dunlop's acoustic laments provide the perfect soundtrack. With second album House Of Jacks set to catapult him into the mainstream, it's fair to say he'll be renowned for more than just having a famous father (Fairport Convention's Ashley Hutchings) over the coming months.

Over on the main stage, The Blockheads run through a selection of their greatest hits, most notably the New Boots And Panties era which cemented theirs and late founder Ian Dury's fame. Dreadzone also bring a roots heavy momentum to a balmy Sunday teatime that sets everyone up nicely for The Orb Soundsystem to bring the weekend to a close via a technicolor mass of kaleidoscopic backdrops, body painted dancers and groundbreaking techno masterpieces in the shape of 'Little Fluffy Clouds' and 'A Huge Ever Growing Pulsating Brain That Rules From The Centre Of The Ultraworld.'

With the pop-up disco shack playing a selection of tunes ranging from Martha & The Vandellas 'Nowhere To Run' through to Bronski Beat's 'Smalltown Boy' and beyond, it further encapsulates Bearded Theory's ethos for diversity. Make sure you book your ticket early for next year, because word travels fast and as boutique festivals go, Bearded Theory is up there with the finest.