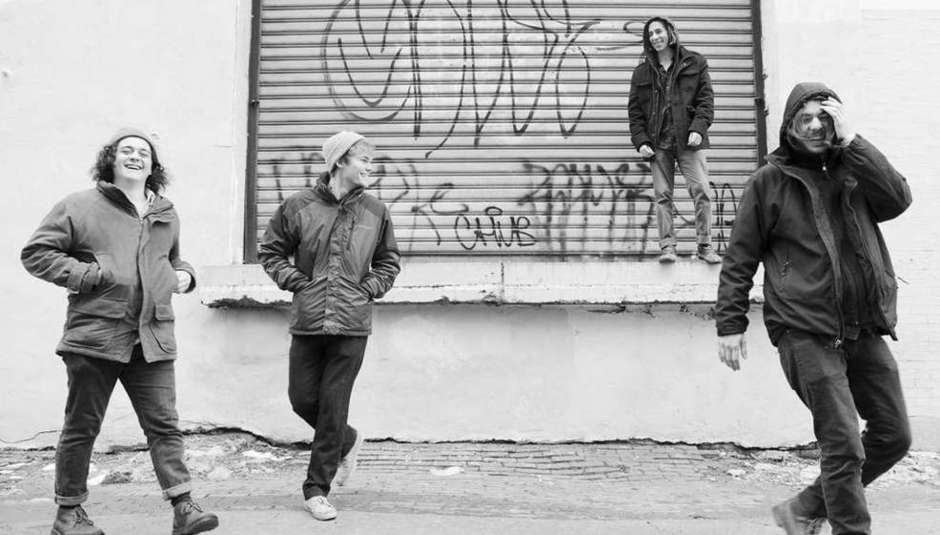 Hello and welcome to DiS Does Singles, your friendly neighbourhood new music column. Here you'll find all the latest songs from those bands that you like, and a few extras you need to get acquainted with. Pronto.

Today, Wolf Alice have whipped up an absolute racket, Lana Del Rey has made a song about a man who ain't right for her and Co-Pilgrim insisted on making us all gooey in the middle. Most importantly, we're introducing you to The Districts as a group who’ve scooped Single of the Week in astounding fashion.

Take a listen to the Philadelphia four-piece’s single ‘Rocking Chair’ and, when you’ve composed yourself again, read our in-depth interview about their self-titled EP, burritos and overcrowded apartments. It’s a cracker!

When it comes to the blues, you’ve gotta really believe in them. That’s not so easy when a former high school band arrives with a level of torment that’s usually reserved for forty-something alcoholics and World Cup penalty shoot-out losers. How are you supposed to know they’re for real, maaaaan?

Fortunately, The Districts are far too good for such nonsense. Their self-titled EP does bruised Americana like it’s the only way to play guitar and ‘Rocking Chair’ is its crowning glory. An exorcism of self-loathing that spasms through booze-soaked misadventure towards a cacophonic climax - it’s the kind of track you don’t hear all that often. A song to make you whoop in appreciation, when you’re done catching your breath.

“Ah, things ain’t what they used be be,” opines frontman Rob Grote, and he’s right. Two years ago The Districts chucked their debut album, Telephone, onto Bandcamp without much fuss at all. Reddit picked up on the astounding ‘Funeral Beds’, but that was about as much attention as the record got. It would have been so easy for the band to fade away. Instead, they returned with an absolute vengeance.

‘Rocking Chair’ is one of only two new tracks on the five-song EP, but it towers over the old, tour-hardened material. Grote’s lyrics now riff off same wisened twang as Modest Mouse’s Isaac Brock, while his Pennsylvania-born compatriots carry Kings Of Leon’s early buzzsaw energy. Tension ricochets through the song as each band member attempts to haul one another out of smalltown existence and straight into your consciousness. No wonder the whole thing climaxes in a gargantuan swirl of caustic twangs and thumping percussion.

The Districts need to be your new favourite band and, once their raucous noise subsides, they damned well better be.

So how did the band start? We heard it was in maths class.

Rob: Yeah, pretty much. I don’t know if it was actually maths class, we just bullshitted that sometime. I dunno, we were in school and all played instruments - it was one of those things. Planning to play music one time, then playing another time and then formed a band. You know?

So did you all know each other before then?

Conor: Kind of. We were just acquainted with each other, we weren’t the greatest friends, but just decided to jam one day.

Rob: Just the blues and Led Zeppelin covers and basic things that everyone could play. Me and Conor had been trying to start a band for a while but it hadn’t really been working. Then it just happened that we met Mark and Braden and our friend Josh who used to be in it, but he moved to Colorado.

I’m guessing you were all in bands before then?

How has the band changed since jamming the blues and playing Led Zeppelin?

Rob: I think the fact that we’ve been playing together for so long, so we’ve not only matured as musicians but grown to know each other’s playing style. We know where each person sits in a way.

You grew up in a town called Lititz. Could you describe it to us?

Conor: Yeah, it is pretty boring.

Rob: It’s a nice to return home to, but not a nice place to live... I dunno if you dream of returning home to it, but you definitely dream of leaving it.

So it must have been hard to find places to play?

Conor: The town we lived in was right outside Lancaster, and Lancaster has the Chameleon Club which is the biggest venue where we live. There used to be a burrito shop where we played... I don’t think they gave us free food, just shitty pay.

‘Rocking Chair’ is your new single. Do you remember where you were when you wrote it?

You said it was a ‘shitty night’. Is that where the “if I drink some more then I think I might drown” line comes from?

Rob: Yeah I guess it is. It’s like that weird feeling when you’re in a social setting and it feels like you should not be in a social setting. You can’t connect with people. I think I might might have written a couple of lines of it that night and finished it later.

In terms of the EP. Why did you want to re-release three of your old songs on it?

Rob: We didn’t re-record them, just remastered them. The label wanted to re-release that album, but we were itching to put out new music - so it was best to give some of the songs a wider release where people could hear them and also put some new ones on too.

You released Telephone through Bandcamp and now you’re on a proper label. Is it frustrating for your two year old songs to finally get some significant attention?

Rob: I don’t know if it’s frustrating. I think some people get really confused. Someone told us that one of the songs was the ‘Song of 2014’, but that’s funny for us because we put it out so long ago.

To having half-written a song at a party and now be touring the UK. That’s a pretty speedy turnaround.

Rob: Yeah it’s insane. I feel like we haven’t even processed it, we’re just moving forward at a constant pace.

Most of your songs are dark in tone. What’s the appeal of that morbid mindset?

Rob: I don’t really know. I get bummed out a lot. I guess I’m a moody person and an anxious person. Those are the moods I tend to express in art, because it’s a release for me and it’s something I feel and deal with a lot. I don’t think it’s necessarily a conscious decision. My favourite songs by other people are sad songs - those ones are the ones that hit you the hardest. I’m really drawn to the music that makes you feel something.

Do you write a lot from experience?

So how does a song like ‘Lyla’ fall into that?

Rob: That’s a song, which is more true than not… Erm, it’s about a girl leaving and moving away. It’s hard to describe it without to getting too personal.

Conor: We recorded a little bit back in April and September, but in June we’re going to go back into the studio and tweak the album. Bill Moriarty produced some of the songs... we’re still not sure if we’re going to get another producer in.

Rob: We’re hoping [to release it] for late fall, but the pace we’re going at - it’s more like midwinter. There’s definitely more of a cohesive defined sound. On Telephone from song to song, they don’t all sound like they fit together. One song would be acoustic guitar and a violin, the other electric. We’re trying to mould it into one thing I guess.

And you guys live together in Philadelphia, right?

What excites you about being a band in the moment?

Rob: Playing music is something I’ve always wanted to do and, not to sound corny, it feels like a part of me. I don’t know what else to do.

After flitting around their sound last year, Wolf Alice have co-opted the grunge-pop template and spat out a thrillingly dissonant EP. One half is custom made for Converse-clad moshers, the other soothes out the adrenaline rush with sweet acoustic-tinged mumblings. The loud songs are best, but aren’t they always?

As if to prove this, ‘Moaning Lisa Smile’ hits you square across the jawbone with titanic quantities of overdrive pedal and a chorus that teens will stomp along to en masse come festival season. Combined with the sinew-twisting anthemics of ‘Storms’, Ellie Rowsell and the rest of this London-based four-piece have enough firepower to slay your local arena. That’s sure as hell where they’re heading next.

Part-time wedding singer, full-time gangster: Lana Del Rey is eternally content to revel in orchestral melodrama. ‘Shades Of Blue’ sees her reunited with Rick Nowels, who also co-wrote ‘Summertime Sadness’ and ‘Young And Beautiful’, and the results are typically Lana Del Rey. There’s a baby who’s up to no good, trouble brewing and a damsel who daren’t turn away from it all.

As with ‘West Coast’, this latest cut from the forthcoming Ultraviolence shrugs off the clunky trappings of Born To Die to tease a properly amazing album. The one you hoped for after first hearing ‘Video Games’, except with added Ennio Morricone guitar. Now wouldn’t that be something?

Laced with grandiose strings and bittersweet harmonies, ‘I Know Love’ couldn’t be more winsome if it came wrapped in candyfloss with a special note from your one true darling. The lead single from Co-Pilgrim’s third album, Plumes, swoops around your heartstrings entwining them in the sound of country music done right. For those of us who dream of a Camera Obscura-Jayhawks collaboration, this is just the ticket.

Jungle are a band who arrived readymade for the stats-obsessed Radio 1 playlist. They’ve peddled the same gloopy, mid-paced funk since their debut single, marrying each new track with a near-identical dance-themed video.

The first time this was fresh and joyous and viral-worthy. The second time, you’d seen it the first time and now the formula is only good for stacking up further YouTube hits, of which the group have over 2 million. Whether ‘Time’ is good or bad is of no real consequence, it is familiar and that is what sells.