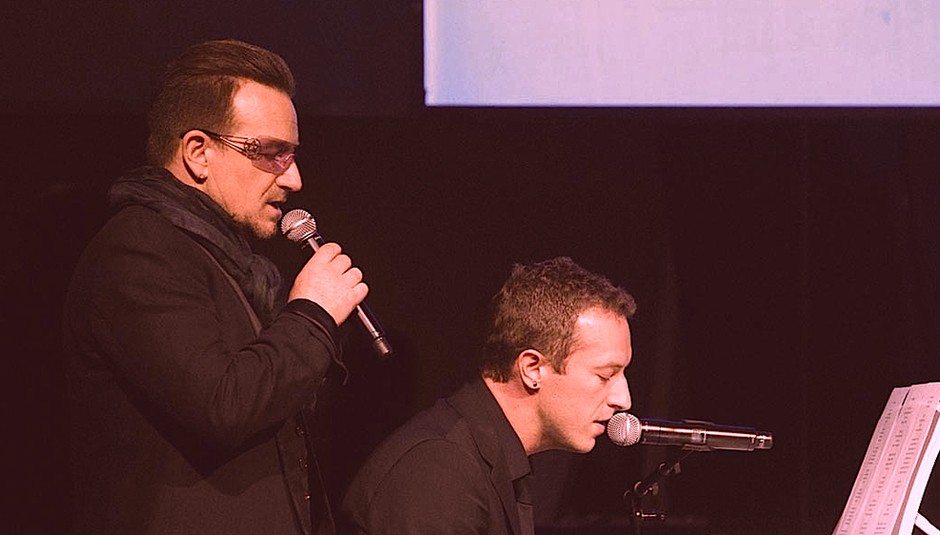 U2 vs Coldplay - Battle of the Blands

U2 vs Coldplay - Battle of the Blands

The first time I ever heard U2 was when one of their videos came on Top of the Pops and I immediately flicked a rubber band at the television screen. This wasn’t intentional (unless on a subliminal level). I had been fidgeting with the rubber band and it just pinged out of my hands. “You’ve hit U2 (sic) right on the forehead!” laughed my mother. She’d never been so proud. My hatred of U2 is, then, at least partly indoctrinated. I think my parents’ own loathing of U2 stemmed from Live Aid. As my father later observed during some Geldof-adulating anniversary rerun of the event, “Freddie Mercury’s performance was all about the crowd, whereas Bono’s was all about Bono.” Mercury might have been one of the biggest show-offs in the history of popular music but compare the footage and you’ll see the empathetic Mercury gives, gives, gives, striving to make everybody in the stadium (and at home) feel included. Bono just takes from the crowd, he sucks, sucks, sucks like a disastrously mulleted vampire. Even when he plagiarises Springsteen’s ‘Dancing in the Dark’ video from the previous year by yanking young ladies out of the crowd, it’s rather sinister how he keeps lurching in to kiss them...

I don’t remember the first time I heard Coldplay. It was probably on Radio 1’s Evening Session. They seemed completely harmless. Another Travis or Embrace. Coldplay rapidly graduated to Jools Holland. As debut Later... performances go, theirs was hardly up there with KT Tunstall’s loop-pedal theatrics or Cedric Bixler’s bold punk-rock statement of waving a chair around. Fronted by the bleating Chris Martin with his curly barnet, the young Coldplay reminded me of the weaker moments on the second Cast LP. Confounding all expectations, soon they would far exceed Cast’s success, and that of their tour-mates Embrace, and everyone else for that matter (apart from U2).

So with Coldplay’s sixth album just out and a new U2 record lurking, when DiS head honcho Sean Adams needed somebody to categorically determine which group is worse, naturally I jumped at the opportunity to listen to the entire discography of two bands I inherently dislike only to ignore most of what I’d heard in favour of ad hominem attacks on their choice of headwear and wives just so their fans can call me a bitter jealous c%$£ on Facebook. Anyway, it’s like that age-old debate, who’s worse, Adolf Hitler or Joseph Stalin a clone of Adolf Hitler?

Whose frontman is worse?

Bono, surely. Smug. Sanctimonious. Hypocritical. Flying his fucking trilby first class to Italy. Cosying up to every reprehensible, warmongering, corrupt politician under the sun, making them look hip (to people with no taste), making himself look influential (to people who don’t understand how anything works) and failing to ever change any of the world’s proper problems. And what are Bono’s most pressing global concerns anyhow? The first of his 10 ideas that might make the next 10 years more interesting, healthy or civil was the ‘Return of the Automobile as a Sexual Object’. Erm, what? If Bono wants to wiggle his dick around the interior of an warm exhaust pipe that’s his business, but he shouldn’t be encouraging the wider public to engage in such Ballardian mechanophilia.

Chris Martin is intolerable too, of course. Maybe he’ll be a little less irksome now that he’s split from that rampant quinoa junkie who’s madder than a free-range field of organic frogs and who will never be forgiven for turning up on the BBC and slagging off our crap weather and “creepy” low-key sausage-roll-based children’s birthday parties just because we don’t have the audacity to bestow every single sprog with an annual obnoxiously dazzling jamboree complete with silken marquee and real elephants.

It’s hard to get overly annoyed with Martin and his band because they’re both so dull. Is it worse to be really, really bland or really, really revolting? I’d rather eat a tub of plain yoghurt than a steaming pile of rotten eggs. I’d rather share coffee with John Major than George Galloway. But, then, whose autobiography would you rather read? Who’d you rather book for a television debate? Not that U2 aren’t bland. But they’re more fingernails-down-a-blackboard bland than tune-it-out-and-think-about-something-else bland. Coldplay are easier to ignore.

Whose fans are worse?

Both groups of fans are (and I may be generalising here) unquestioning, non-sceptic C of E, Roman Catholic, fundamentalist or other denominational Christians who wouldn’t recognise a decent spiritual song if it burst out of a gospel church and screamed ten decibels of pure soul directly into their pasty ears. Look at them stretching their hands in the air and going “ooooh” along to the chorus and taking a year out to teach the bible to foreign cultures. I don’t mean to suggest that they’re all abhorrent missionary racists (although some of them definitely, definitely are).

On the subject of indoctrination, I don’t think that any Coldplay fan has ever tried to convert me to Coldplay. This is not the case with U2 fans. U2 fans are all about the desperate, frantic insistence of “oh you must listen to the early stuff” or “I know ‘Beautiful Day’ is wank, but have you listened to the whole of Joshua Tree?”. Yes I have. It is also abundantly wank. Coldplay fans are more humble and tolerable. They know their favourite group are widely perceived as pretty rubbish, they know they ought to be ashamed of themselves, and they keep politely quiet about the whole awkward affair. They’re like secret Tories. U2 fans are, then, more annoying. But, to be fair, that’s probably because U2 are genuinely better, artistically speaking, and they probably do have some things going for them, but they always get lumped in with their lamer imitators (i.e. Coldplay).

Whose guitarist is worse?

“Hey, The Edge, this new song we’ve been jamming is pretty catchy but there seems to be some missing emotional component. It needs something more. Some je ne sais quoi that will raise the goosebumps and shiver the spines of our doting audience. Any suggestions?” “Erm... hang on... err... I know! I could put a shimmering effect on the guitar part!” “Perfect! You’re a genius, The Edge. That’s why we call you The Edge, I suppose. Could you also do it while wearing a cowboy hat and Gary Oldman’s chin?”

“Hey, Johnny, you know this new song I’ve written about how sad I am to have consciously uncoupled from that dead-eyed Cup-a-Soup-phobic actress from Sky Captain and the World of Tomorrow? It’s pretty catchy but there seems to be some missing emotional component. It needs something more. Some je ne sais quoi that will raise the goosebumps and shiver the spines of our doting audience. Any suggestions?” “Erm... hang on... err... I know! I could put a shimmering effect on the guitar part, like what The Edge does!” “Perfect! You’re a genius, The Edge. Sorry, I mean Jonny. That’s why we keep accidentally referring to you as The Edge, I suppose. Could you also do it while wearing a silly cap and wobbling your head around a bit? (But not too much, this isn’t Slayer you know.)”

Whose other two are worse?

The bassists and drummers? I wouldn’t recognise any of them if they marched up to me in the street and signed their autograph directly onto my furrowed brow. Is one of them called Larry?

Whose album covers are worse?

U2’s, obviously. They’re either pretentious photographs of U2 or black-and-white pictures of young boys. Coldplay have that one that looks a bit like Tetris.

Whose music is worse?

U2’s early stuff is edgier (no pun intended). Not as brilliant as the faithful will have you believe, mind. The young post-punk-ish U2 were never as great as the groups they imitated, they just weren’t as bad as what U2 would become. Their whole career can be virtually summed up by ‘An Cat Dubh’ from 1980’s Boy. It’s dark, spiky, weird, very Siouxsie and the Banshees. It’s interesting. And then it segues into ‘Into The Heart’, which sets the blueprint for the cheesy platitudinal anthems that would transform U2 from new wave chancers to multi-millionaire superstars who could afford to tour inside a gigantic flying lemon.

But, in Coldplay’s defence, at least they’ve never written an ill-fated piece of musical theatre based on The Amazing Spider-Man.

Coldplay are worse. U2 are more annoying. But that’s probably better than being Coldplay. But I’d rather be stuck in a lift with Coldplay. But if there was muzak being piped into the lift, I’d rather it was pan-pipe instrumentals of U2 songs than Coldplay ones. But what if we’re trapped in there for so long that we have to draw straws and Jonny picks the short straw so we have to kill him and eat him? And then when we’re finally released Martin’s career is in tatters because how can he ever find a substitute guitarist who is as proficient at replicating The Edge’s shimmering guitar sound as Jonny Buckland? And to make matters worse, Martin’s ex-wife is waiting for him when we’re rescued from the lift, and she instantly starts berating Chris for setting a bad example to little Apple and Moses by resorting to cannibalism because cannibalism is not part of any strict cleansing detox diet. And as our sickly, Buckland-nourished bodies are carried into the ambulances, we’re stretchered past a man in sunglasses who looks like an insect and he’s holding a spanner and what look like mechanical spare parts and a manual of lift instructions. And he’s humming the melody to ‘Elevation’ and giggling and waving. And as the ambulance doors are closed behind Coldplay’s lead singer and the vehicle pulls off in the direction of the hospital, the man’s sunglasses follow the path of the ambulance’s exhaust pipe as it fades into the distance. And then he stops waving, and The Fly zips up his fly.