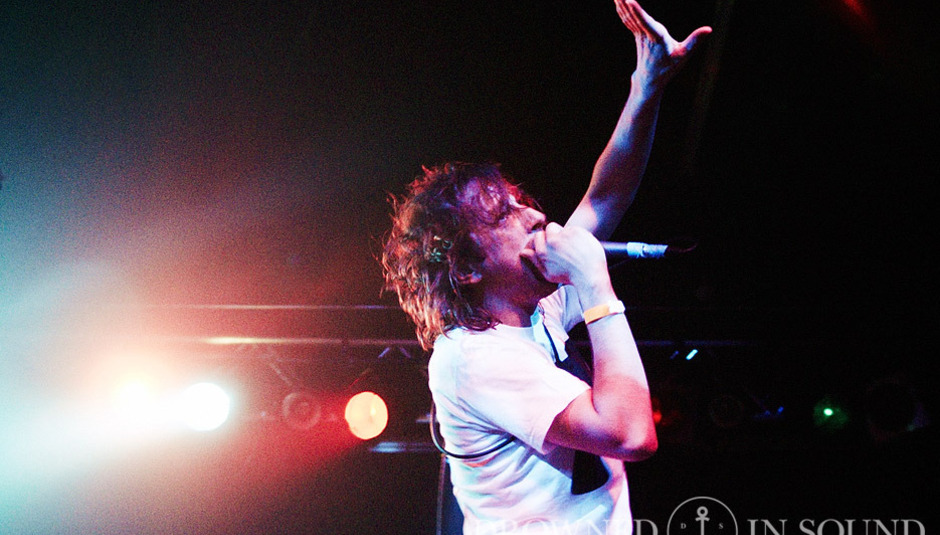 Now in its eight year, the programme for this year’s Live at Leeds reads like a dossier designed to silence the persistent detractors constantly questioning guitar music’s current wellbeing. DiS have pored over the line-up and pulled together a list of bands worth catching as you make your way around the city.

The below picks have been sorted done it in order of timing so that a route of sorts can at least be attempted. You will also notice that the early slots see a dominance from the local bands in a shrewd move by the promoters to tempt Loiners out into the venues from the off…

We would advocate starting the day in the Brudenell, where their utilising of the games room will enable attendees to get the day off to a flyer by hopping between the two stages and seeing two fine bands with minimal effort. The first of which being NARCS who released their debut album ‘Two Birds, One Stone Later’ last year via ‘Clue Records’. Clue are a new Leeds label that have been nurturing some of the greenest shoots emerging from the local scene in the last 12 months. NARCS’ wiry and brash rock and roll is unmistakably Northern, and with that their true feelings are never far from the surface; seemingly fuelled by equal parts frustration, resentment, and a general desire to just make a lot of noise. It’ll no doubt be a much needed awakener for many.

It has often felt like our friends down the road in Wakefield have been overlooked in previous Live at Leeds line-ups despite the small city housing its own positively burgeoning music scene. However this year Imp will be a fine representative with their stabs of genre-hopping playfulness encompassing ‘riff-pop’, melodic surf rock and fuzzy psychedelia. Housed on an excellent local label ‘Philophobia’, who are usually the bods behind the Merrie City’s best output, of which Imp’s recent album Moon Coastal Maine is a case in point.

Partly due to their gripping live show The Witch Hunt are one of my favourite Leeds bands from recent times and are housed on a local label ‘Dead Young Records’. Hopefully you’ve now sensed a trend here, in that there is no shortage of mini-labels in Leeds working as catalytic champions for the scene. The bright and early stage time contradicts the trio’s dark sorcerous music, the type that the likes of The Kills or PJ Harvey might have created had they been born under strange moons.

Those lucky enough to catch Sivu support Augustines at The Cockpit recently with his full band in tow will tell you that his live show is a grandiose affair of off-kilter pop, complete with subtle synths melded and killer vocals. His repertoire contains a haunting duet (I Hold) with his former tour companion Marika Hackman; and with her also performing later on in the day it would be foolish to rule out an appearance from her.

‘The Belgrave’ is the newest venue on the festival programme and a very welcome addition. The bare brick walls and wooden benches beneath toweringly high ceilings are sure to make Brooklyn composer and songwriter Ellis Ludwig-Leone feel at home. His band are one of the most exciting prospects on the bill as result of their self-titled debut album, with its stirring arrangements of kitchen-sink orchestration that would have served Sufjan and Beirut proudly. When paired with vocalists Allen Tate’s brooding Berninger baritone and Holly Laessig’s pop tones, it’s a devastating ambush of anxiety and hope.

Head back to the Brudenell to catch Domino’s new charge in the dark pummelling rock trio; The Amazing Snakeheads. The Glaswegians’ recent debut ‘Amphetamine Ballads’ is so intimidatingly in-your-face that it has you flinching from the flecks of spit from frontman Dale Barclay’s aggressive snarls and barks and that could be a realistic possibility in this intimate venue.

The Fat White Family are currently one of the most talked about bands in Britain. They’ve recently been suggested as spearheading a movement in misanthropic angst-charged rock alongside the aforementioned The Amazing Snakeheads and Leeds’ own Eagulls. However, it’s their formidable live shows that have really set tongues wagging; by all accounts the recent UK tour was a whirlwind of sordid debauchery, nudity and narcotics. And it’s with tracks like the slinky Velvet Underground-esque ‘Touch The Leather’ that they can begin to justify such antics. Whether it is a facade of counterfeit controversy or authentic anarchy you can judge for yourself, but perhaps don’t get too close!

This is the name that excited me most upon announcement and ensured my attendance at this year’s festival. There are unlikely to be many reading this that are not familiar with The Hold Steady sound. New album ‘Teeth Dreams’ hardly strays from their tried and tested formula and is neither their best effort nor is it their worst. Once again frontman Craig Finn’s inimitable outpourings of barfly wisdom and witticisms all take place within the usual late night watering holes over a backdrop of fist-raising all-American arena rock. Expect a killer party and a unified scene as the band bring Finn’s tales to life in a rapturous end to the day.

Alternatively you could ignore the majority of the above and simple take residence in the Town Hall from 6.30pm onwards for what is a very ‘DiS friendly’ line-up featuring Sam Airey, Lanterns on the Lake and I Like Trains. Headliners Forward Russia are an obvious pick and after demand for their “last ever” gig at the Brudenell far outnumbered the available tickets, they have been coaxed back into their rehearsal room again. Having been present at the initial impassioned comeback, I would not advise missing the opportunity to see them bring their post-punk tornado of jagged riffs, throbbing beats and fervent stage presence in this, their final lap of honour.