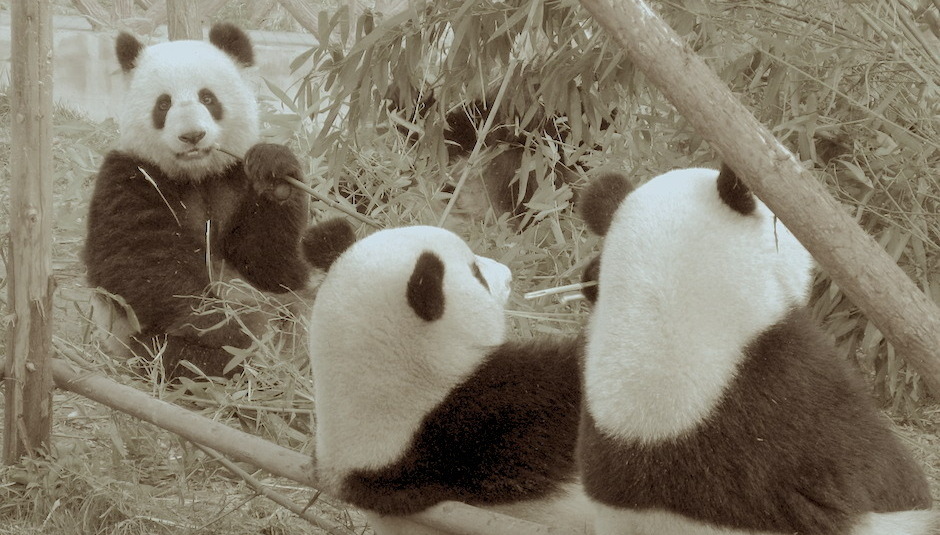 There are few small labels that have had the impact that Fierce Panda has had. From birthing stadium bands to introducing the world to cult heroes to supporting the very soil from which the grassroots grow, Simon Williams' label has done so much in the past 20 years that it's near impossible to list all of acts they've worked with without leaving out someone massive. With this in mind, we asked the man behind the label to talk us through the new compilation they've released to mark two decades of releasing debut singles, great albums and punningly entitled EPs...

We wanted to do something a bit different for fierce panda’s 20th birthday – when we turned ten years old the ‘decade:’ compilation came out loaded with the early classic panda tracks by The Bluetones, Placebo, Idlewild, Ash, Supergrass, Kenickie, The Polyphonic Spree, Death Cab For Cutie, Coldplay, Keane and Hundred Reasons. So we didn’t want to keep whoring those songs around, we wanted to capture something slightly more dignified and relevant to the label as it is now. So we decided to compile The Saddest Album In The World.

The rules were stringent: each track had to be taken off a fierce panda album or mini-album released since 2004 (but which was still valid in 2014), and each track had to have a mournful edge - the artwork does spoof ‘The Hurting’ by Tears For Fears, after all. This meant that as well as all of those early panda artistes above there was no room at the din for the likes of The Blackout, Hawk Eyes, Shitdisco, The Computers, Youthmovies, The Von Bondies, The Maccabees, Boy Kill Boy, Battle, The Parkinsons and dozens more who bravely escaped from the panda’s cage when we weren’t looking.

‘endangered: fierce panda 2004-2014’ is free to download for anyone who buys any record from the www.fiercepanda.co.uk shop right now, or available at the bargain price of £3.49 through itunes and suchlike from April 7th. Is it the longest suicide note in the world? Let’s find out shall we?

1. WOODPIGEON 'The Saddest Music In The World'

The words “Starting as we mean to” and “go on” spring not unreasonably to mind at this point. Taken from the beardy bear-like Canadian songsmith's fifth album 'Thumbtacks & Glue' (released in 2013), Woodpigeon sighs "I've lost the tune, forgot the words" over the daintiest of orchestral flourishes and ‘The Saddest Music In The World’ starts the slow ball rolling…

Dreamily sun-dappled pop from West Coast darlings who released their self-explanatory 'Milo Greene' debut in 2013. Their entire album is pretty much one long drawn-out sun-dappled, dreamy acoustic pop emotional breakdown but ‘Son My Son’ really takes the sad biscuit and dunks it in a cup of fragile misery. Their last UK show was at Latitude last summer and tweenies and 40somethings alike were utterly transfixed by those sad dunkings.

Continuing the alt.folk theme here is a low-flying highlight from the London-based bearded wonders’ 'Wolves & Thieves' album (2010). To be fair, the brilliant 'Sad Sad Stage' is actually the third saddest saddest song of all time, but that was on their second album, ‘Long Distance Sound Effects’, which we didn't release. Goldheart did however recently play through ‘Wolves & Thieves’ for the first time ever at the Lexington for one of our 20 years of fierce pandamonium shows and it was face-bendingly brilliant.

Great big clanging melancholy from New York City’s heroically dignified (that word again) gentlemen of the night. We’d been Walkmen fans since ‘We’ve Been Had’ so working on the ‘You & Me’ album in 2008 – their first after leaving Atlantic – was an insane delight. They played London ULU on October 28th that year and it snowed in Bloomsbury. That kinda gig, that kinda band.

Retromantic palavers from dapper Sheffield suit-wearers who, by some mental coincidence, actually supported The Walkmen at that snowy ULU show. ‘Would You Be Blue’ is a prime example of the quintet’s bawl-of-sound emoting and is taken from the ‘Softly, Softly’ album (2014). This band gets playlisted on Radio 2. This makes us oldsters fearsomely happy.

The newest song on the ‘endangered:…’ compilation by virtue of the fact it is on the 'Soapbox' album which is itself released a week later on April 14th 2014. The Crookes have always had a good ear for a hyperballad (see 'City Of Lights') and 'Howl' howls at the moon like a really quite woeful wolf. Incidentally, ‘Soapbox’ is The Crookes’ third full album on fierce panda, which makes them the first band to achieve that feat since Death Cab For Cutie’s hat trick of releases a decade ago.

Old school emorock weepery from boisterous Canadian quartet bemoaning the fact that they “never could throw anything away”. The song called ‘Collections’ is from the album called 'Collections' which was a joint release with the glorious roustabouts at Alcopop! Records in 2012. Coincidentally this starts a tiny bit like Elbow’s ‘The Loneliness Of The Tower Crane Driver’, which is the fifth saddest song of all time.

Here’s where it starts getting a bit hectic. Although as much as the Essex octet's barnstorming set relies upon the ferocious drive of three drummers, three bassists and a rock'n'roll ukelele, 'Made A List' revealed a sensitive underbelly to the sonic beast which was the 'Support Mistley Swans' album (2012). This song features the greatest whistling in a song since 'Blue Skies' by John Dummer and Helen April. Fact.

In a similar vein the 'Bang, Bang Rock & Roll' album of 2005 is hardly overflowing with tragic Phil Collins-esque ballads, but this bittersweet ode to sexual flounderings is a touch less abrasive than the buoyantly artrocking Art Brut norm. We also like the “I know I can / I know I can” hook which mimics Casey the wheezing circus train on ‘Dumbo’.

10. THE RAVEONETTES 'The Last Dance'

The ‘endangered:...’ collection starts perking up here, relatively speaking. From 2009’s 'In And Out Of Control', their fourth album in total and their second on fierce panda after 'Lust Lust Lust', this is the danger-seeking Danish duo in deadpan pop mode. “Every time you overdose / I rush to intensive care” kind of undermines the sparkly melodic sensibility and puts the ‘casual’ into ‘Casualty’, but that’s how they roll.

Featuring one of the all-time great basslines of all time, this was a broodingly synthetic delight from Hatcham's debut 'You Dig The Tunnel, I'll Hide The Soil' (2009). As if the tune wasn’t ace enough already the terrific DIY ‘Sidewalk’ video was filmed in the label's old office on Highbury Grove on a budget of 50 indie quids.

Continuing the leftfield theme this is a slab of oriental electronic wierdery from ex-Grammatic Owen Brinley, a man who now knows his way around a Juno 60 and who got his due rewards when his lavishly-acclaimed ‘Department M’ mini-album came out in 2013. This is a colossally lovely four minutes nailed by Owen’s gently murderous refrain of “If I could keep you closer”. That, and the very surprising saxomaphone solo.

The compilation is really zipping along now. This is a highlight of Hey Sholay’s lovingly-created live set, capturing as it does the Sheffield fivesome’s sense of cosmic melodic instinct and experimental ambition. These are people who decided, after much deliberation, to call their 2012 debut big-hearted mini-album ‘((o))’ and who, on the follow-up ‘Cloud, Castle, ____’ EP had a song called ‘If That Big Fat Yellow Thing In The Sky Was To Burn Out I Would Take You By The Hand And Float Off Into Orbit (A Song For Robert Wyatt)’ which sounded like Mercury Rev and Pink Floyd and ELO making French Fancies in Wayne Coyne’s brain. Coincidentally, ‘Holes’ by Mercury Rev is the fourth saddest song of all time.

14. THE SPINTO BAND 'They All Laughed'

It isn’t a weepathon by any stretch of the imagination, but this nippy, nifty collegiate rock jaunt from the Philadelphia collective’s ‘Moonwink’ album (2006) is suitably light of touch to illuminate ‘endangered:…’. In fact, we’ve always seen The Spinto Band as the US’s articulate answer to the megaminded Prefab Sprout, whose ‘Desire As’ is the sixth saddest song of all time.

That's the fun over with then. Back to the crushing sadness now with ‘How Bad Can It Be’, in which nominally perky French Nouvelle Vague vocalist dispenses with the otherwise poppy wonders of her 'Bye Bye Manchester' album (2013) in favour of this keyboard-led lament which makes us think ever-so-slightly of the creepy music used on Czech animations circa 1984. In a good way, of course.

The second saddest song of all time is Richard Hawley's 'Open Up Your Door'. We didn't put that out, but this is as near as we get to it thanks to Hawley's co-conspirator Colin Elliot, who worked painstakingly with Tom Hickox on this splendidly deathless piano ballad from the freshly minted and thoroughly heavyweight 'War Peace And Diplomacy' album (2014).

The greatest saddest song of all time is actually 'Bloodrush' by Bark Psychosis. Happily, I Like Trains were the nearest we got to such mournful post-rock majesty, not least on this grand song about chess Grandmaster Bobby Fischer on the 'Progress Reform' mini-album (released in 2006 and issued on vinyl for the first time in 2013). Like Goldheart, I Like Trains performed ‘Progress Reform’ in its entirety recently at the Jazz Café and, much as with this compilation, an excellently sombre time was had by all.

And so to bed, soundtracked up the wobbly stairway to sleepy heaven by ‘Sovereign’ which is so unfeasibly massive it is the last track on the 'Play For Today' comeback album of 2012, just as it is the last track here. It’s basically Ultrasound taking a mad cosmic rock journey to the moon and back, kitchen sink dramatics, crestfallen power chords, exquisitely overwrought backing vocals et al, before the entire song kind of collapses under the weight of its own enormous emotional enormity. It does have an incredibly poignant, terrifically dignified ending as well. That’s important.

Why is the album called ‘endangered: fierce panda 2004-2014’ you ask? Because we are an independent indie label in a music industry which has fallen so fast off the edge of the cliff we can’t even see the seagulls anymore. ‘endangered:’ by name, endangered by nature. And so to bed…

Pick up your copy from fiercepanda.co.uk.

Here's a YouTube playlist, with a sampler of the tracks:

In Photos: Summer Camp @ Islington As...