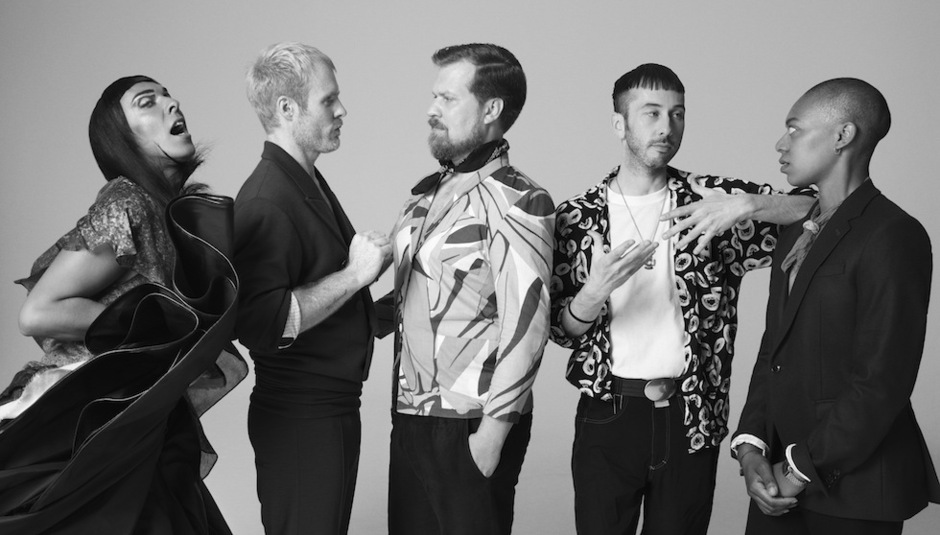 With 2011's Blue Songs running the gamut from full-blown disco and jacking house to the more experimental, Hercules & Love Affair’s new album The Feast Of The Broken Heart (out May 26) sees another musical reinvention from ringmaster Andy Butler - delivered by an impeccable new line up, including guest vocals from John Grant and Krystle Warren.

Here, Andy gives us an exclusive track by track run down of the album...

Hercules Theme 2014 was one of two songs written in the club. Rouge Mary is probably the most exciting "channeler" of the spirit/improviser that I have ever worked with. He and Gustaph have developed a bulletproof connection in our live shows and the chanting of "Hercules and Love Affair" became a regular happening at our events. So, I decided to create another Hercules Theme, this time with the aesthetic approach of the new record, it has a speak and spell in it spelling out the name and a sickening string line inspired by the cold melodies of LFO.

My Offence is probably the most provocative song on the album. No it most definitely is. Having come to Vienna with the lexicon of a queen that lived in New York for 13 years, as well as having studied feminism and gay men's english in university, I found myself carrying around a special set of words that rolled off my lips quite easily landing upon the uninformed ears of non native english speakers. I found myself having to explain the light in which i said the word "cunt". After explaining that cunt meant "beautiful, feminine, everything" numerous times to various people, I started thinking about the word and the idea of reclaiming words in general. I brought up the idea of exploring the word and the power found in reclaiming words from a feminist angle in a song to Krystle Warren, a unique queer person, who warmed to the idea immediately. The verses sing of the subjugation of the feminine, and the chorus, featuring both a quote by feminist thinker Germaine Greer- "My essence is my offense"- and the chant "Let yourself feel cunt"- directly rebuts that subjugation.

I Try To Talk To You - feat. John Grant

"I Try To Talk to You" was my first collaboration with John Grant. I asked John to dig deep with his lyrical contribution to the song. I had no idea he would dig so deep. He tackled the story of becoming HIV positive, and while I mentioned to him that he did not need to go there if he was not comfortable, in that beautifully punky, spirited and courageous way he has about him, he told me that was what the song was going to be about. What came of it is an elegant song featuring John singing and playing his heart out.

That's Not Me - feat. Gustaph

"That's Not Me" was the first of two songs of heartbreak that feature Gustaph on the album. It was actually sung initially in the studio by a big voiced Austrian vocalist named Cleo Panther. When we re-tracked the vocals in Australia with Gustaph, one of the employees at the studio, thought that there was a big diva of a female vocalist in the studio recording. Little did she know it was a pretty petite white boy. Gustaph sings house music like no other.

"Think" was a song written by Rouge Mary and myself in a hotel room after a gig in Zurich. It was our first collaboration. In my mind the song is the most unusual on the record with a kind of bouncy broken feel. The pads at the beginning were inspired by a song from a mix tape that has existed in my head since I was a 15 year old. It has the message of showing up courageously for what life brings you.; with directives like "deal", "work", "fight" in lyrics- it displays where Rouge Mary cut his chops- in church.

"5:43 to Freedom" is a song directly inspired by the sounds of house music's legendary ground zero in the 90's, the Sound Factory. More specifically- even in the song's title- is the reference to DJ Duke. Again this from a lyrical/vocal perspective the track was born in a little nightclub known as Panorama Bar. In a moment of improvisation, Rouge Mary started singing a song of freedom and liberation, over the instrumental version of the song that I decided to play one night and voila!

"The Light" was written at Mark Pistel's studio in San Francisco. It is moody techno house. It has a couple of fun crunchy old samples we found, namely the answering machine tone and the spooky slide guitar. It was tracked with another vocalist before bringing Krystle into rerecord it, who had a very high vocal range, with an affectation similar to Billie Holliday in her voice. I had concern about Krystle making it her own, but the bluesy nature of the vocal was reinterpreted perfectly and sounds gorgeous in her range.

"Liberty" is the track on the album that has a nod to Belgian New Beat. It has a very stiff and almost industrial relentlessness. John's vocal soars here, he added something I find very unique during the chorus- a background chorus of "ahhs" that step down the scale, bringing an almost Meredith Monk or Laurie Anderson feel to the song. The delivery is also that of a cooly pissed off John Grant. Something he does really well.

Do You Feel The Same? – feat. Gustaph

"Do You Feel The Same?" is the other heartbreaker on the record. I was proud to achieve "acid pop" on this track, something I had a hard time finding another example of in the history of dance music. Acid usually is featured on trax (for example the B-side to the single, "Raid"), so to achieve an acid line sitting comfortably alongside a (brilliant) vocal performance is a big deal in my ginger covered mind. Gustaph wrote some brilliant hooks on here (do ya, do ya) again proving his status as the "perfect" house music vocalist in my mind.

"The Key", the closing number on the album is a nod to jungle/drum and bass music from the early-mid 90s. I was a big Roni Size fan. I played a lot of downtempo, drum and bass and jungle in the mid 90's. I was always a fan of the more atmospheric/ambient stuff though. Here we pair a rugged drum break with some super atmospheric pads, a 303 and trombones- the only live instrument that appears on tho album. Rouge Mary sings here, offering up a very funk flavored vocal performance.

The Feast Of The Broken Heart is released on Moshi Moshi on May 26th 2014. 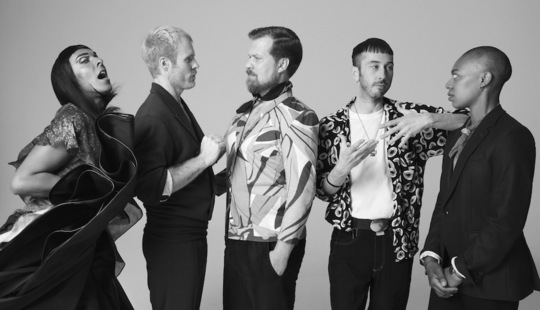