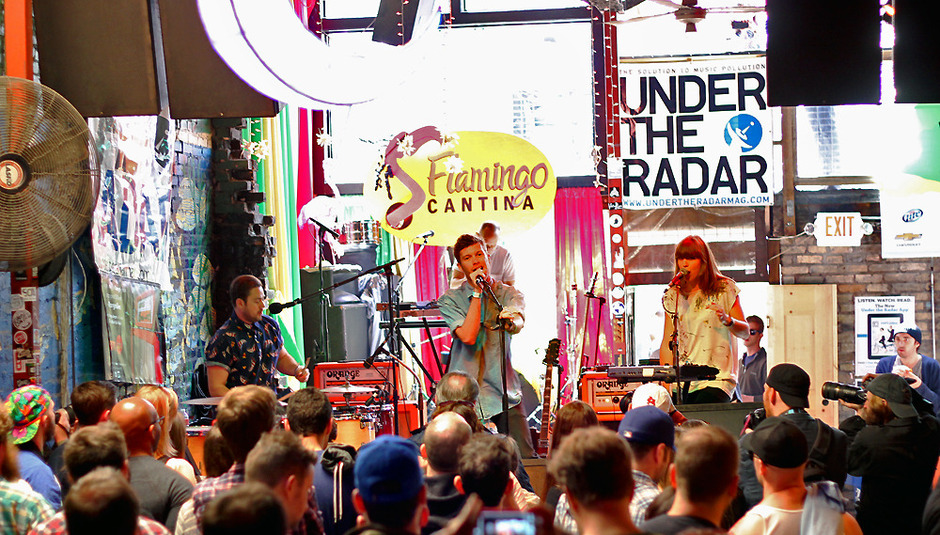 DiS wasn't at SXSW this year, but the chaps from our favourite new band of 2014 were there....

THUMPERS went to Austin, TX, played 12 shows and these are our bests (and one worst).

SXSW is 30% music, 20% BBQ sauce and 50% rumours flying around the place. “Did you hear Beiber’s playing a taco stand in someone’s basement?” / “Twin Shadow is playing a dumpster QUICK” / “Chris Cornell is resurrecting Temple of the Dog tomorrow with Snoop as a member!” (sadly only one of these actually happened). We were lucky enough to see Debbie Harry do “Dreaming” with the Dum Dum Girls and it was nothing short of spectacular. Her effortless cool.. Her voice.. Everyone could learn a thing or two from her. Spell-binding.

NOTABLE MENTION: Snoop Dogg/Lion/Zilllaaah if only for his emotionless bouncer who was as wide as a house

The sheer volume of music at SXSW is almost enough to make you numb to it all. But as soon as Annie Clark walked out on stage we knew something fucking robotically incredible was about to go down. and it really did. because she doesn’t let a little thing like wailing out awesome fuzz guitar solos stop her from singing perfectly. or performing intricate android choreography with the rest of her band. or eerily shuffling across stage like a floating broken doll. man, it was one of the best shows i think i’ve ever seen.

The reality of SXSW is if you’re playing (and busy) is that you can generally only catch who is on before or after you. We were setting up at the Under The Radar day show and as soon as these guys started my ears pricked up. I managed to catch most of their set before we had to run off but really looking forward to hearing them on record. Real nice rhythms and sounds going on and songs seemed strong too.

Ok so to nerd out for a second.. Borrowing gear can be a harrowing experience, especially for a drummer. You know that feeling when your 5’2” sister has driven your car and the seat is all just WRONG? thats the closest thing to what borrowing a drum kit feels like. not to mention that most kits are just kind of crappy and have been beaten up for hours before you. the saving grace for me was this drum kit at our KEXP showcase which was this beautiful gold sparkly vintage 60’s kit. i record with one of these so it felt like home.

Watch more video from the Top Picks channel on Frequency

We, ah, troubled the suspension on our hire car after we left this place.

Mostly because it was after our last show so we were in celebration mode.

NOTABLE MENTION: Some whiskey berry crush thing at the Driskill

We first met these guys at Reading and Leeds last year and I’ve seem them play in London since with Laura-Mary from Blood Red Shoes (who are taking them on tour right now). It's usually the case in my experience that the harder and louder and more aggressive music a band makes, the cooler the people are who make it, and also surprising how many influences you have in common. Was great to talk Rihanna and Blur with them over beers on the first night.

So after we saw the St Vincent show at Stubbs we called it a night and headed off home. We happened to walk up Red River probably a minute or so after that drunk dickhead drove down there knocking all those people down.. It was a horrific, confusing, fucked up, harrowing scene and something that is still impossible to put into words. it was before the emergency services had turned up so we had no idea what was going on, it was total mayhem. What stood out as incredible though was chance bystanders’ willingness to support strangers through this - even moments after the event had happened. if you’ve ever wondered how any city could ever possibly stand having 80,000 people show up on their streets year after year and still love playing host to SXSW then there’s your answer - genuine community spirit by the bucketload.

We played Mohawk on the Friday a few days after all the shit above happened on their doorstep and they just rolled on strong. That spirit coupled with the fact their outdoor stage with all the different levels was a blast to play and their super helpful stage crew meant the gig was pretty stress free.

In Photos: Franz Ferdinand @ The Roun...