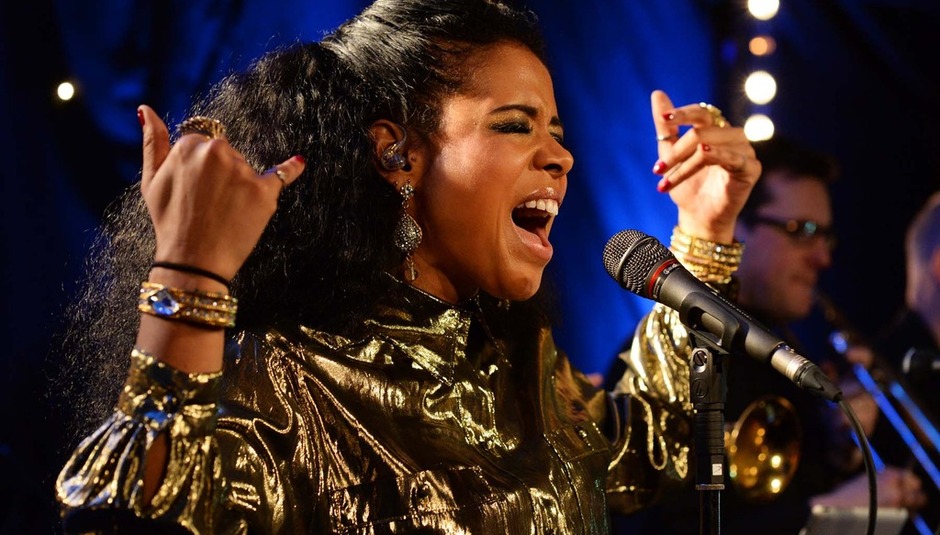 When’s she not bringing her milkshake to the yard, finding that girl’s red coat, or serving up gourmet food as a fully-qualified chef (a pursuit that granted her the opportunity recently to host her own cooking special on a U.S. cable network), Kelis Rogers still finds time to be one of the most consistently-captivating artists in the world. Her enduring cultural relevance is such that she’s still very much capable of setting the blogosphere alight with the dropping of just one track (as she did with ‘Jerk Ribs’ last month).

A household name internationally, Kelis’ glowing discography is set to grow just that little bit bigger on 21st April with the arrival of her sixth album Food. Excitingly helmed by producer-extraordinaire Dave Sitek (who Kelis described as “a divine person”) in his house in Los Angeles, the two reportedly bonded over culinary delights as much as music in what was evidently a fruitful partnership. And the end product? A thirteen-track odyssey that oversees a fusion of funk, soul, and electronica in that irrefutably-awesome Kelis way.

Following a reflective and at times rather defensive appearance on BBC Radio 4’s erudite Woman’s Hour programme earlier in the day (a fine indicator of the respect she now commands), the New Yorker’s showcase premiere of Food in the confines of Metropolis Studios in West London tonight intended to treat a recording studio’s worth of fans and music hacks to an intimate performance of the upcoming record in full. It’s an intriguing and rather important-feeling venue of choice for such an occasion, though logistically it does mean that not all of those gathered in the studio have an unrestricted view of proceedings.

View or no view, for practically everyone in attendance at this increasingly hot’n’sticky recording space it’s the first time that they’ll have heard Kelis’ new record in full. This means that audience reactions range from respectful – and sometimes premature - applause to relative hush between numbers (heckling’s a definite no-no tonight).

Eerie quietness becomes a theme for the evening from the get go. Kelis - backed by an eight-strong band (including a commanding horn section that “feels like home”) and two backing vocalists – takes to the stage - glistening in sparkling gold-tinged attire - to practically whisper as the intro to album opener ‘Breakfast’ unfurls. It sets the tone for the rest of the gig, ensuring all eyes are on the woman herself. The aforementioned ‘Jerk Ribs’ sees her channel its unshakable groove, before she takes on a more restrained yet equally-impassioned performance of ‘Hooch’, a song specifically written about her well-documented embracing of motherhood. Tonight sees the adoption of a let’s-get-down-to-business approach from Kelis and her band that means there’s little time for audience banter or general frivolities, but by the completion of Food’s iridescent closer ‘Dreamer’, it’s with a noticeable sigh of relief from all involved that the ambitious task of recreating this unreleased record in full has been accomplished rather seamlessly.

And so with the entirety of Food wrapped, there’s short introductions to her eight-piece band (assembled entirely of British musicians to assist on her short UK run) and gratitude extended to band leader and Food arranger Todd Simon, and then - and only then - does Kelis decide that the hundred-strong throng deserves something that they can knowingly get down to. Confidently striding into a cover of the Nina Simone-standard ‘Feeling Good’, she leads her band into a rendition of ‘4th of July (Fireworks)’, which sees heads go from nodding in approval to nodding in enchantment. Said nodding descends into all-out shuffling as the first bars of 2003’s ‘Trick Me’ strike up, Kelis’ effortless vocals sounding as sharp as they did over ten years ago on what is arguably one of the best pop creations of the twenty-first century. Rounded off with the insatiable sounds of the electronica-infused ‘Acapella’, it’s a fittingly-upward climax to an enlightening and aurally-delectable evening. Consider our appetites whet.