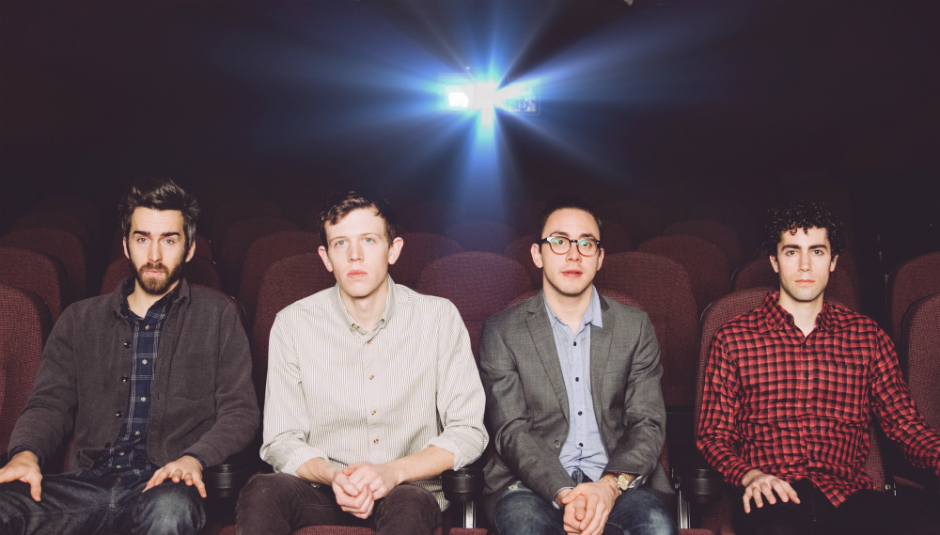 Tokyo Police Club are having a Wolfgang Amadeus... moment. The Canadian scamps with a taste for breathless wordplay and rapidfire indie-rock have a new album to their name, but it’s nothing like what you expected. Opening on a near-nine minute epic and finishing with a flurry of angst-ridden electronics, Forcefield is a giant leap forward for the quartet. Don’t panic, there are hooks a plenty too.

To find out what happened to the band behind ‘Nature Of The Experiment’ and ‘Your English Is Good’, we chatted to TPC’s bassist and lead singer David Monks. He spilled the beans on their third record, what it’s like to grow up in a rock ‘n’ roll group and why the new Star Wars movie will probably be shite. Read on for the full lowdown...

‘Argentina’ is the opening song on Forcefield and the first track you released from it. You’ve made a deliberately big statement with your comeback.

Then the next day I came in and I said, ‘Guys. This could be a three-parter, let’s do it.’

You hadn’t written a song that's anywhere nine minutes long before ‘Argentina’. Did you feel like it was a track you needed to write?

No. I just thought it was cool the way it flowed. But it wasn’t a... ‘We have to try and do this because people know us for short songs.’ A long song that sucks is no fun.

For the whole record, ‘Argentina’ was the cornerstone song of the album - even before it was three parts. It’s not the most poppy song on the record, that’s ‘Hot Tonight’ but it’s the song that has something in common with everything else.

You’ve said you wrote 50 songs for Forcefield. How did you end up with just nine on its final tracklisting?

Well the first 10 weren’t so hot, except ‘Beaches’. And then there were just a lot. We were just writing constantly. I feel like since we finished writing Forcefield I haven’t stopped writing songs.

During Champ, I was in a band and I had to write these songs with words so that we could all play. For Champ I wrote 11 songs and in this phase, I feel like I see myself as a songwriter and if I’m not doing that it’s weird because that’s my job.

So how does Forcefield compare to the two albums and EP that came before it?

It doesn’t feel transitional to me. It feels like a moment. The EP was just everything we had, and [with] Elephant Shell and Champ there was so much growing being done it was hard to keep track of everything. I feel like those albums were part of a process and Forcefield is where we were meant to end up.

In ‘Gonna Be Ready’ there’s a line about high school girls “who’d never say shit to me now.” Could you describe your high school self?

Josh and Graham were cooler than me and I met them in Grade 9… I wore girls jeans from the Gap and, er, subsequently worked at the Gap. I wasn’t introverted or shy, but I definitely wasn’t a ladykiller. I think that your world is small in high school and the prettiest girl in class is the prettiest girl on the planet. So [that line] was wondering I wonder what we’d have in common, what we’d talk about now.

So you grew up as part of Tokyo Police Club then?

Yeah, totally. I visited my girlfriend in her office the other day and it’s an ad company, it’s very professional. I noticed just being there and the way I speak and the way I scratch my head and lean back when I’m talking is very… I haven’t been in a working environment too much. I feel behaviourally different.

Tokyo Police Club formed when you were young, and your songs tend to run at a breakneck speed. Do you think the band would be different if you’d formed later?

Yeah, maybe. I think everyone’s demeanor in the band is that we don’t want to overstay our welcome. We are polite and we are Canadian and that is in the songs in a way. Sometimes it feels badass to play a song for just two minutes. Sometimes you don’t if you’re good enough to play for longer. We’re not bound by that anymore but at the beginning it was an unavoidable attitude.

Yeah. As we were writing songs for the album I was running dry on lyrics. I was like, ‘This used to be easy.’ Then I wrote ‘Miserable’ and I showed it to some friends.

‘Is this weird? It’s like such a lame lyric. It’s so direct and obvious.’

But then Doug was really into it. He said, ‘That’s good. I understand exactly what your saying in that song. The Bahamas. The miserable. I get it. Let’s make all the songs do that.’

The lyrics on Champ and Elephant Shell, they were more vibey. It wasn’t always clear what I was singing about. I feel like I learnt to let go of the one-liner. Almost every song on Champ started like that.

Whose idea was it to call the album Forcefield?

I was really sick and I was watching Stanley Kubrick’s [2001: A] Space Odyssey a lot. That got me thinking sci-fi things like ‘velocity’ or ‘transmission’ or ‘forcefield’. And 'forcefield' took on this meaning and stuck around.

No one knew what we were doing. Our label was radio silence, we weren’t getting feedback. Our manager was supportive but he was like, ‘What do you want to do? What’s the plan here?’

And I think we needed this forcefield to keep us together and on track.

So speaking of sci-fi movies. Do you think the new Star Wars films are gonna be crap?

I heard that the first script he [JJ Abrams] wrote was about the offspring of Han, Leia and Luke, and obviously they went into building sets and production and they’re getting ready. And then, last minute, they decided they’re going to change it into old Han, Luke and Leia, and their offspring are secondary characters, which seems like a bad sign if you’ve already gone so far down that track.

Like the focus group said, ‘Oh. We didn’t like those kids. We’ve gotta bring Harrison Ford back.'

It can’t be any worse than Phantom Menace though

I think it could be…

Tokyo Police Club are set to tour the UK late this month:

Forcefield is released on 24th March via Memphis Industries.

In Photos: Twenty One Pilots @ The In...