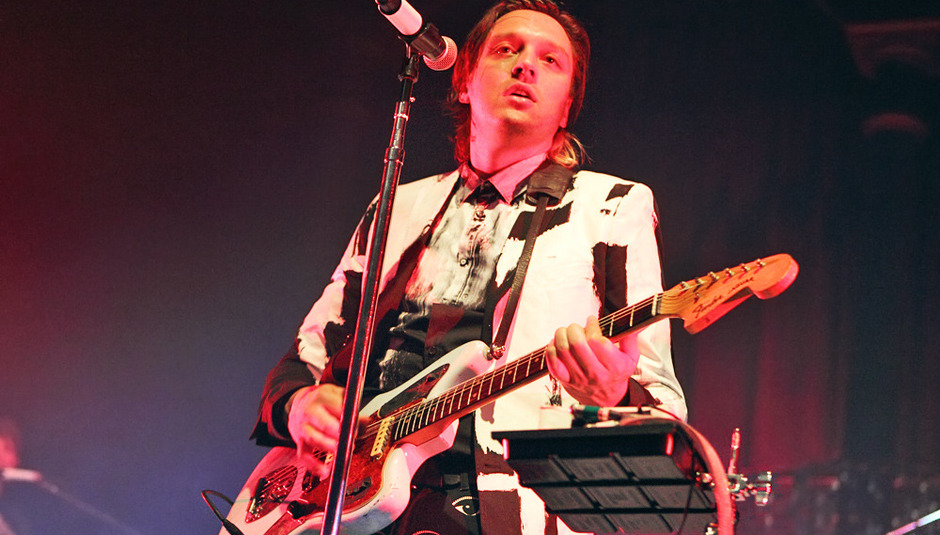 The name on the ticket says "The Reflektors" but no one is fooled, especially when faced with a big sign lighting up Camden with the words "Arcade Fire" in pink neon. The glow of electric truth aside, the name on the ticket is actually quite important - this isn’t just a comparatively intimate Arcade Fire gig, though it is that as well - it's a celebration of the band's fourth record, the just-knocked-off-the-top-spot Reflektor, and the playful tone of that album dictates this evenings entertainment, from the mariachi band in the foyer playing INXS covers (no, really) to the staff wandering about offering free face painting, and the “strict black tie, masks or costume” dress-code, which gives the whole thing the feel of a particularly good university ball.

When "The Reflektors" open with ‘Reflektor’ from Reflektor they could be accused of over-egging the pudding if it wasn’t so obviously the single of the year. Tonight it’s especially storming: the band's sacred cow status ensures the atmosphere in the room is verging on worshipful, and if you’re going to push an excited crowd into jubilation, ‘Reflektor’ is probably the song to do it. Cleverly it’s followed with ‘Neighbourhood #3 (Power Out)’ from way-back-when (“this is an Arcade Fire song” announces Win Butler). It’s a hell of a one-two punch of an opening, and essentially means the band get carte-blanche to do what they want with the rest of the gig, which is drum in the newies.

It’s to the credit of the audience’s faith and the band’s expansive live power that a set comprised of recent material (- they dip into their back catalogue only twice before the encore) can be so rapturously received, but then these songs are undoubtedly better in the flesh. On record the playfulness can come across as indulgence, even petulance, something many reviewers have been quick to note (not least DiS’ own), but live it’s all punch and energy. ‘Joan Of Arc’ is especially good, as is ‘We Exist’ (which still sounds like the closing theme from 80s cartoon classic The Raccoons) and while sadly Jonathan Ross doesn’t appear to reprise his introduction of ‘You Already Know,’ its hip-swivelling bassline is a winning party starter. ‘Sprawl II (Mountains Beyond Mountains)’ rewards the audience's patience and gives Régine Chassagne a welcome spot-light moment, but it was hardly necessary to speedbump the crowd, such is their enthusiasm, especially when followed with ‘Normal Person’s’ niggling, joyous riff.

The wheels do wobble on the cart as a cover of Devo’s ‘Uncontrollable Urge’ goes on and on, meaning ‘Here Comes The Night’ is given less patience for its meanderings than perhaps it deserves, but an explosive ticker-tape finale provides an exclamation-mark ending to what briefly threatened to be a row of dots. An encore of Funeral classics ‘Crown of Love’ and ‘Haiti’ ensure the faithful go home rewarded, the former’s last-minute gear shift from sombre to joyous chiming with the spirit of the evening. Doubts are swept aside and the point is hammered home: Reflektor works after all.