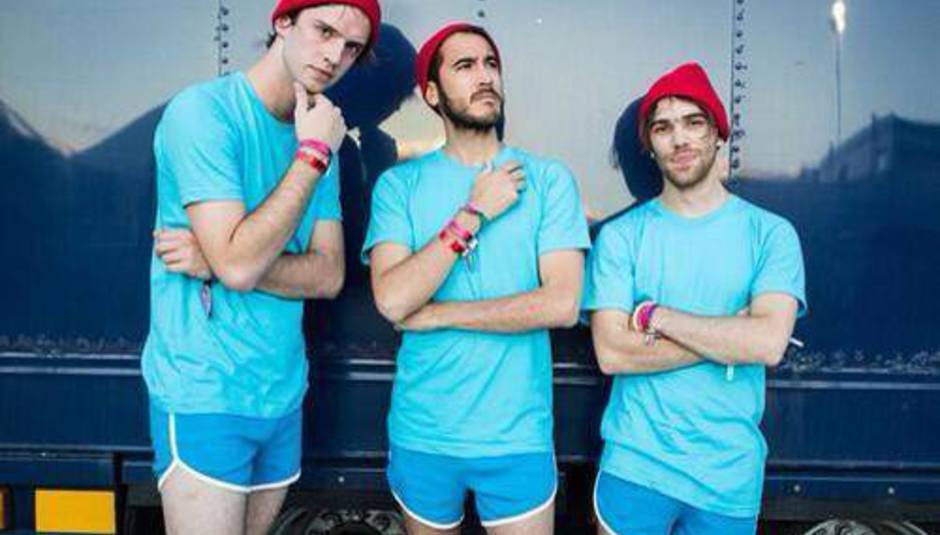 In what's been an excellent year for new music, another of 2013's greatest success stories has been the emergence of Jagwar Ma. Originally from Sydney but currently based in London, debut long player Howlin', released in August, combined the psychedelic elements of rock, pop and rave in one glorious technicolor melting pot. And yet when compared with their live show, really does only tell half the story. Weekend stealing performances at Bestival - where their set was the undisputed highlight of the festival - and Festival No. 6 not to mention turning the John Peel tent at Glastonbury into a scene from Justin Kerrigan's 'Human Traffic' by 2pm on Saturday afternoon having already attracted a legion of new found followers. It's no surprise that their subsequent UK tour has pretty much sold out well in advance, including tonight's show at Nottingham's Rescue Rooms. And on a Sunday at that, the most notoriously quiet of evenings in the city when most folks are at home watching Downton Abbey, Homeland or worse, The X Factor. Indeed it's those festival slots that have proved key towards establishing Jagwar Ma on UK shores, as songwriter, keyboard player and all round production wizard Jono Ma admitted to DiS when we spoke to him last month.

Before the headliners' arrival, South African sextet John Wizards take to the stage. Buoyed by unanimously positive reviews of their self-titled debut, it should be a breeze playing to a crowd already stoked on adrenalin and expectation. Yet, for parts of their awkward set, they seem overcome with nerves and indecisiveness. Fusing an array of influences and ideas ranging from traditional African music - frontman Emmanuel Nzaramba sings in his native tongue for most of the set - to more Western orientated styles, they're a curious anomaly. At best, similarities with Animal Collective's more experimental sojourns are drawn, particularly on the blissed out and beats heavy 'Lusaka By Night'. Other times, it does feel like being at a rehearsal, uneasy silences punctuating large parts of their half hour set while the band exchange instruments and tune up. Nevertheless, there's an abundance of hidden depths to their make up, and coupled with the promise already displayed on said album, John Wizards future looks distinctively bright despite tonight's technical hitches.

By the time Jagwar Ma take to the stage, the temperature inside the venue resembles that of a sauna. As the threesome launch into the trippy 'What Love', Gabriel Winterfield's reverb-drenched vocal combined with an ocean of electronic bleeps and Jack Freeman's throbbing bass, we're reminded of Primal Scream's earliest forays into clubland territory when Screamadelica's dance/rock hybrid was first conceived. While such comparisons slip effortlessly off the tongue, it only explains a fraction of what inspires Jagwar Ma to becoming possibly the most exciting live band on the planet right now. 'Uncertainty' and 'Exercise' both surge then retreat at oxygen-draining intervals, continually twisted and turned by improvised segments ranging from elongated instrumental passages to one referencing Sly & The Family Stone's 'Family Affair'. Techno Impala they could be. And yet their limitless attempts at pushing then transgressing boundaries holds no restrictions.

At times, Jagwar Ma's relentless energy and free spirit undoubtedly owes more to the likes of Sly Stone, George Clinton and even Lee Perry than many of the latter day Madchester reference points they've been saddled with. While their dancefloor credentials stand out like belisha beacons for all to see, Jagwar Ma have a penchant for writing celebratory pop anthems too. 'Man I Need' and 'Come Save Me' both exude an innocent charm while 'Let Her Go' bounces then shuffles instinctively at its own leisure. Unsurprisingly, the wildest response is saved for breakthrough single 'The Throw' and even though sweat is dripping off the walls and ceiling by the time Winterfield has sung the first chorus, there's no sign of the energy diminishing either on or off stage.

Returning for a two-song encore culminating in 'That Loneliness', it's clear to see Jagwar Ma were made for playing to packed out, confined spaces such as this. And what's more, should their upwardly mobile trajectory continue at the rate of knots it's currently experiencing, there's no telling where they might end up over the coming months.