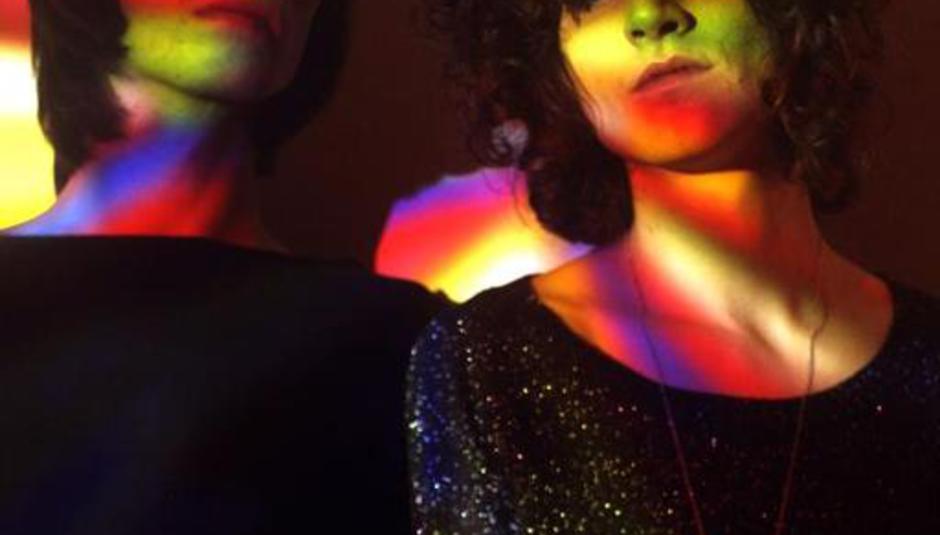 While the new psychedelic scene continues to grow, there's already divisive factions starting to appear. Many traditionalists have taken a dim view on some of the newer bands now making headway, in particular those seen as or associated with East London. With one band being called as Spacemen Zero and tonight's headliners being unfavourably compared to Kula Shaker at this year's Liverpool Psychfest, it's fair to say not everyone is celebrating the scene's vibrant rebirth.

It's something Telegram are only too aware of. Close associates of The Horrors, Toy and Charlie Boyer & The Voyeurs, bass player Oli Paget-Moon tells us afterwards he expects people to hate the band instantly. Nevertheless, they've already turned down Heavenly in favour of releasing their own records, and next month sees first single 'Follow' hit the shops. Indeed, it's interesting listening to the bassist talk so enthusiastically about Telegram. "We didn't ask to be called a psych band and we didn't asked to be grouped together with all those other bands even though some are our friends," he insists before concluding, "I don't think we are a psych band." And to some extent based on tonight's performance we're inclined to agree. Instead, Telegram purvey a heavier dynamic than the whimsical approach displayed by many of their peers. 'Rule Number 1' and aforementioned 45-to-be 'Follow' could almost be Pink Floyd had they formed in 1977. Punk Floyd even. While the likes of 'Jigsaw' and closer 'Folly' snap and bite with a raw energy beyond their creators still embryonic state. Sure, Telegram's image will turn a few heads, but is that really a bad thing? They look like a band, perform like a band, and evidently have the songs to justify the hype. Time will tell I guess...

For Temples, tonight represents the next step up on what appears to be a never ending ladder to bigger stages, larger venues and a wider audience. Although only their third show in Nottingham, the previous two have seen them support Suede in March then sell out the Chameleon exactly one month later, there's an obvious buzz around the band long before they take to the stage. Having wowed festival goers at the likes of Latitude and Festival No. 6 this summer, not to mention released two flawless singles in 'Shelter Song' and 'Colours To Life', it's no surprise to see the "Sold Out" sign hoisted above the Bodega's entrance this evening.

Originating from a smalltown such as Kettering, what's quite unique about Temples is that rather than write oikish tirades about how rubbish their lives are over three-chord riffs in stoic meat and potato fashion, they've seized the opportunity to create a glamorous netherworld instead. In some ways, they're the psychedelic equivalent of the Manic Street Preachers. Perfect hair, perfect attire, and an attention to detail both on and off stage that embodies an aura wherever they choose to tread.

However, ultimately it's the songs that will determine their destiny, and thankfully Temples have them in abundance. For anyone who's witnessed the band this year, the setlist hasn't changed that much. But at the same time, familiarity now ensures that unreleased numbers like 'Sun Structures' and 'Sand Dance' are greeted with the same level of enthusiasm as the singles. We're also greeted with a brand new song this evening, entitled 'Move With The Season'. Floating dreamily in a similar vein to 'Prisms' or 'Ankh', it represents a more detailed, experimental side ensuring the band's long awaited debut long player - due in the early part of 2014 - is already one of next year's most eagerly anticipated. That tonight's gig ends in shambolic chaos when singer James Bagshaw invites the whole audience to join him onstage during a closing fanfare of 'Shelter Song' does little to dampen the spirits. As the band cower at the back of the stage, repeatedly hugged, kissed and groped by anyone capable of getting within touching distance of them, it's clear Temples have already established themselves as the people's new favourite band.

The possibilities are endless, and with scenes like the ones which brought tonight's show to an all-too abrupt end likely to be repeated elsewhere, it's sure to be an exciting journey of discovery.